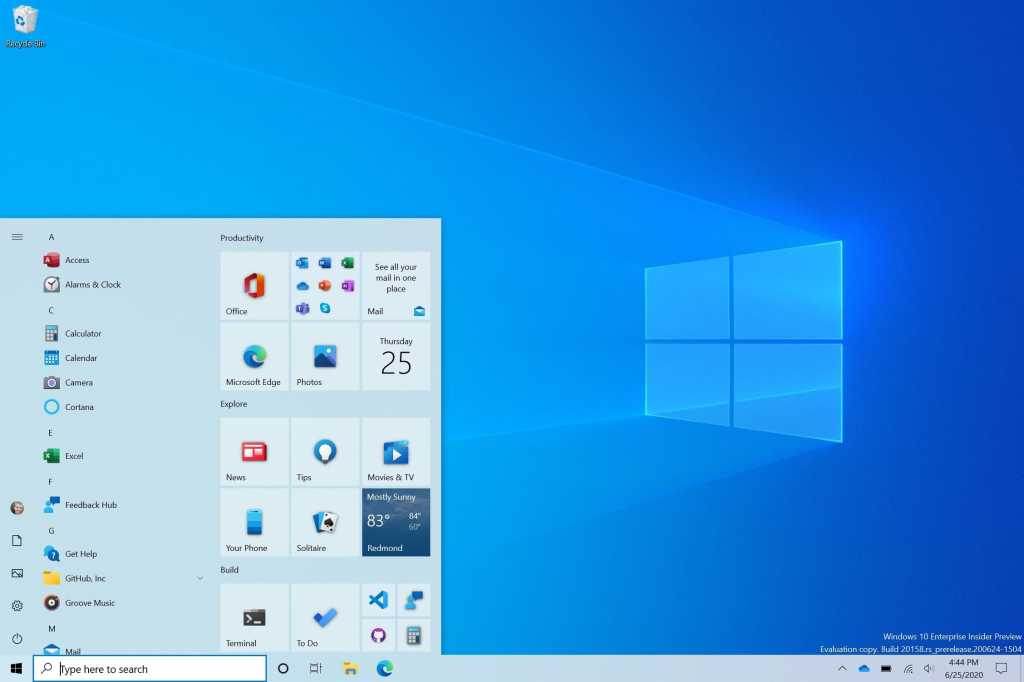 Microsoft released the new updates as part of Windows 10 Insider Build 20161, part of the new Dev Channel. Essentially, the Dev Channel is the new Insider Fast Channel—code that Microsoft is not tying to any future Windows 10 feature release. These are experiments, and Microsoft is making these features available to just a subset of the Dev Channel, too.

The experimental UI changes are fairly profound. The Start menu now includes the Fluent Design icons that Microsoft began rolling out earlier, and does away with some of the colored backgrounds that have made up the traditional Start menu. The Taskbar, too, has been redesigned in a purpose-built manner, optimized more for an individual user’s needs. Finally, the Alt+Tab experience now includes individual Edge tabs, and not just the app as a whole.

“We are freshening up the Start menu with a more streamlined design that removes the solid color backplates behind the logos in the apps list and applies a uniform, partially transparent background to the tiles,” Microsoft explained in a blog post on Wednesday.

The overall design is more reminiscent of the Windows 10X UI Microsoft demonstrated earlier this year, with a more minimalist approach that Microsoft said was deliberate.

If you’d like more color, Microsoft recommends going to the Windows dark theme and toggling Show accent color on the following surfaces for “Start, taskbar, and action center” under Settings > Personalization > Color.

Next up is the Taskbar. Microsoft said it’s experimenting with a “more personalized, out-of-box experience to give you the content you want and less clutter.” That does not mean Windows Search bar has been apparently de-emphasized, as shown here. (Brandon LeBlanc, the senior program manager for the Windows Insider Program, said the changes were made simply as an example, to show off the new icons.)

Microsoft says it’s using what it knows about you in the cloud to deliver an optimized Taskbar: an Xbox icon for those with gaming PCs, for example. But it won’t make changes to those who have existing Microsoft accounts—just new users. It’s another experiment Microsoft is making available to just a subset of the Dev Channel.

A brand-new Alt+Tab experience with Edge

A subset of testers will receive a potentially controversial change to the Alt+Tab experience. That key combination has long let you switch among active apps in Windows, but the change will add every tab within Edge as well. “We’re making this change so you can quickly get back to whatever you were doing—wherever you were doing it,” Microsoft says.

It’s not a hard-coded change. Microsoft’s usually good about allowing users flexibility, so the Settings menu (Settings > System > Multitasking) will allow you to select the last three tabs, the last five tabs, or just turn off the feature altogether and go back to the traditional Alt+Tab experience.

Microsoft is migrating the Control Panel’s System page into the Windows 10 Settings About page (Settings > System > About), continuing a trend that’s taken place over the past several years.

First, “toast” notifications in the Action Center are being simplified, so there will just be an ‘x’ in the upper right. (The gear icon goes away.) If you’ve turned on Focus Assist to block notifications from appearing, any automatic triggering of Focus Assist will not prompt a notification, either.

Second, if you have a 2-in-1 device like the Microsoft Surface Pro 7, you might recall that there’s a new “tablet” mode within the May 2020 Update, that more adroitly straddles the line between the desktop and tablet UI. Before, you had a choice between the two. For now, Microsoft is putting users into tablet mode automatically, and you’ll just have to deal with it.

Finally, Microsoft said it’s making its nifty graphing calculator available to the world at large. The Calculator app was scheduled to be released as part of the May 2020 Update, though it apparently just slightly missed that window. (Microsoft publishes apps like Calculator on their own schedule, independent of an OS release.) The Calculator app should update automatically via the Microsoft Store.