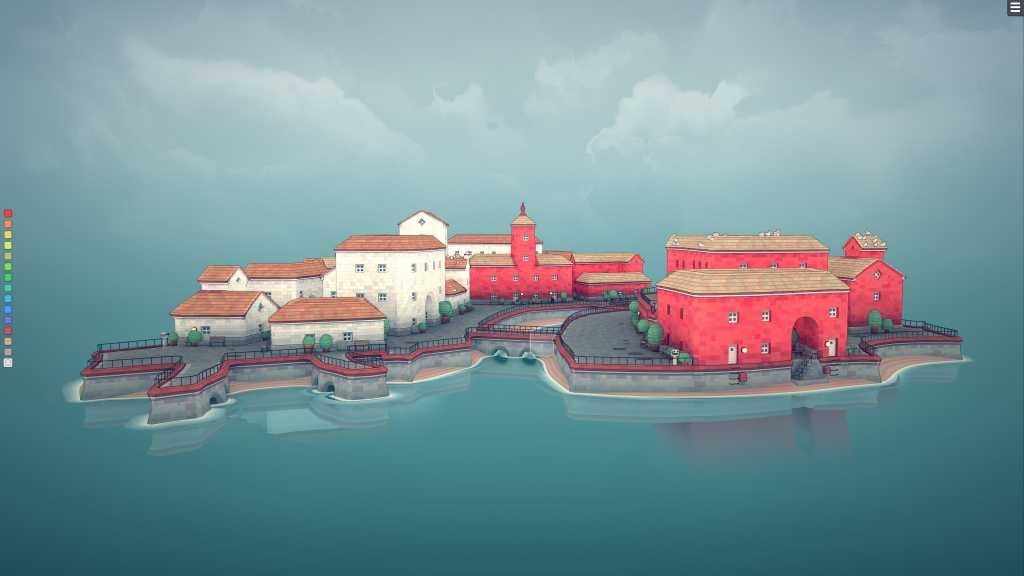 Then there was a pier, dredged up from the nothingness below the sea, a stone-and-sand bulwark battered by waves. The not-ocean grew, the pier becoming a harbor, then an island, and on that island grew houses—in white and red and purple and teal. Cottages and ranch homes, warehouses and monolithic apartment blocks, until ocean gave way to a town.

This is how the story goes in my head, at least. I’ve spent much of the last two days playing (or toying with) Townscaper, and so far I’ve learned I never needed the “Sim” part of SimCity after all.

Beneath the city two hearts beat

The games industry is not equipped to talk about games that aren’t overtly “game-y,” that don’t adhere to established tropes. Nearly a decade after games like Gone Home and Dear Esther started these conversations, we’re…still having them. And while the Gone Home subset of first-person adventures has largely been accepted (at least by critics), something like Townscaper is still bound to be controversial.

I am not interested in exploring this argument—or rather, I’m tired of having the same argument every time something comes along that doesn’t neatly fit into established genre norms. But I bring it up because you should know what Townscaper is and isn’t.

Released for $6 in Early Access on Tuesday, Townscaper has no explicit goals or win conditions. There are no points. There are no quests. There is no simulation underlying the experience, no faux-monetary constraint on your construction tool. You build because you enjoy building.

If that doesn’t sound interesting to you, that’s fine, just don’t buy Townscaper.

To me, Townscaper is the logical next step after last year’s Islanders. Billed as a “minimalist strategy game,” Islanders tasked you with placing buildings on procedurally generated islands, constructing first houses and farms, then mines and churches and docks and so forth until your town filled every possible plot of land. Progress was gated by a points system, which gave Islanders its “game” credentials.

But Islanders felt as invested in aesthetics as scoring. Sure, points mattered—but there was as much (or more) satisfaction in constructing a beautiful island getaway, placing a house just so on the seashore, or punctuating a dramatic cliff face with a towering spire. The longer I played, the more I wished I could simply experiment with Islanders sans-limitations, as an art piece.

Townscaper is what I wanted out of Islanders philosophically. It’s about architecture and aesthetics and the way humans construct livable spaces. Or rather, it’s about how those livable spaces grow from nothing.

Most builders, including Islanders, involve plopping down static structures on a grid. Here, you have your fire department. There, your university. This has become more modular over the years, and games like Planet Coaster and Planet Zoo now allow you to combine smaller props together into larger environs, but the idea is generally the same. What you see is what you get.

And so on, and so forth. There are so many edge-cases to discover, and I’m still finding new ones the longer I play. If you enclose a plot of land, a la Parisian courtyards? The cobblestones disappear and you’re left with a small patch of grass. If you build over an empty “street,” you get an archway.

Townscaper is magnificent because it’s truly a two-button game: Left Click and you add a structure, Right Click and you remove it. But those two interactions (and a dozen or so building colors) allow for near-infinite possibilities. Build a castle, or an old medieval town like Stockholm’s Gamla Stan, or a small New England fishing village. Build one massive structure or dozens. Then scrap it all and start over.

There are a lot of directions Townscaper could go in Early Access. I’d love to see people wandering the streets, or even light traffic puttering along. I’d love to build beaches and parks. I’d love to swap architectural styles, to make post-war brutalist blocks or San Francisco Victorians or even just asphalt streets.

But there’s also a part of me that thinks Townscaper is perfect as-is. Each new layer, each new mechanic, makes it more a “game” in the traditional sense and less a curiosity. There’s an argument to be made that part of Townscaper’s charm is how much is outside your control. You can’t force certain buildings to behave the way you want, and you can’t lay down a perfectly straight road. It forces you to adapt, to create a town that feels bound by real-world constraints more than anything I’ve ever built in Cities: Skylines. Does that make Townscaper better? Maybe not—but it certainly makes it interesting.

You’ll need to find your own fun with Townscaper, but then isn’t that true of most builders? Yes, it’s unsettling at first when presented with what’s essentially a blank canvas, but therein lies the thrill as well. Experiment. Discover. Create works of art with buildings as your medium. A cottage here, a lighthouse there—a balance between form and emptiness. Cities are a collection of spaces, and nowhere is that principle more obvious than in Townscaper, with its organic labyrinths of walls and streets emerging from nothingness.

Tool, toy, or game—who cares, so long as you enjoyed yourself?