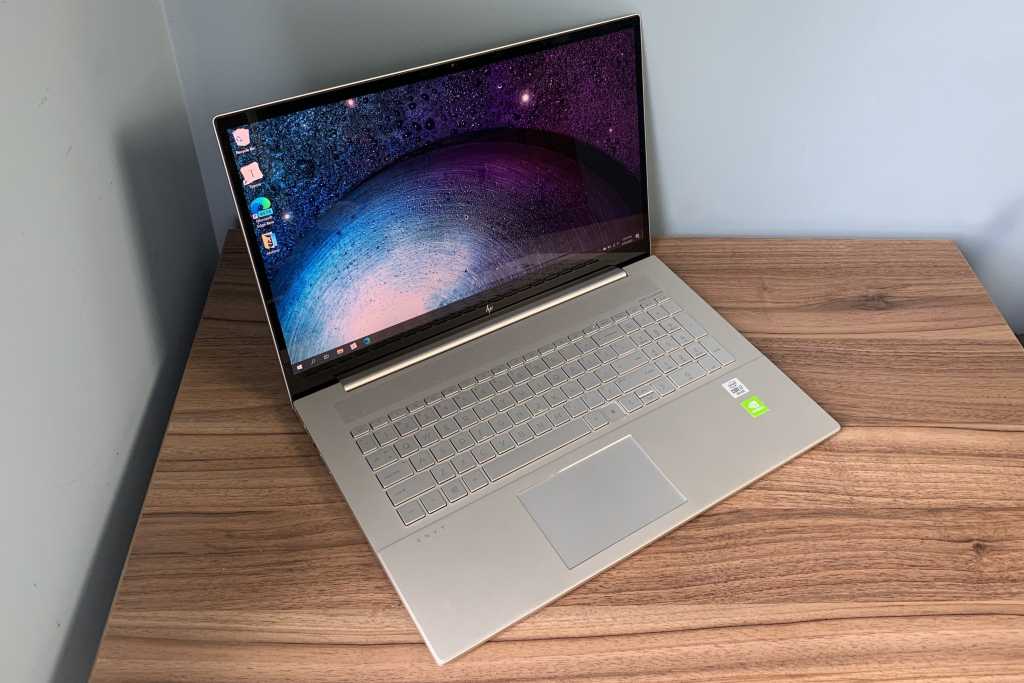 HP’s most luxurious 17-inch laptop does 4K at a lower price than some rivals, but don’t expect big performance to match.

The HP Envy 17t is another reminder that big laptops are back, and not just for gaming. Apple now sells a 16-inch MacBook Pro, forever replacing the 15-inch models in its lineup. Dell has come out with a new XPS 17 for the first time since 2011. Even LG’s Gram laptop line includes a shockingly light 17-inch version.

The Envy 17t isn’t a new product—HP’s been selling it for years—but the surge in similar models partly stems from advancements in display technology that allow for larger screens in smaller bodies. It’s also an acknowledgement of the workhorse role into which PCs have comfortably settled. Even in a world of big-screen phones, increasingly capable tablets, and ever-lighter ultraportable notebooks, jumbo laptops still fill a unique role for getting things done.

That’s certainly true of the Envy 17t. Just be aware that outfitting yourself with a 4K display this large comes with some big downsides, especially if you don’t want to spend more for better performance.

Our HP Envy 17t review unit carries a list price of $1,590 from HP.com and has the following specs:

HP’s website has some additional configurations, ranging in price from $1,050 to $1,980. An Intel Core i5-1035G1 CPU is available, and you can upgrade the MX330 graphics card to 4GB of VRAM. Memory is configurable down to 8GB or up to 32GB, and you can opt for either a 1TB SSD or a combo 256GB SSD with a 1TB hard drive. You can also get a 1080p display, with or without a touchscreen, but there’s no option for 4K with a touch panel.

Despite the size, this isn’t a laptop for serious gaming or heavy-duty media production. The GeForce MX330 graphics card exists mainly to support the 4K display, while the Intel Ice Lake CPU matches what you’ll find in high-end ultrathin laptops, such as Lenovo’s C940 Yoga 14 or HP’s Spectre x360 13t. If you need a real powerhouse, seek out a laptop with Intel’s H-Series processors and better discrete GPUs, such as Dell’s new XPS 17 or Lenovo’s C940 Yoga 15.

The port selection is pretty nice, though. HP takes advantage of the extra space that a 17-inch screen affords to provide a full-sized SD card slot—a rarity on laptops these days—and an HDMI port that can output 4K at 60 frames per second to compatible monitors or televisions. One might only nitpick the lack of Thunderbolt 3 or a faster USB-C port, as the one on board has a maximum 10Gbps transfer speed.

One other notable perk: The Envy 17t has room for a hard disk drive, though you’ll have to pry off the laptop’s rubber feet and deal with some hex screws to access the internals.

Like other laptops in the Envy lineup, HP’s Envy 17t comes in a light-gray aluminum chassis, with sharp-edged sides and a slightly raised palm rest. It also has the same the diamond-shaped pattern on its Bang & Olufsen speaker grille, which, combined with HP’s extra-large keycap lettering, gives the Envy 17t a sharp, distinct appearance.

But unlike other Envy laptops, the Envy 17t is extremely heavy and bulky, weighing over six pounds without a charger. The bezels arounds its display, while narrow, aren’t as slim as those of Dell’s new XPS 17. This laptop is meant for sitting on your desk, not for toting around—a point reinforced by the drop-hinge that props up the laptop’s body when it’s folded open. On a flat surface, this design improves airflow and makes typing comfier, but on your lap the two rubber stoppers would dig into your legs.

Still, the 4K display itself looks great, and perhaps because of the MX330 GPU inside, the Envy 17t exhibited none of the choppy animations or janky scrolling that plague some 4K laptops with integrated graphics. While the screen doesn’t support Dolby Vision HDR, we measured a peak brightness of 387 nits, which is admirable for a laptop of this size.

Here’s one unambiguous advantage of a 17-inch laptop: The keyboard makes no major sacrifices in size, and it easily fits in a number pad. The keys are on the bouncy side, but not at all wobbly—putting pressure on just the corner of any key causes the whole thing to depress. The keyboard also affords plenty of travel and gives off a slightly satisfying click. There’s hardly any flex in the laptop’s body when typed on. The only notable omission is a right Control key—HP put its fingerprint reader where the key would normally be—but it’s a stellar keyboard overall.

The trackpad falls much shorter of perfection. While it’s more spacious than what you’d find on smaller laptops, and is still somewhat clickable at the very top edge, the responsiveness could be smoother—finger movements sometimes felt jerky rather than fluid. On the upside, the Envy 17t does support Microsoft’s Precision Touchpad drivers, so it supports standard Windows 10 multitouch gestures and doesn’t have any accuracy issues, as we’ve experienced on some previous HP laptops.

HP continues to partner with Danish audio brand Bang & Olufsen on its high-end laptop speakers, and the results are predictably decent. While the sound system doesn’t match the vocal warmth or rich bass tones of Lenovo’s C940 Yoga 14—still the gold standard among high-end Windows PCs—they do get almost as loud, and offer a brightness that you don’t usually find on laptops.

Meanwhile, HP continues not to partner with any notable camera brands on its webcam, which offers 720p imagery comparable to that of most other notebooks. HP does include a privacy shutter that covers the lens, but it’s operated through software via a function row key, so you can’t flip the shutter when the computer is off.

The fingerprint reader is also a bit of a letdown. Occupying a slot on the keyboard, it’s larger than the pinky-nail-sized readers on many other laptops, and I had issues getting it to work reliably. Even after re-registering my finger, unlocking the laptop usually took a few tries with slightly different finger positions.

The HP Envy 17t certainly looks like a beefy workhorse laptop, but benchmarks reveal the truth: Except in the graphics department, the Envy 17t performs similarly to smaller laptops that weigh half as much—not surprising given the Intel Core i7-1065G7 CPU inside. But its battery life is far worse.

HP’s software compounds the matter, with a function-row key bringing up a few “Thermal Profiles” that can tweak system temperatures by throttling the CPU up or down. Our benchmark graphs are based on the default “HP Recommended” profile, which strikes a balance between performance and temperature. Choosing the “Performance” setting led to higher scores in some tests, which I’ll note in the text.

Let’s start with PCMark 8, which measures performance while simulating a variety of office tasks. We don’t have a lot of 17-inch laptops to compare with, so we’ve mixed some 15-inch laptops into our charts, along with a 13-inch laptop with the same CPU.

Any PCMark score over 2,000 is acceptable. The Envy 17t’s score of 3132 is good, though on the lower end of its cohort. It even falls behind last year’s version of the LG Gram 17, which weighs only three pounds. (We have not reviewed the latest Gram with a 10th-generation Intel processor.)

Similar results emerged in Cinebench, which tests the CPU with a quick burst of heavy performance demands. The Envy 17t’s single-threaded score of 188 is solid, but its multi-threaded score of 579 is well behind a wide range of other laptops. Switching on HP’s “Performance” mode bumped the score to 684, which is still on the lower end.

Switching between HP’s thermal profiles yielded the most dramatic results in our HandBrake benchmark, which tests a heavy workload over time by encoding a large video profile. Out of the box, the Envy 17t finished the job in a dismal 71 minutes, matching the kind of heavily-throttled performance you’d see in a much smaller laptop such as the Envy 13. Turning on HP’s “Performance” mode resulted in a much higher score of 3,146 seconds, or 52 minutes, but it’s still no comparison against a laptop with Intel’s 10th-generation H-Series CPUs, such as the Dell XPS 15 in our chart.

Graphics performance is a bright spot: The Envy 17t’s MX330 GPU’s Sky Diver score of 10,401 squarely beats laptops with integrated graphics. While ostensibly not a gaming laptop, it can squeeze out 60 frames per second at 1080p with medium graphics settings in some 3D games, including Fortnite and Deep Rock Galactic.

The real letdown here is battery life. The HP Envy 17t’s 55Whr battery is tiny for a laptop of this size, and it’s no match for a 17-inch display at 4K resolution. While looping a video file offline at roughly 255 nits’ brightness, the Envy 17t lasted only 7 hours and 11 minutes. HPs own Spectre x360 15t from 2019 lasted 45 percent longer in the same test, probably in part because its battery capacity is 36 percent larger.

All of this puts the HP Envy 17t in an unusual position. At $1,590 as reviewed, it is more affordable than Dell’s XPS 17, which costs $2,000 with comparable display resolution, memory, and storage. It undercuts Apple’s MacBook Pro by about $800.

But those are also more powerful machines with H-Series Intel processors, supporting the kinds of heavy workloads you might want to accomplish on such a large screen. If you don’t need all that computing muscle, the HP Envy 17t might have some appeal, but only if you’re unwilling to bend on the notion of a 4K, 17-inch screen.

With a bit more flexibility, the options open up. LG’s Gram 17 is an intriguing alternative with similar performance and much better battery life at half the weight. It has a lower-resolution 2560×1600 panel, but chances are you won’t notice the difference. Smaller laptops like HP’s Spectre x350 15t are worth considering as well, especially if you can connect a 4K monitor.

With the Envy 17t, you’re sacrificing a lot of portability just for the sake of that screen. While 17-inch laptops are making a comeback, an extremely heavy laptop without heavy-duty performance to match is a niche within a niche.