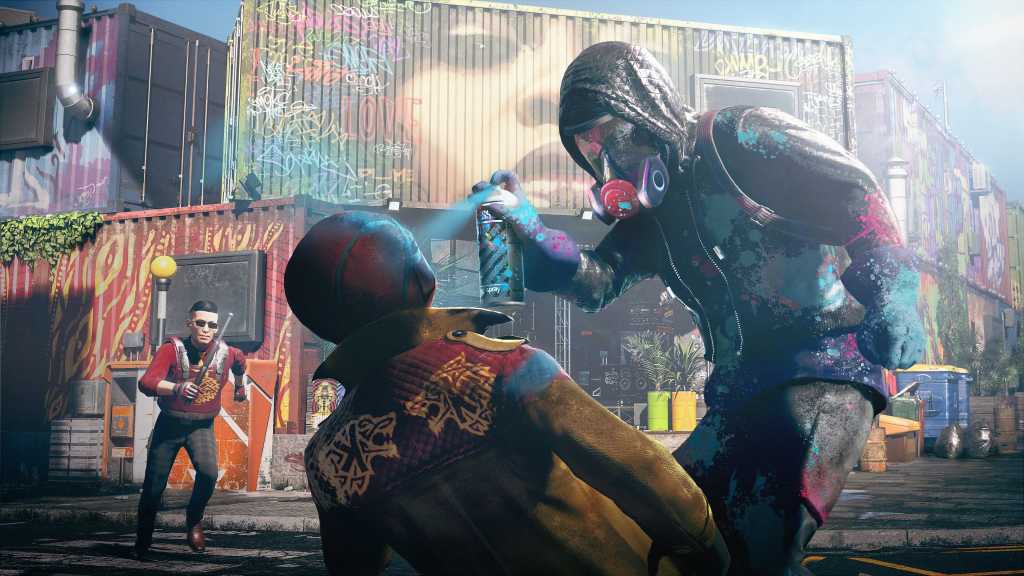 A construction worker, a private military contractor, and a graffiti artist walk into a bar. They drink a pint. They play darts. They look at their phones. And one by one, when nobody’s paying attention, they dip through the door marked “Staff.”

If there’s a punchline, it’s that all three are secretly resistance fighters. Turns out everyone in the UK has a latent talent for snapping necks and shooting pistols. All they need is a push in the right direction. A push I’m happy to provide, because at the rate I’m burning through operatives, DedSec is going to need a long list of recruits.

Holding out for a hero

Two demos in, it’s clear Watch Dogs Legion will live or die by its character system—and for good reason. It’s new and shiny and full of potential. But before I dig into my latest thoughts on the whole play-as-any-character-in-the-game system (which really needs a catchy name we can all make fun of like “Drivatar”) I want to take a minute and talk story.

Put simply: It’s ambitious. We only got the barest glimpse of it during the demo, but it’s definitely put to bed any questions about whether Watch Dogs Legion is “political” or not. It uh…it most assuredly is. I already knew Legion took place in a near-future London dominated by a militaristic police force, and that already felt like quite a political statement. The game doesn’t kick off with that status quo though.

Instead you play through the inflection point. The first mission involves DedSec discovering a Guy Fawkes-ian conspiracy. Someone’s rigged multiple London landmarks to explode. You manage to avert this catastrophe, deactivating the bombs at the last minute in true action hero fashion.

Or so it seems. In reality, whoever set up the attack played you, and played DedSec. The conspiracy is actually a false flag operation, a setup. The bombs go off and the attack is of course pinned on DedSec. Terrified, the people of London turn to the private security firm Albion to guarantee their safety. The UK falls headlong into fascism.

The false flag conceit is par for the course for Watch Dogs, which has always dabbled in conspiracies that seem way too well-coordinated and convenient for the real world. But the rest? Legion’s militarized London is reminiscent of the United States post September 11 or France after the Bataclan. In-game advertisements touch on anti-immigrant sentiment in the UK, and reflect the British exceptionalism that led to Brexit. And the police violence on display on every street corner could not possibly feel more timely had Ubisoft tried.

I can’t say whether Legion will do right by these topics. As I said, it seems ambitious. There’s a reason Ubisoft (and most developers) usually take the easy way out and claim games “aren’t political,” because trying and failing often draws more negative attention than pretending you simply don’t care.

That said, I’m way more interested in Legion’s story after this second demo. It feels like nobody played it, but Watch Dogs 2 had a surprising amount to say about Silicon Valley, tech companies, consumer privacy laws, and the like. Obviously it was still the product of a massive corporation and still designed to sell millions of copies, but Watch Dogs 2 was also one of Ubisoft’s most subversive games to-date. If Legion has the same opportunity to comment on current politics through the lens of this fake near-future London? I’d rather that than a sterile playground version of London.

My only qualm is that a grim storyline about terrorism and police violence seems counter to the inherent goofiness of playing as any character in Legion’s London. It seems at odds to craft this weighty story full of real-world issues and then center marketing efforts on the antics you can get up to in Legion as an 80-year-old assassin with a pistol in her purse, but that’s…kind of what’s happened up to now.

And I guess that brings us back to the play-as-anyone-in-the-world system. As I said, I do want to talk about it, because it’s clear Watch Dogs Legion’s success hinges on this single mechanic.

In our previous hands-on demo, I played as multiple 80-year-old women and wreaked havoc on London. Much as I enjoyed it, doing that twice wouldn’t make for a very interesting article. Thus this time around I spent time with a more diverse group of characters. There was Chris Wright, a construction worker. Nhu Tran was a graffiti mural artist. And late in the demo I recruited Willis Green, a member of Albion itself.

When you’re actually playing as a character, it’s almost seamless. The conversations you have during main story missions feel fairly natural (though I was surprised how little my DedSec recruits actually knew about technology). And I love the character-specific touches. Each character has appropriate weaponry, for instance, so my construction worker knocked people out with a wrench while the artist shot people with a paintball gun.

There’s also an element of social stealth. Borrowing from early Assassin’s Creed—or perhaps the uniformed antics of Hitman’s Agent 47—there’s an art to not drawing attention. My Albion insider, for instance, could walk through security checkpoints and into restricted areas without sounding the alarm, so long as he didn’t come too close to anyone. Given that Watch Dogs 2 was at its worst when the action devolved into a firefight, I’m hoping that happens far less in Legion.

Some aspects of this system feel very stilted though. The worst is recruitment. This typically begins with you approaching someone on the street and loudly proclaiming “Hey, I’m with DedSec” or something equally asinine. You know, declaring yourself to be a part of a terrorist organization in a surveillance state with cameras on every corner. A bold strategy, to be sure.

And aside from the unnatural way these conversations start, they all too often play out the same way. Sure, this stranger is willing to join DedSec (again, a reputed terrorist organization) so long as you do some menial task for them.

It’s in these moments you realize Legion is an incredibly complex stage production, and that the set is made from plywood and plastic. And yes, that’s every video game. Absolutely. The trick is minimizing the bits where the illusion breaks though, and unfortunately Legion introduces a lot of potential breaking points.

That’s exciting, to me at least. I love when games skirt the line between triumph and trainwreck. (See: Ancestors, Alpha Protocol.) I’m sure it’s terrifying for the developers, but those are the games that truly push the medium forward. And more often than not, they’re the ones people still talk about a decade later. Let’s just hope Legion trends towards triumph, yeah?