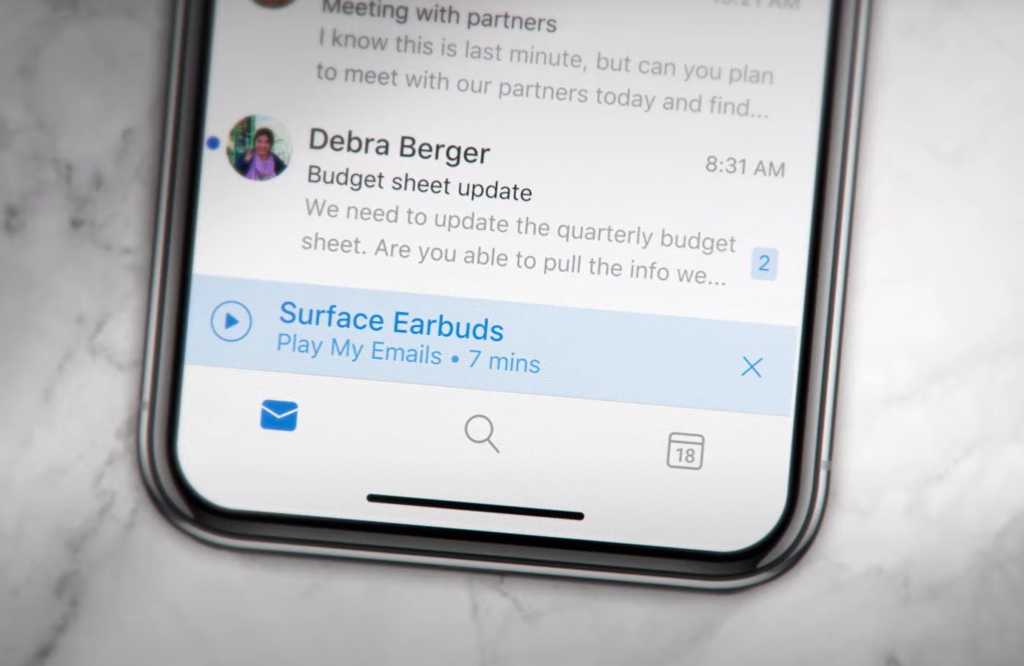 Microsoft has followed up its deluge of new Microsoft Teams features a week ago with a number of new additions to Microsoft Outlook. Announced Tuesday, they include a one-touch join feature for Zoom—yes, Zoom—plus Outlook’s “Play my Emails” feature for Android.

Unfortunately, Microsoft’s process for rolling out new features tends to follow an “announce, preview, ship” timeline, with some capabilities restricted to particular platforms. Some of the last major announced updates to Outlook occurred during Microsoft’s Ignite conference, a lifetime ago last November.

Microsoft’s updated “Play My Emails” fits nicely into this niche. Originally launched for iOS last year, Play My Emails offers a hands-free way to check email and transform them to to-do tasks using your voice. (Think of it as email, as voice mail.) According to Microsoft, it “intelligently reads out your email and shares changes to your day— ideal for commuting or multitasking—helping you get time back so you can focus on other things.” It’s now available for the Outlook app on Android, too.

Meeting Insights falls into the same category. Microsoft announced it as a feature for Outlook for the Web and iOS last November, but it’s newly available for Android today. Designed to do some of the heavy lifting for your homework, it collects all of the relevant email and associated documents in one place, in anticipation of what you’ll need during your upcoming meeting.

Finally, Microsoft previously announced new visibility into online meetings, where you can now see messages, meeting details, attendee’s responses, and add an online meeting from the Outlook inbox. This is specifically rolling out for Microsoft Outlook for the Web, and is launching today.

Outlook Mobile, Outlook for the Web add tweaks and features

Microsoft has also added several entirely new features to Outlook, some of which are being announced for the first time as well as debuting today. The vast majority of these new improvements are in the Outlook app for the Web, which typically receives new features first, as well as Outlook’s mobile apps, the first stop for mobile users.

A small though interesting addition is Outlook’s newfound ability to recognize that not all online meetings are held within Teams. Now if you receive a meeting invitation via Zoom or Cisco’s WebEx, you can add the meeting to your calendar, and use a “Join” button to enter the online meeting—even if it’s in the competing service. It launches for Outlook and Android today, and for iOS soon, Microsoft says.

Outlook for mobile is also soon adding a complementary improvement to suggested replies: a one-touch ability to share your calendar. You’ve been able to share calendars previously, as well as send your availability via Outlook for the Web. This feature will be coming soon to the Outlook mobile apps, as part of Outlook’s new, AI-driven “suggested replies” feature that otherwise mimics a feature Google pioneered.

Outlook for the Web goes even further: The work calendar now “knows” your personal calendar (if you sync the two). In this case, personal time will be blocked out on your shared work calendar, though any personal meetings and notes will be shielded from public view. While this feature was pre-announced in March, it’s now rolling out to just commercial customers who use the Outlook Web app.

You’ve been able to “snooze” email in Outlook for the web for some time now, but now you can schedule a reply for when it’s more convenient. Microsoft says you’ll be able to schedule the email to be sent at a future date and time of your choosing, but also tailor it to the convenience of the recipient—when they’ve returned from vacation, for example. This is rolling out for Outlook on the Web, today.

Finally, Outlook can take the purpose of most email—can you do something for me?—and transform it into an actionable task in the Outlook app for iOS. We’ve seen bits and pieces of this crop up within Cortana and in other apps over the years—and this feature is already available for Outlook on the Web. Now, however, you can turn the email into a “task,” track it with Outlook or Microsoft To Do, and manage it in both apps. It’s a new feature specifically for Outlook for iOS, and is currently rolling out. You can also now highlight part of an email message and assign it to a task—but while this particular feature is also rolling out today, it’s just for Outlook on the Web.

In a blog post, Microsoft also reminded users that they can use Outlook’s smaller, hidden features to improve their quality of life: automatically schedule meetings for 50 minutes, rather than a full hour, for example, and use the existing Cortana-powered Briefing email to see an overview of their day.