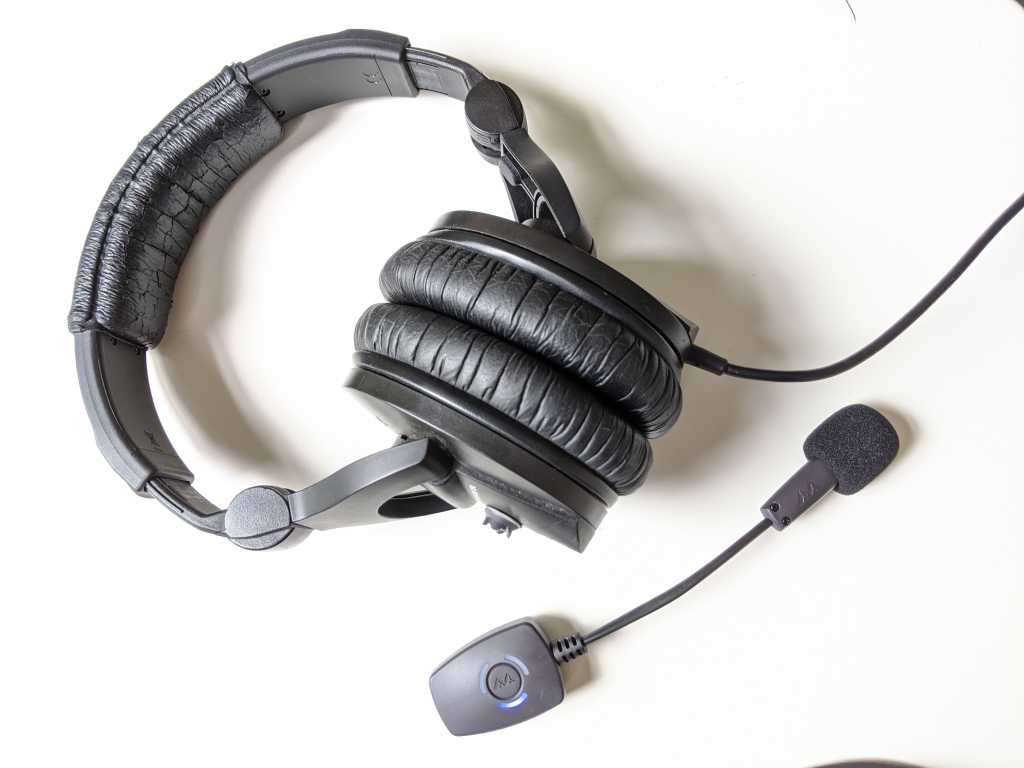 It’s expensive and a bit unwieldy, but for those who absolutely need to wear their favorite pair of headphones while gaming, the ModMic Wireless makes it fairly painless to add a “built-in” microphone.

Antlion’s ModMic line always appealed to me in theory. Forget buying a gaming headset of questionable repute. Acquire a high-end pair of headphones instead—hell, maybe you already have that—and then simply affix a microphone to the side. My inner audiophile rejoiced at the idea.

But I found the then-current ModMic 5 a bit awkward when I reviewed it in 2018. Picture it: You’re already using wired headphones, and then you need to run a second, separate wire from the ModMic itself to your PC. It was kludgy, even with the cable sheaths Antlion included to bind the two wires together—a prototype more than a product.

Putting in the work

ModMic installation is still as nerve-wracking as ever. Remember, the ModMics are designed to mount on any pair of headphones. That means adhesive, in the form of 3M tape. You peel off the backing, eyeball where you want the microphone to rest, and then affix it.

It feels permanent. It’s scary. Like last time, I decided to use my Sennheiser HD 280s, which aren’t even that expensive. They’re $100 studio headphones I’ve had for nearly a decade now. Even so, it’s unnerving to make such a drastic—and admittedly somewhat ugly—modification. I can’t even imagine doing this with some $1,200 ZMFs or what have you.

Actually, I can imagine it, and I don’t recommend it.

Assuming you have some headphones that are nice-but-not-too-nice though, the good news is the ModMic is more “semi-permanent.” What you’re actually affixing to your headphones is a small magnetic disc. It’s still a bit of an eyesore, but the rest of the ModMic, the actual bulk of the device including the microphone and control unit, detaches.

That’s essential, really. If you’re using a ModMic, chances are it’s because you have a pair of headphones you love. You love them so much, you can’t bear the thought of using a gaming headset, even for the added convenience. It follows that you’d want to keep using those headphones outside the house, and being able to remove (most of) the ModMic makes that possible.

And the ModMic Wireless is infinitely easier to remove than its predecessor. Once I’d attached the ModMic 5, I basically left it in place. Removing it entailed undoing all the cable sheaths, untangling the two cables inside, and then detaching the actual ModMic itself. It wasn’t worth the effort. But the ModMic Wireless? It just pops on and off. Easy.

My only complaint about installation is that I felt “forced” to do so on the right earcup. Why? Because doing so meant the MicroUSB charging port was properly oriented facing down. You could mount the ModMic Wireless on the left, and I wanted to do so because that’s the standard for most (if not all) gaming headsets, but it leaves that port pointing into the sky, which is…weird.

Anyway, once it’s mounted it’s fairly easy to get the ModMic Wireless paired up. Plug the USB dongle into your PC, and then it’s as easy as holding down the button on the dongle and on the ModMic itself to set them searching.

Still, there are some drawbacks. Going wireless definitely improves the ModMic experience overall, but it does mean you’re battery-reliant. Antlion claims you’ll get 12 hours of battery from the ModMic Wireless, which should be enough for even a long day of back-to-back Zoom calls and gaming. It’s one more device you need to remember to charge though, or else you’re back to two cables dangling from your headphones.

I also wish the ModMic Wireless was smarter about powering down. It’ll do so automatically if the receiver loses power (i.e. you put your computer to sleep) but otherwise you need to remember to manually turn it off when you’re done talking.

The ModMic Wireless also includes status LEDs on both the microphone unit and the USB receiver. Blue means the ModMic is connected, red means it’s muted, and yellow means it’s charging. Problem is, the placement of these LEDs is awkward. The three on the ModMic itself are arrayed on the outside, meaning when you have the headset on you can’t see them. This is especially problematic in the case of the red “Mute” indicator.

Antlion’s solution is to direct your gaze at the USB receiver. That works fine on most laptops, but on a desktop? A long-term peripheral like this, I want to put the receiver on the back of my tower, except then you can’t see the lights. Antlion includes a USB extension cable, so you can either plop that on your desk somewhere in view or clear space on your front I/O. Neither’s a perfect solution, in my opinion—but hey, at least it’s cleaner than the ModMic 5’s in-line mute toggle.

The last knock against the ModMic Wireless is that the audio is less impressive than with the ModMic 5. There’s a price to pay for going wireless, even when you’re going made-for-audio-snobs wireless.

You still get two microphones here, a cardioid pickup for noisy environments and an omnidirectional microphone for higher-quality recordings. When you A/B test with the ModMic 5 though, the ModMic Wireless dishes up a thinner and more nasally sound than its wired sibling on both settings. This is not a microphone I’d want to record music with or even a serious podcast.

That’s only disappointing coming from the ModMic 5 though. If you’re coming from a standard gaming headset, especially a wireless gaming headset? The ModMic Wireless definitely sounds warmer and more flattering than (for instance) the HyperX Cloud Flight S or Astro A50.

I guess the question is whether “better than a gaming headset” is enough to justify the ModMic Wireless’s $120 price. If you’re in love with a specific pair of high-end headphones, the answer is potentially yes—but the ModMic Wireless won’t pull double-duty as a podcast microphone or anything like the (significantly cheaper) ModMic 5.

Price is the only reason to give the ModMic 5 any consideration though—and even then, I’d still opt for the Wireless. Sure, the ModMic Wireless still isn’t nearly as convenient nor as elegant as a headset with a built-in microphone. It’s a “hack,” a workaround designed for a passionate niche of audiophiles. But the ModMic Wireless does what it claims, and does it with a hell of a lot less fuss than the original wired ModMic. This is the closest Antlion’s ever come to its goal.

I still think a proper gaming headset is probably a better investment. As I said, the ModMic Wireless is $120 on its own, more expensive than the HyperX Cloud Alpha and almost as much as Logitech’s G Pro X and G533—and that’s before you factor in the cost of headphones. (See our roundup of PC gaming headsets for our top recommendations at all price levels.) But if you’re determined to go down the audiophile rabbit hole, the ModMic Wireless is your best option by far.