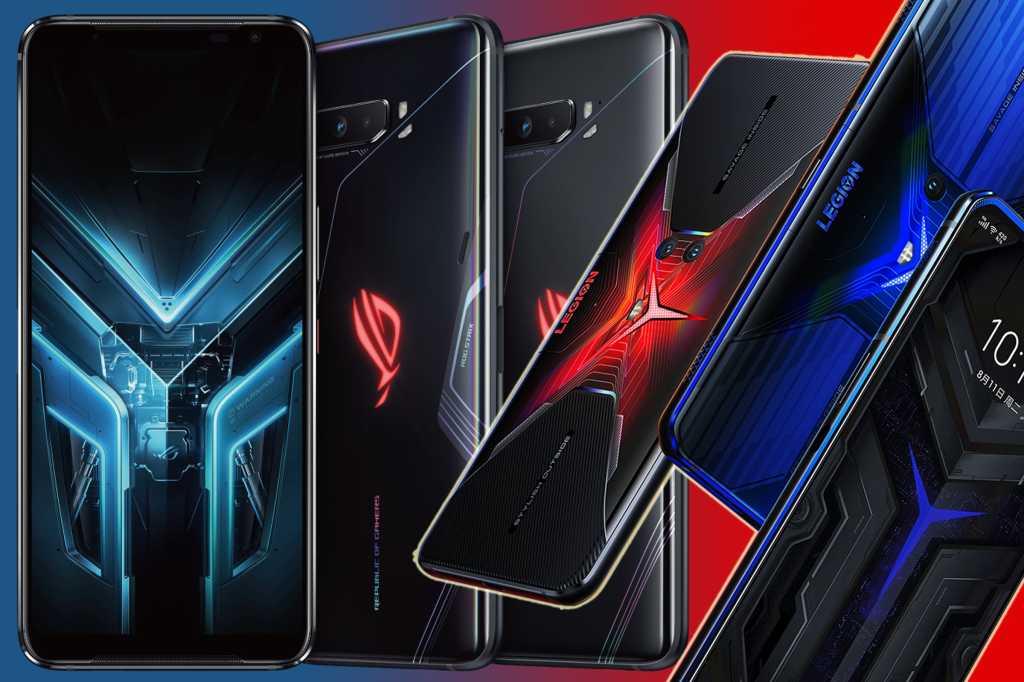 While the gaming world anxiously awaits the next piece of information about the next-generation of Playstation and Xbox consoles arriving later this year, Asus and Lenovo are targeting a different kind of gamer who may or may not actually exist.

The Asus ROG Phone 3 and Lenovo Legion Phone Duel are being marketed as gaming phones, and they certainly have the goods to back it up. Both phones are powered by the Snapdragon 865 Plus processor and pack up to 16GB of LPDDR5 RAM with 144Hz displays, have side- and bottom-mounted USB-C ports, sport top-of-the-line cameras, and weigh more than half a pound. And of course, they’re loaded with over-the-top “console-inspired” design choices that proudly show off their thickness and aggressive bezels and contours. And you get plenty of the appropriate gaming bells and whistles:

And I thought the Galaxy S20 Ultra was overkill. Along with the bleeding-edge specs, you’ll also gigantic batteries (5,000mAh in the Lenovo Legion and 6,000 in ROG Phone 3) as well as a tremendous array of customization options both for gameplay and the add-on accessories. And like a true gaming device, they both come r=equipped with RGB lighting.

But while the ROG 3 and Legion have obvious gamer aesthetic appeal and will run circles around nearly every other phone they’re pitted against, something about these two phones feel like the end of an era of niche luxury. And I for one won’t be sad to see it go.

I review, read about, and react to a lot of Android phones, but lately, it seems like the quest for greatness has left the consumer behind. Premium Android phones no longer appeal to anyone but the most enthusiastic fans, and the ROG 3 and Lenovo Legion are the ultimate testaments to that philosophy.

I’m not ever sure hardcore Android gamers exist outside of a few popular YouTube channels, but if they do, they’re an extremely small group, even smaller than the one who needs the upcoming Galaxy Note 20 Ultra. And even if they did exist in large numbers, why do they need such mind-blowing speed in a phone?

Asus points out that the mobile gaming market is poised to account for some $75 billion of global games revenue, of which smartphones account for $65 billion. So logically, this means “more and more people are playing games on smartphones, that games are becoming better and better, the need and wish for gaming smartphone devices will also grow accordingly.”

But if you look at the top games in the Play Store, you need to go pretty far down to find a game that needs the kind of power these phones provide. If the Xbox can run brand-new AAA titles on a years-old processor, then why does the Asus ROG Phone 3—which will be priced “around the same ballpark” as the $899 ROG Phone 2 when it hits U.S. shelves in September, according to an Asus representative—need annual updates? Are mobile games so much more demanding than console ones that dual-cooling and clip-on fans are necessary enhancements? Most games can’t even take advantage of the 144Hz screen, let alone the 865 Plus speeds.

Innovation in the void

I’ll admit there is some very cool tech inside these phones. The extra USB-C port could come in handy when charging and listening to music, while the side-mounted pop-up cam would be great for video calls. The fast-charging dual batteries in the Legion allow for some clever engineering that forces the logic board to the center of the phone and away from your hands, while the Sentons’ SDS GamingBar tech seen in the phones’ touch triggers could revolutionize multitasking and navigation on a Pixel or Galaxy phone.

But cramming them all into a gaming phone with a high price tag and niche appeal is a waste. The innovations here may one day trickle into more mainstream Asus and Lenovo phones, but for the most part they’re going to remain locked up in the nichest of niche products. Most people aren’t looking for the kind of power on display here and even the target audience doesn’t really need it.

Quite frankly, I’d rather Asus and Lenovo showed some restraint. Even with ridiculous specs, phones costing a thousand bucks and up that aren’t iPhones or possibly a Galaxy are all but doomed for the scrap heap of history. No one is selling high-priced right now, and even Apple has turned to cheaper models to buoy sales. In a world where phone makers are making practical decisions about the features and pricing of premium phones, gaming phones are something of a throwback to an arms race that just seems silly now.

Even if millions of people weren’t still out of work, the Asus ROG Phone 3 and Lenovo Legion just seem hopelessly out of touch with the current landscape. Like the Mercedes AMG G65 or Bugatti Divo, they may appeal to our ego, but even if you can afford and decide to buy one, they’re just going to seem exorbitant, extravagant, and unnecessary. Unless, of course, you simply can’t live without RGB lighting on your Android phone.