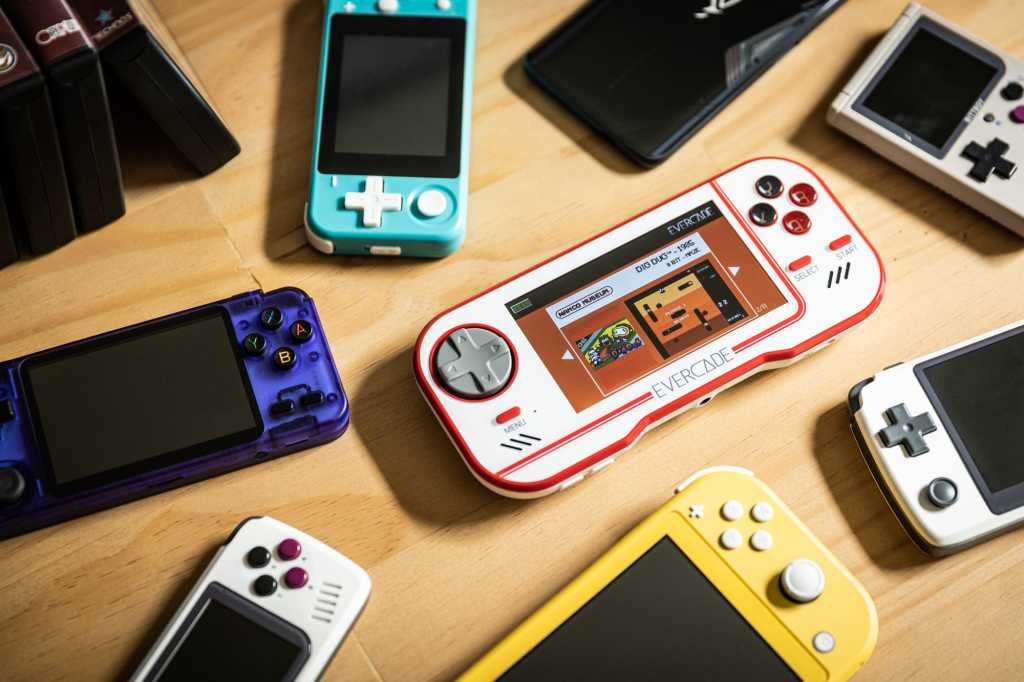 These days, you’ve got endless ways to play retro games using emulation on PCs, Raspberry Pis, or even Android phones—most with varying degrees of performance or legality. But the new Evercade handheld console is tackling retro gaming emulation in a highly focused and legally legitimate way. Unlike the recent flood of Chinese-based handheld emulators like the PocketGo V2, Evercade (the company) works with major publishers to release physical cartridges featuring tailored emulation so that each game plays the way you remember.

If you’re a retro game enthusiast looking to find easy, accurate, and legal ways to play titles from a variety of gaming eras—outside of buying the original hardware, of course—then the Evercade is worth a hard, long look.

What is the Evercade?

The Evercade is a handheld console that emulates classic games. It’s roughly the size of a Nintendo Switch Lite, with a 2,000mAh battery and a 4.3-inch LCD screen (the same size as a Sony PSP) sporting a 16×9 aspect ratio. Evercade’s quad-core 1.2Ghz ARM processor packs enough oomph to run 8- and 16-bit games, with plenty of leftover overhead to power future releases. Same goes for the 16×9 screen—all of the games I tested were presented in the original 4×3 aspect ratio, with wider aspect ratio systems coming soon.

For inputs, you’ll find a D-Pad, four face buttons, two shoulder buttons, two volume buttons, Start/Select, and Menu, which is used to access various settings like save states. Ports include a Micro-USB port for charging, a 3.5mm headphone jack, a Mini-HDMI port for connecting to a TV, and a cartridge slot.

You heard that right. The Evercade doesn’t store ROMs on a Micro-SD card like most handheld emulation devices. Instead, the company is producing physical cartridges like the Gameboys of old. Going cartridge-based serves a couple purposes. First off, it hearkens back to the days of classic physical media and it really tugs at my nostalgic heartstrings. Getting a cartridge in a plastic case reminiscent of Sega Master System games, complete with an included manual, should definitely appeal to retro game collectors.

More importantly, Evercade told me the main reason for using cartidges is so they can deliver new content from new systems onto the console without needing to run a firmware update to the console itself. Firmware or bug fixes can be deployed if needed through plugging the Evercade into a PC via the micro-USB port but, they want the experience to be as plug and play as possible.

Cart-based emulation also allows for an emulator to be tweaked to work better for a specific game/platform, rather than the one-size-fits-all approach found with other emulators. While it’s fun digging into RetroArch to tweak emulation settings for each retro game on your Raspberry Pi, I trust the minds at Evercade to aim for appropriate settings per game—which has proven true in my time with the device (more on that later).

Each cart is publisher-specific and retails for $20, featuring between 6 to 20 games depending on the lineup. Evercade says it will be releasing new cartridges at a fair pace, and you can see the up-to-date list of available games on the Evercade website, but the company sent over the first 10 releases for this review:

Future releases include Atari Lynx collections 1 and 2, The Oliver Twins Collection, and a Xeno Crisis & Tanglewood dual game cartridge, with more planned. Hopefully Evercade can court even larger publishers who have extensive retro gaming catalogs like Konami and Capcom (I’ll buy every version of Castlevania III: Dracula’s Curse under the sun) because there are glaring omissions. Unfortunately some publishers like Nintendo would most likely never agree to have their retro games appear on the Evercade. Going with fully licensed cartridges definitely limits the Evercade’s potential library compared to retro handhelds that expect you to stock your own (legally grey) digital ROMs.

How does the Evercade play?

The Evercade console’s large size surprised me, especially compared to the other handheld devices I’ve reviewed lately. But after a bit of time with it in my hands I realized just how much more comfortable it is—allowing me to game for longer sessions. Yes, the size makes it harder to throw in a pocket and go, but it’s still super sleek and portable.

From hitting the power switch to getting in game, things couldn’t be more easy. After the splash screen you’re greeted with a slideshow of titles available on your chosen cartridge; simply press a button to launch the game you want to play. As I said before, the Evercade’s ARM processor has plenty of power to run games from the 8- and 16-bit era. I never encountered a single hitch in emulation, menu navigation, or loading save states.

You have to fuss around with emulation settings in some games on other retro handhelds. Not the Evercade. Having the games take center stage without worrying about performance was an absolute joy. Admittedly, I don’t have extensive knowledge of most of the games in the catalog, but my gameplay experiences felt smooth and natural. Given the care that was put into each experience, and the work done directly with the publishers and developers, I feel confident that the games were running as intended. But don’t take my word for it! Check out this Digital Foundry analysis from someone who understands the technical nuances of retro emulation on a much deeper level than I do:

When it comes to controls, I’m not a huge fan of the circular d-pad—not because of its shortcomings, but because of personal preference. It offers plenty of travel and circular movement but not enough clear delineation between cardinal directions for my taste. I do love the feel of the slightly convex face buttons, however. They have a satisfying pressure and “click” upon press. Evercade’s large buttons are definitely stiffer than most other emulation-based handhelds, but in a sturdy way that feels good. I wish there was more separation between them, though—I often found myself accidentally hit two buttons at the same time.

My index fingers rested easily along the length of the concave shoulder buttons. They’re a bit too sensative though, making it unfortunately easy to trigger an unintentional press. I also wish there was a bit more travel, but the click itself feels very satisfying.

Sliding the cartridge in and out of the system is quite a pain on our review unit, as the slot that receives them is a bit too tight. Other reviews mentioned it as well. Evercade assures me that this will be corrected during final production. I’m hoping that’s the case because I missed out on the joy of slotting in a new cart into my handheld.

The Evercade includes a Mini-HDMI port on the top of the device to plug into a TV or monitor, and doing so turns off the integrated display. It’s recommended to plug the HDMI cable into the unit before powering on the handheld, because once it detects something plugged into that port, the software restarts in order to switch outputs—you can’t seamlessly move back and forth like you can on the Nintendo Switch. Also worth mentioning: the first unit I was sent for review had a finicky port that caused the device to reboot at the slightest bump to the cable. The second unit Evercade sent me didn’t exhibit that problem.

All in all the Evercade’s a solidly built device with plenty of internal horsepower to play more demanding games in the future. The classic design and aesthetics give it a timeless feel, and the build quality feels like it should hold up for many years to come. No, it’s not perfect, but for the most part I love playing on it.

Who is the Evercade for?

Playing on the Evercade is a substantially different experience than using other handheld emulation devices. I think it will appeal to a smaller audience—but one that is more deeply invested in the retro gaming experience. Even though I have an extensive ROM library that I load onto every other retro device I have, I typically stick to playing the same handful of games I know and love. Sure, that’s partly because I’m reviewing these devices, but it’s also because in the face of almost endless options it’s easier to sink back into a familiar game than to try something new.

But with the Evercade, I felt like I was sitting down with a hand-picked list of games that were professionally recreated for me to experience—many for the first time. I found myself much more engaged in exploring the games on offer because they’re served up in such a special way. From sliding the cartridges out of their plastic cases, to reading the small blurbs for each game inside the printed manuals, to taking my time exploring each of the high-quality games in these curated cartridges, using the Evercade felt like diving into a small-scale Criterion Collection of retro games.

Beyond that, it feels good knowing that each of these collections were made with the participation of the actual game publishers—meaning there is no legal grey area to worry about. As a content creator myself, I’m thrilled to support the people involved in making games, and it’s not often you get a chance to do that with retro titles unless there are remasters involved. It also keeps you from having to scout around sketchy ROM sites to download the games you want to play (though you should be dumping your own ROMs).

To wrap all those thoughts together, retro game enthusiasts who prefer high-quality emulation and want help support the companies involved will probably get the most out of the Evercade.

I’ve reviewed several retro game emulation devices over the years—but I’ve never had an experience like the one Evercade delivers.

From the physical design to the high-quality, fully legal emulation, the Evercade feels like a hand-crafted experience that is more than the sum of it’s parts. Its strong point is also its weak point, though; the Evercade’s future hinges on more cartidges being released so retro enthusiasts can expand their libraries. That said, while there’s no guarantee on how many cartridges will wind up landing down the line, there’s already a pretty deep catalog to dive into right now.