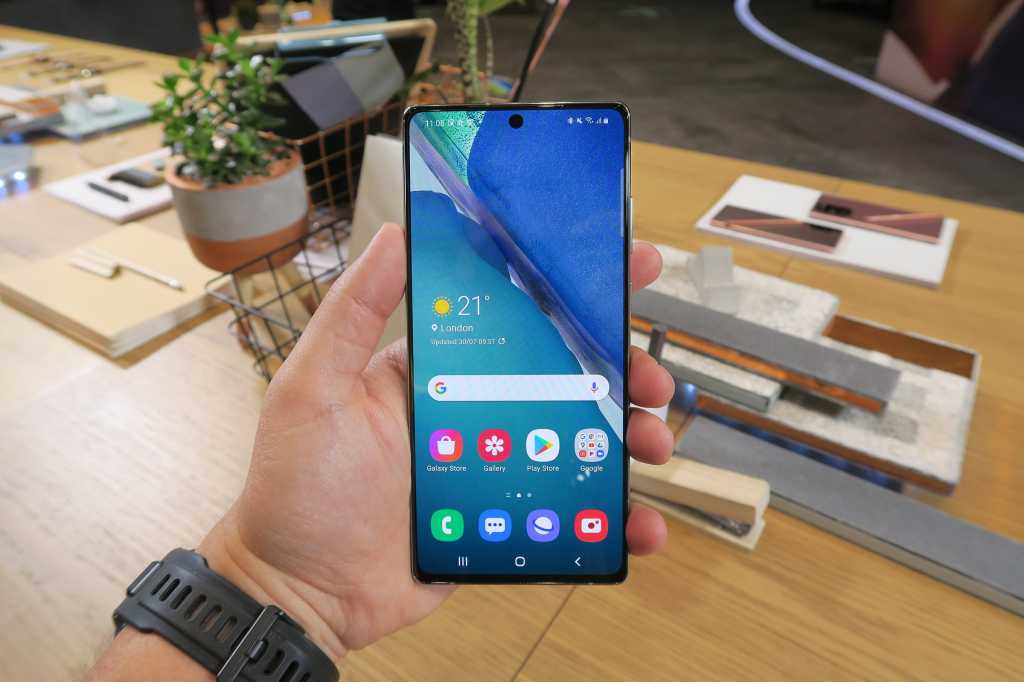 You might think the new $1,000 Galaxy Note 20 and $1,000 Galaxy S20 are two peas in the same pod as “affordable” counterparts to their high-priced Ultra siblings. They’re not.

While the Galaxy S20 is basically a smaller version of the S20 Ultra, with the same chip, RAM, and screen tech as its pricier sibling, the Galaxy Note 20 shares very little with the Note 20 Ultra. Samsung has set the cheaper Galaxy Note 20 apart from both the Note 20 Ultra and the Galaxy S20 Ultra with a number of changes, many of which might make buyers think twice about buying one.. Here’s why your thousand bucks might be better spent on the slightly older Galaxy S20—or not.

For the first time since Samsung has been using Snapdragon processors in the U.S., the Galaxy Note has a faster processor than the Galaxy S. Samsung has opted to outfit the Galaxy Note 20 with the Snapdragon 865+ processor, which brings a 10-percent boost in speed and graphics. Whether that translates into a performance boost that you can feel is another story, but anyone who buys a Note 20 will have the best chip Samsung ever shipped.

…But the Galaxy Note 20 has less RAM

Like the Galaxy S20, the Galaxy Note 20 Ultra is loaded with 12GB of speedy LPDDR5 RAM, but that’s not the case for the Galaxy Note 20. The “cheaper” Note 20 only has 8GB of RAM, so you won’t be able to keep as many apps open at one time or lock any of them to the RAM for instant loading. Granted, 8GB is plenty for a phone—and the Ultra still has 12GB of RAM—but if you’re paying the same price, you’d expect the same RAM.

The Galaxy Note 20 has a new speedy S Pen stylus…

The main reason for the existence of the Note line is its onboard S Pen stylus, and Samsung has made it even better on the Galaxy Note 20. Latency has been reduced all the way down to 9ms, so writing will feel as natural as an actual pen, and it has a whole assortment of new tricks, including air gestures, PDF annotation in Notes, and enhanced handwriting recognition.

…But you can’t expand the Galaxy Note 20’s storage

The Galaxy Note line is generally synonymous with power users and productivity, but the Note 20 is missing several high-end features, including an expandable memory slot. While all models of the Galaxy S20 can expand their storage up to a terabyte with a microSD card, you’re stuck with 128GB of fixed storage with the Note 20.

DeX has been one of the more underrated features of Samsung’s premium Galaxy phones, letting you turn your phone into a mini PC with mouse and keyboard support, and bonafide desktop experience. What started as a full dock turned into a charging pad, then a cable, and now you don’t need any extra equipment at all. If you have a TV or monitor with Miracast support you can beam your Galaxy Note 20 to it with just a tap.

The Galaxy S20 was Samsung’s first 120Hz phone, and we naturally assumed it would also come to the Galaxy Note 20. We were wrong. While the higher-priced Note 20 Ultra has a fast 120Hz screen, the cheaper Note 20 has the old 60Hz one. And while it’s a good deal larger than the S20 (6.7 inches vs 6.2 inches), it also has a lower resolution.

The Galaxy Note 20 has a big battery…

The Galaxy Note 20 has a 6.7-inch display and 5G onboard, so it’s going to need a big battery to make it through the day. Samsung has fitted the Note 20 with a 4,300mAh battery, about 10 percent bigger than the 4,000mAh battery inside the Galaxy S20. That might not seem like much, but with fewer pixels and a 60Hz screen, the Galaxy Note 20 could be one of Samsung’s longest-lasting flagships in years.

…But the exact same camera as the Galaxy S20

Not that there’s anything wrong with that. The Galaxy S20 has one of the best cameras this side of the iPhone 11 Pro, so the Galaxy Note 20 will take fantastic photos with very little effort. Still, it would have been nice to get a new feature or two.