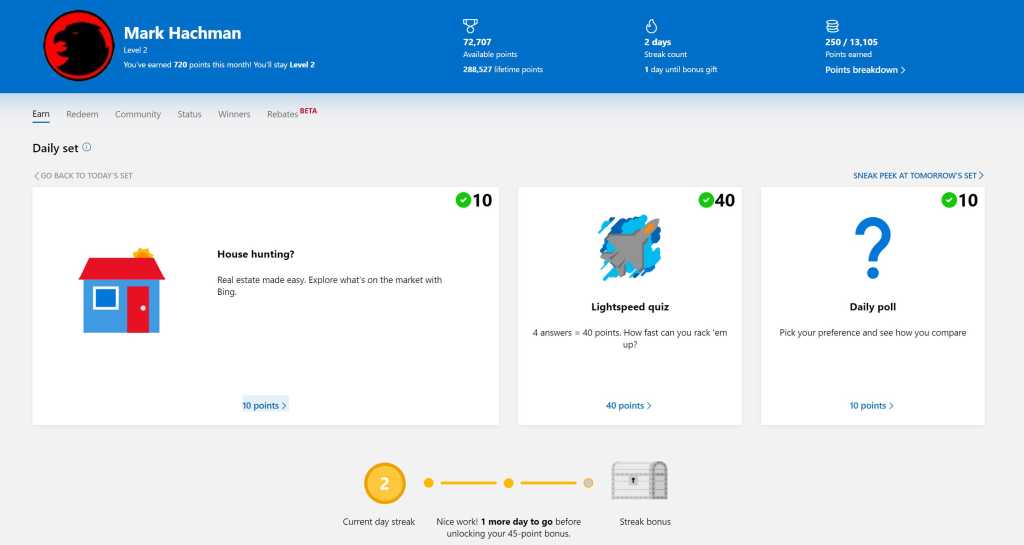 While Microsoft’s Game Pass for PC is scheduled to more than double in price as it  comes out of beta this week, don’t despair! Microsoft Rewards is your ticket to getting the best deal in gaming, for free.

Microsoft Rewards is basically free money, and not enough of you know how to use it. We’re going to show you how to use Microsoft Rewards to help buy all the things you want—an Xbox Series X! Starbucks! Amazon gift cards!—beginning with the awesome Game Pass for PC subscription.

We’ll use the awesome Xbox Game Pass for PC, which costs $4.99 per month, as our target. Game Pass for PC is part of Xbox Game Pass Ultimate’s “Netflix-for-games” subscription, which we’ve already shown can be purchased for peanuts if you know the trick. But why pay at all? Microsoft Rewards is the answer to that.

What can you earn with Microsoft Rewards?

As we go through our tutorial, keep your eye on the prize: a one-month Game Pass for PC subscription is 7,000 points. You can pay 5,000 points for a $5 Microsoft gift card, though that can only be applied to games, apps, movies/TV shows, or devices like a Surface or Xbox—not Game Pass.

But the Microsoft Rewards redemption page offers all sorts of possibilities: Microsoft gift cards and Game Pass subscriptions, including Game Pass Ultimate; gift cards to retailers like Amazon, Target, REI, Sephora, and Walmart; food offers at Starbucks, Burger King, Dominos, UberEats, DoorDash and GrubHub. You can even donate your points (and their cash value) to the World Wildlife Foundation, Girls Who Code, the American Red Cross, The Trevor Project, and more. Microsoft will often “pay” you points to double your donation.

Microsoft has an odd tiering system, which offers discounts after progressing from Level 1 (at 500 points or less) to Level 2. That means you’ll spend even less to “buy” what you want with Rewards points as you earn more throughout the month.

(“But that means I have to use Bing,” some of you may whine. I’m a habitual Bing user; I switched to Bing in 2017, back to Chrome when Bing fell down, hard; and back to Bing over the past year or so after Microsoft fixed Bing’s issues. You could still use Google in a pinch.)

In effect, doing nothing more than using Edge and Bing to search on your PC (30 days x 150 points, pus 30 days x 20 points = 5,100 points) will earn you the equivalent of $5 per month without any extra effort on your part.

If you’d like, you can also gamify the process. Every day Microsoft offers you three choices: a “daily set” of a quiz, a poll, and a fact. Clicking each of them will generally earn you an additional 50 points a day. Microsoft will also add bonus points for three successive days that you perform daily sets, such as 45 points per three-day streak. If you miss a day, your daily-set streak resets. But don’t feel too bad, as some of the quizzes will automatically archive down lower in the dashboard.

If you keep up with your “daily sets,” the 1,500 points you’ll receive plus the 5,100 points from searching gets you close to our target of 7,000 points. Add that to the bonuses should put you at, or very near, that 7,000 figure. Victory! But why stop there?

If there’s one area in Microsoft Rewards has neglected, it’s earning points for playing PC games—something we’ll talk about in the next section. But you can also earn Rewards points for buying them, using actual cash. In August 2020, for example, Microsoft was offering 5,000 points alone for spending $50 on game purchases. And if you rent or bought any three movies in August, you could earn another 2,500. It’s something to keep in mind if you’re considering renting a movie online.

While there’s no Microsoft Rewards app for the PC or Android, there is one for the Xbox. Go to the Microsoft Store app to download it. Once there, you’ll need to make sure you’re logged in after you open it up.

Not surprisingly, Microsoft makes playing games itself a game. Every week, you’ll have the opportunity to do the Rewards Weekly Set, with three tasks: you might simply have to log in on three successive days, or watch a trailer for an upcoming game, or accumulate three Xbox Achievements in any game. Keep doing this, and you’ll earn points, plus big 1,000-point and even 2.500-point bonuses once you hit milestones like the ten-week mark. Note that you can still earn Achievements from playing PC games, but they have to be downloaded via the Windows 10 Xbox app, and the developer has to have Achievements enabled.

Way down at the bottom of the Microsoft Rewards app, there’s something called “Other ways to earn.” While that section serves as a summary of your PC searches on your PC and mobile, it also leads to another section called “Game Pass Quests,” where even more Rewards points lurk.

In general, Game Pass Quests are chump change. You’ll receive a handful of points for playing a game in Game Pass (for PC or Xbox) and earning achievements in Game Pass games. Quests can be achieved daily (like logging into the Game Pass app for Android) or weekly, and constantly change.  They can be as simple as 50 points just for logging into an app, or require more complex accomplishments like surviving for 50 days in Cities: Skylines. However, there’s generally a fairly large reward (1,000 points) for completing a succession of weekly and daily quests.

There’s one catch: Unlike every other Rewards task, you must redeem Game Pass Quests manually. Other Microsoft Rewards points that you earn are automatically added to your total. You don’t need to log on to your Xbox to do this, however, as the Xbox Game Pass app for Android allows you to redeem Quest points, too.

Other ways to win Rewards points

Until recently, Microsoft would send you a weekly email with the opportunity to win Rewards points by clicking through links, as well as the occasional “hidden link” which awarded even more. That seems to have gone away in favor of the expanded Xbox opportunities.

There are occasional crumbs hidden away, too. Microsoft Rewards extension for Chrome promises some additional points, and the Bing app for Android used to (that implementation has been broken on my phone for months).

How many points can you earn from Microsoft Rewards per month?

Microsoft Rewards is always in flux, so the value of individual tasks and the total amount of Rewards points available is constantly changing. Sharp-eyed Rewards hawks keep an eye out for discounts on gift cards, stretching your Rewards even further. Special promotions constantly pop up.

With that said, one member of Reddit calculated that you can earn up to 18,000 points per month, or about $22.50. At that point, the amount of effort required to chase every Rewards point wouldn’t seem to be worth your time.

Smart Rewards users, then, balance their time against their potential rewards. Sure, you can probably afford an extra $5 per month for Microsoft’s Game Pass for PC. But there’s something oddly rewarding about just “getting it for free”—and Microsoft Rewards scratches that itch.

This story was originally published on Aug. 6, and updated to reflect the change in Microsoft Game Pass for PC’s status.