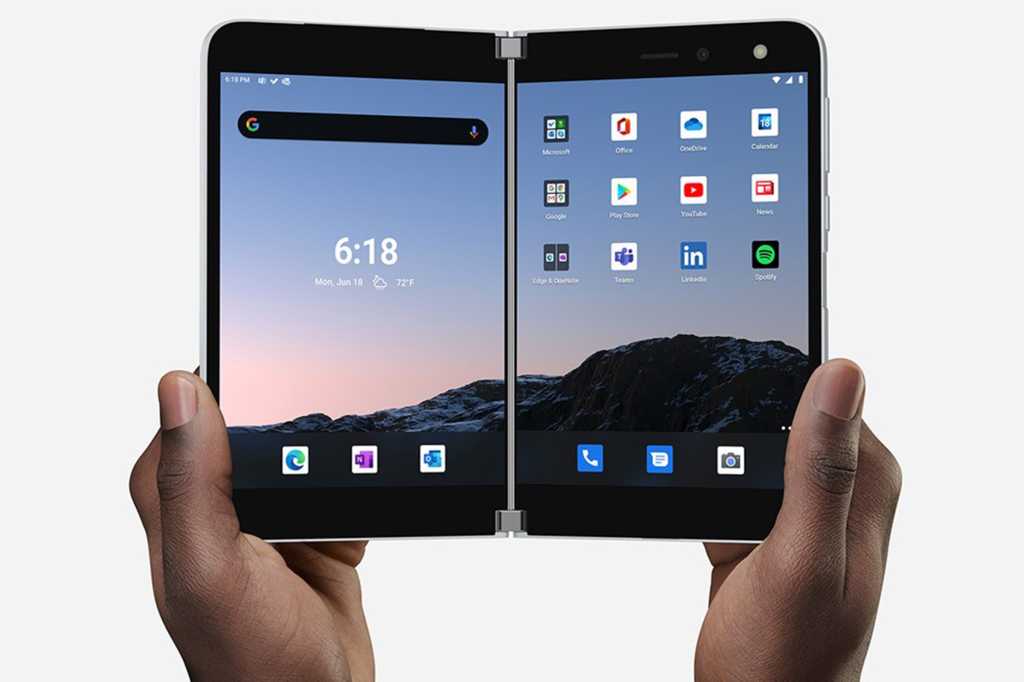 The Microsoft Surface Duo, the dual-screen smartphone unveiled last October, brought good news and bad news for eager fans in a blog post on Wednesday. The good news is it will ship September 10. The bad news is it’s very expensive.

But with Android 10 onboard rather than Windows—even a heavily skinned and specified version—the Surface Duo’s competition will be the latest luxury Android phones. On that note, the Duo costs more than the just-released $1,299 Galaxy Note 20 Ultra, even though it has less-powerful specs. The Surface Slim Pen, which seems central to the experience, costs extra and can’t be stored on the device. The Duo also doesn’t support 5G, Wi-Fi 6, nor will it have an NFC chip for contactless payments. To start, the Duo will be limited to United States customers and will work on all three major carriers.

Its design is certainly interesting, though. Rather than a true folding display, the Surface Duo opens to a pair of 1350×1800 AMOLED displays with a 4:3 aspect ratio. Together, they total 8.1 inches of screen space and work more like a multi-monitor desktop setup than a single screen. For example, when you tap a link on one side, it’ll open on the other screen. It supports a variety of unique dual-screen features, including drag-and-drop and split-screen multitasking.

Structurally, the Surface Duo lacks an outer screen like the Galaxy Z, so you’ll need to open it up to use it. There’s a 360-degree hinge for folding it back like a Chromebook

While its concept might have seemed novel last year, the Surface Duo joins a growing lineup of folding phones, including the Galaxy Z Fold 2, Galaxy Z Flip, and Motorola Razr. Additionally, the LG Velvet has a Dual Screen accessory that turns it into a Surface Duo-like device with a second screen when opened.

However, Microsoft isn’t trying to compete with the folding Android phones of the world. Calling it “the next wave of mobile productivity,” Microsoft is touting the Surface Duo’s ability to switch between Android apps and Microsoft 365, as well as its strong security—the company says it wrote and reviewed “every line of firmware code in house”—as integral to the experience. In an enterprise-oriented blog post, Microsoft also pointed out the Duo’s ability to integrate with Microsoft Intune for managing multiple devices through the cloud.

But even as an enterprise device, the Surface Duo has a steep mountain to climb. Considering you can get a Surface Pro 7 for under a thousand bucks, the Surface Duo is a pricey boutique device that doesn’t seem to be all that convenient. Even if you can fit it in your pocket, you’ll need to open it to use it or even see who’s calling. Its size and lack of an outer screen will make simple things like taking pictures more difficult than other phones. And it remains to be seen how well the Duo will process photos and videos compared to other Android phones, even single-camera ones like the Google Pixel 4a.

Microsoft has built a device that plays by its own rules, but it’s breaking many of the conventions we take for granted along with way. 5G isn’t a necessity yet, but it will be in a couple of years. In a post-Covid-19 world, not being able to use your phone to make payments is going to feel antiquated. And the lack of wireless charging in a $1,399 phone is a major bummer.

But one thing is clear: Microsoft is finally back in the phone game with the Surface Duo, and Windows and Android fans alike should take notice. Even if they don’t buy one right away.

The Microsoft Surface Duo is available for pre-order todayRemove non-product link for shipping on September 10.