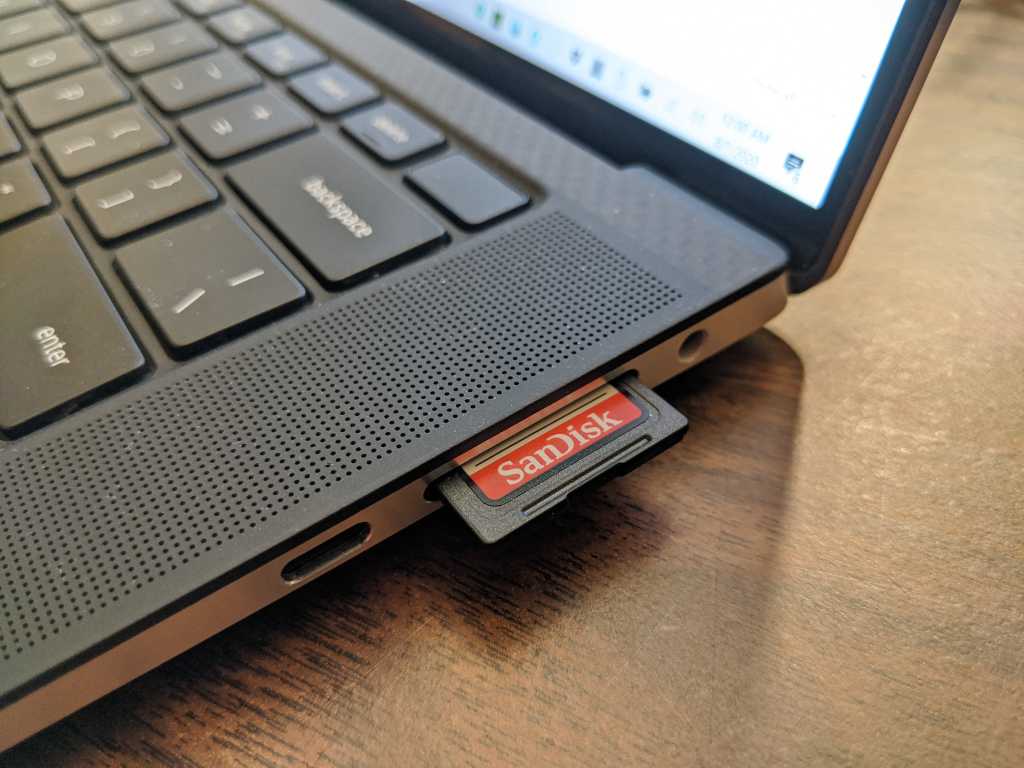 For content creators, a laptop with a built-in SD card reader is a preferred feature. Some users go so far as to consider laptops only if they have a reader.

One mistake with that choice is it assumes all SD card slots are created equal. Our tests clearly show they’re not. It’s also difficult to know how fast the SD card reader in your laptop is. If SD card speed really matters to you, the best way to get what you want is to buy an external reader whose specs are clearly designated.

PCWorld put four newly manufactured laptops’ SD cards through their paces. For this challenge we looked at:

To give us a control point, we also recorded the performance of a SanDisk Extreme Pro UHS-II USB 3.0 card reader inserted into one of the Dell G5 15 SE’s USB 3.0 slots.

This has a fast SD card reader 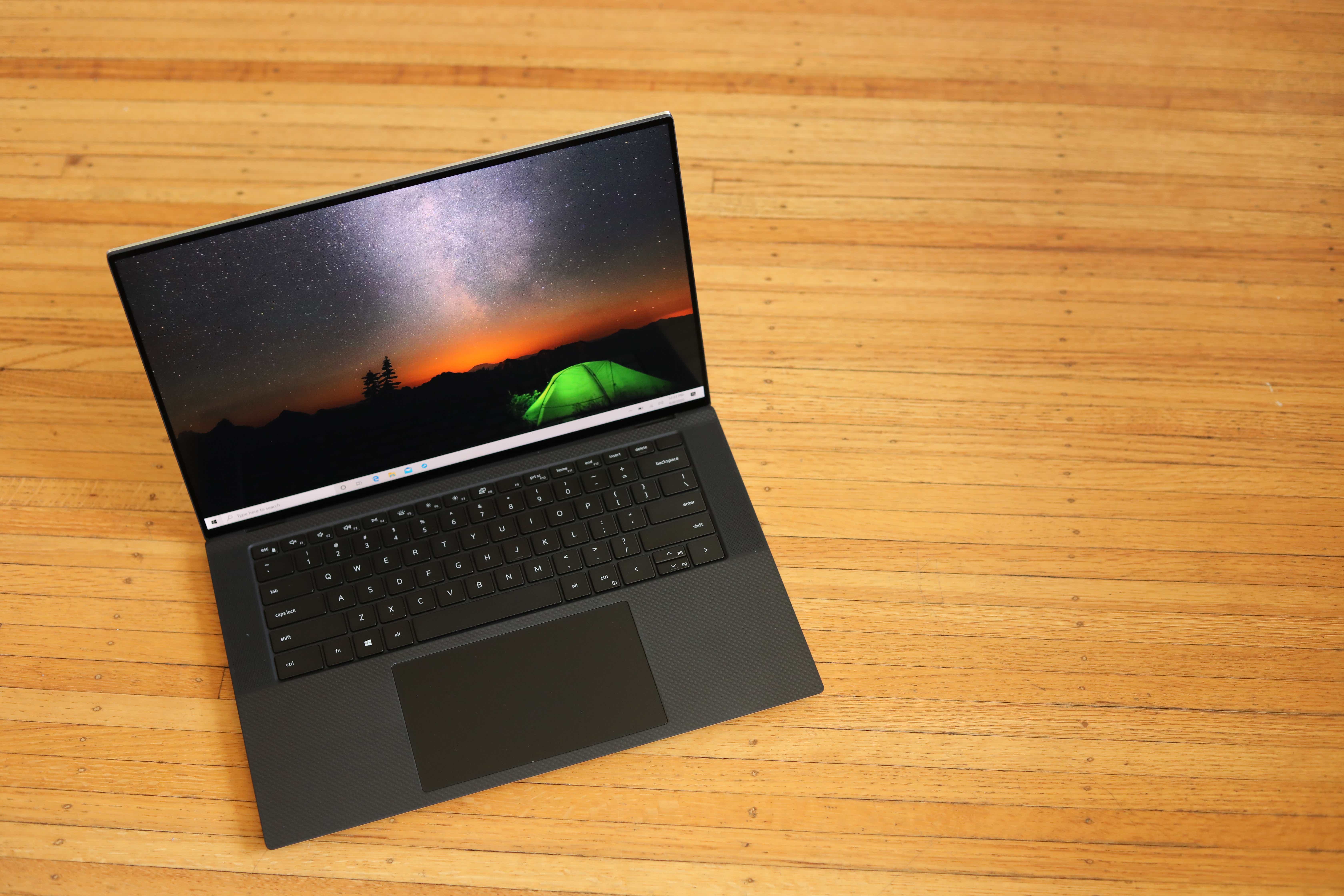 Because this test would be pointless without a fast SD card, we used a 128GB SanDisk Extreme Pro SD card. The card is a UHS-II card, meaning it rides on the Ultra High Speed II bus and features a second row of contact pins on the back to hit the higher performance ratings of the interface. The UHS-II bus can hit 312MBps in full duplex mode and 624MBps in half-duplex mode. We formatted the card in exFAT, which has seemingly become the standard for most large-capacity SD media.

The SanDisk Extreme Pro SD Card is rated for read speeds right up to the limit of UHS-II at 300MBps with write speeds rated at 260MBps.

If you’re wondering why we’re not using an even faster SD card using the newer UHS-III bus, it’s because we couldn’t find a card that even supported the newer interface, which takes speeds to 312MBps in full duplex mode and 624MBps in half duplex mode. Searching Amazon.com just last week, we saw no signs of a UHS-III card for sale.

(And no, don’t confuse UHS-III (the bus) with the U3 symbol. U3 refers to the card’s “UHS Speed Class” mark for video performance of a camera and card. Yes, they seriously have U3 and UHS-III which don’t mean the same thing. U3 has largely been supplanted by the newer and slightly less confusing “V” video speed class mark.)

We contacted SanDisk to ask why it wasn’t offering a newer UHS-III bus card. Company officials said it’s largely concentrating on the even faster SD Express standard, which has a speed limit of 3,940MBps.

All four laptops feature integrated card readers, but performance varied greatly, as you can see from our first test, Crystal Disk Mark’s default sequential read test. The Dell XPS 15 9500 comes out in front by a fair margin over the XPG Xenia 15 and Dell G5 15 SE, but it’s very close to the Gigabyte Aero 17.

Aero 17 and XPS 15 9500 users can be happy they’re getting awesome read performance, but you’re probably wondering just why the Xenia 15 and G5 SE 15 are sucking wind. You’ll see the reason if you look at the labels for the laptops above: It’s largely due to the card reader and the interface they’re connected to.

For the worst laptop here, the Dell G5 15 SE, it’s likely gated by the USB 2.0 interface it’s hooked up. USB 2.0 has a maximum theoretical speed of 480Mbps or 60MBps. Once you account for overhead it’s generally far lower than 60MBps.

After the Dell, the XPG Xenia 15 doubles the performance of the G5 15 SE with about 91MBps read speeds. The Xenia 15 highlights the other issue that matters for a laptop’s SD card reader: It’s not just the interface, it’s also what the host card reader is rated for.

For the Xenia 15, we couldn’t find anything other than that it’s a RealTek card reader on USB 3.0. Because USB 3.0 can reach speeds of 5Gbps or 625MBps on paper, we know it’s not the USB 3.0 interface. We can only assume that the Xenia 15 uses a UHS-I reader rated for 104MBps transfer speeds.

The winner of this, although not by the margin you’d hope for, is the Dell XPS 15 9500, with its UHS-III-rated RealTek card reader hooked up to the PCIe bus. The XPS 15 9500 has a decent edge, but it’s likely gated by the fact that we only have access to a UHS-II card for our testing.

Writing to the cards is slower for the XPS 15 and Aero 17 and largely a tie. The SanDisk Extreme Pro card reader also does a fine job. Meanwhile, the G5 15 SE and Xenia 15 are far, far behind the pack.

Writing to an SD card from a laptop isn’t something most people do. The most common method is to shoot photos or video to an SD card and then copy the contents to your laptop for editing in the field.

To simulate that we took a folder of 266 JPEG and RAW files totalling 3.4GB, shot with a Canon EOS 5D Mark IV. We manually timed how long it took to copy the files to the Windows desktop of each laptop. We performed the test three times, with reboots between runs to remove OS caching from equation. We also manually trimmed the laptop’s internal SSDs before testing was conducted.

The results largely mirror our read tests using Crystal Disk Mark 7. The higher-performance card readers all track very closely, the Xenia 15 achieves an acceptable 47 seconds, and the G5 15 SE strolls past the finish line the next day.

Our last test created a nine-minute video with the EOS 5D Mk IV, using its 4K video setting. The camera uses the insanely inefficient MJPEG codec at a 500Mbps bit rate, which produced a whopping 34GB file. As with our still image test, we take an average of manually timed runs with reboots in between.

With a file this large, we now see why having a high-speed SD card reader is so valuable. It takes a little over two minutes with the XPS 15 9500 and Aero 17 to copy a 34GB file to the desktop. The Xenia 15 takes about five additional minutes to copy over. The Dell and its USB 2.0-bound card reader takes a painful 15 minutes to do the same task. And remember: 34GB seems like a large file, but that means 90GB of video files would take probably 45 minutes. That’s time lost on the editing process.

The first takeaway from this is that clearly, not all laptop SD card readers are created equal. All four of the laptops we tested are current models introduced this year, yet we see a huge swing in performance.

The second takeaway is, stop turning up your nose at USB card readers. We’ve talked to content creators who see a lack of an onboard SD reader as a reason not to buy a particular laptop. But you just don’t know what level of card reader you’re going to get, even on new laptops. So just buy a verifiably good external reader and don’t look back.

The third recommendation is not to get too caught up in wanting UHS-III. Some new laptops have touted UHS-III support as a bullet point, and to be fair, the Dell XPS 15 9500’s UHS-III reader on the PCie 3.0 bus was consistently the fastest in our tests. It’s just not clear that the standard will matter if card makers skip UHS-III cards for SD Express.