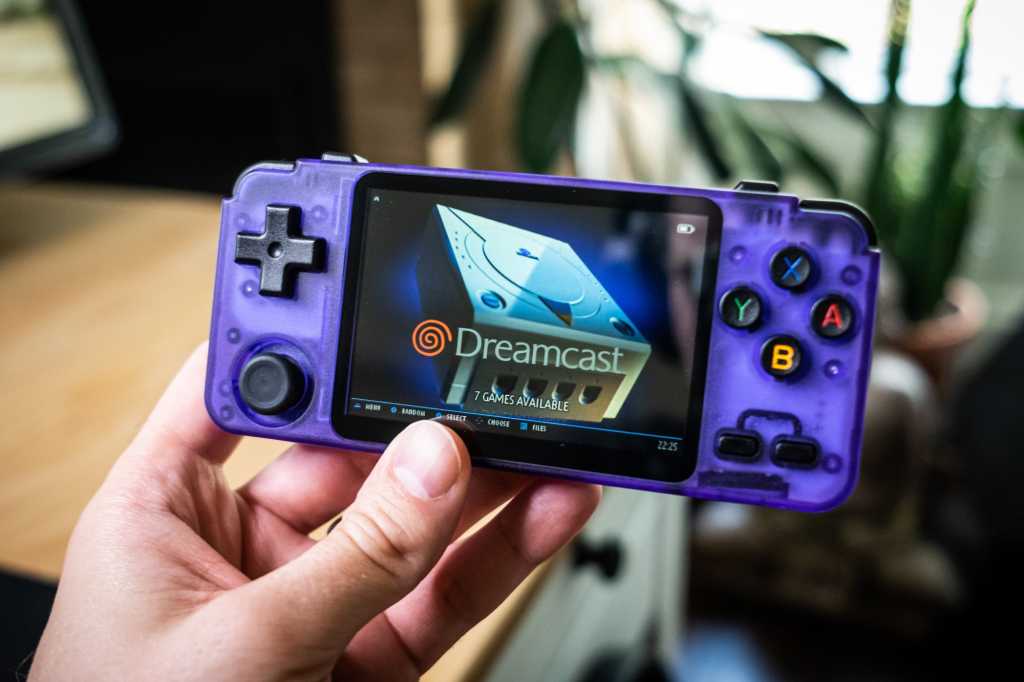 The RK2020 is one of the best handheld gaming emulators you can buy right now, playing PS1 games with ease, but stumbles with Dreamcast and PSP.

There’s never been a better time to be a retro gamer, especially if you want to carry the classics around in your pocket. The RK2020 from RK Console is yet another in a long line of handheld emulation devices that plays games from a wide range of classic consoles.

While RK2020 plays everything from NES to PS1 with ease thanks to powerful hardware, it falls just short on Dreamcast and PSP emulation. The RK2020 comes in three different case variations and the pricing can be found as low as $70—which is the highest-priced device like this I’ve tested so far. Despite those minor drawbacks, this is one of the best handheld emulators you can buy, and it’s become my go-to device for retro gaming in the palm of my hand.

Included in the box:

Main emulators included with the RK2020:

The RK2020 comes in three different case options. I was sent the Crystal Purple variation that harks back to the semi-transparent plastic Atomic Purple color found on GameBoy Color. It’s a fun look that matches the portable nature of this handheld. The Aluminum version looks nice as well but is a pricer option at $120. You can also get the handheld in Crystal Black.

The RK2020’s build quality is rock solid, but the edges aren’t rounded off enough for my taste, which contributed to a bit of strain when held for long periods. The 3.5-inch screen looks nice and bright, with sharp pixels and no signs of ghosting. The battery life lasts around a solid 4 hours depending on the emulator being used—more graphics intensive games can cut that to almost half.

The D-Pad is above the analog stick (the way it should be) and taller than the ones found on other emulators like the New PocketGo. I found it somewhat stiff, but the added height helped differentiate between the various directions. The analog stick also stands taller than usual on a device like this, but it sits inside of a recess that allows it to be a traditional ‘stick’ rather than a ‘sliding pad’ like is found on the New PocketGo. It’s a better design, but it’s still subpar compared to console controllers, and I gravitated towards using the D-Pad as much as I could. 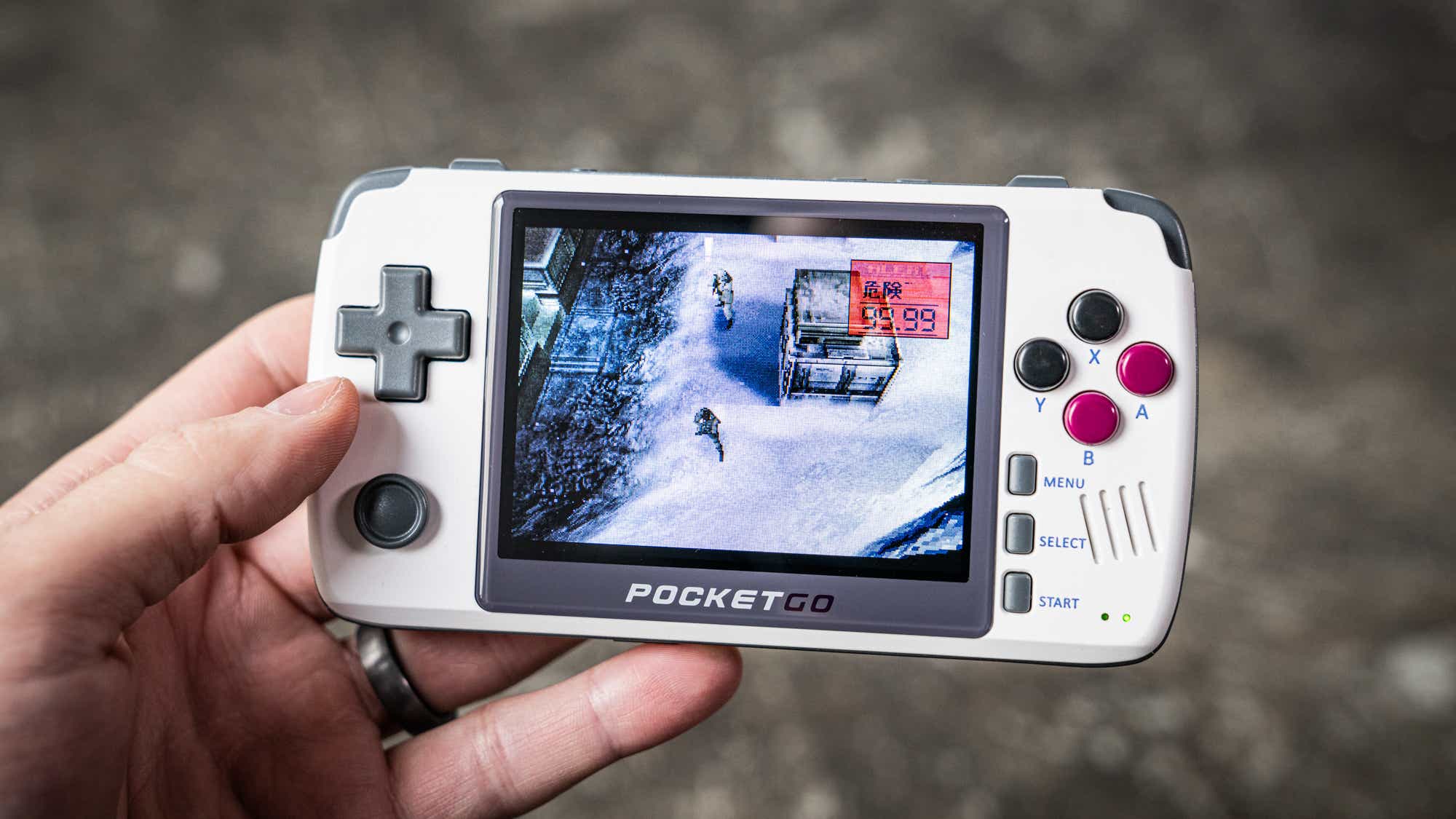 The face buttons on the RK2020 offer my favorite tactile feel out of every handheld emulator I’ve tested so far—they are terrific. The height off the face plate gives more than enough depth for a satisfying trigger, the circumference of each button is wide enough to find easily, and the distance between each button is perfectly placed to ensure no false presses. Button presses offer a very healthy resistance that gives plenty of feedback, though there is a bit too much wobble for my liking at either end of the press. The only downside to the face buttons is the close placement to the screen. There were times where my thumb would creep over the screen a bit too much. The RK2020 is relatively small, and I would have been fine with a wider system to help counter this.

Unfortunately the Start and Select keys are almost flush with the face plate, making it hard to trigger them without either glancing down or sliding your thumb a bit to double-check its placement. Worse, the way you leave most emulators requires pressing both of those buttons at the same time, twice. It never felt good, and I really wish they were raised out of the system more. The Select button also needs to be pressed at the same time as X in order to bring up the emulation settings, another action that never felt normal or natural thanks to the placement of the buttons.

Because the device is so thin the RK2020 features a side-by-side shoulder button placement rather than stacked. I’ve used this placement enough to get used to it, but it’s not my preferred design. I’d rather see a thicker system to accommodate stacked shoulder buttoms. Luckily, the buttons do have plenty of separation, and the clicky triggers take just enough pressure to engage, but aren’t loose enough to allow false presses.

The bottom of the RK2020 features one MicroSD card slot and a very tinny speaker. You’ll find a power button, headphone jack, USB-C port for charging, and USB Type A port up top. The USB-A port allows use of a WiFi dongle or external controller which can be set up inside the OS. There is no volume control, which is a shame. Instead, volume is handled by once again holding down the Select button and then pressing up and down on the D-Pad. It’s not great, especially with the Select button’s design, but honestly not as bad as I thought it would be at first.

The RK2020 now ships with RetroArch installed, an upgrade over the custom Linux operating systems common in most handheld emulation devices. I say “now” ships because when the device was first launched it ran firmware from another handheld emulator, the ODROID GO Advance. And it wasn’t just firmware—the RK2020 even included some of the hardware as the OGA. Copyright laws are very different in China than the U.S., but it’s a bad look for the RK2020. Luckily, RK Console addressed the firmware issue at least, and the RK2020 you can buy now ships with RetroArch.

The combination of RetroArch and the RK2020’s quad-core CPU with 1GB of RAM ensured most emulators ran very smooth. RetroArch is very customizable. It includes a lot of different view options of your collection, can be connected to scraping services for things like box art, and offers an all-around better user experience than what you find on most handheld emulation devices. Running 8- and 16-bit games went blissfully hitch-free, even in games that feature more strenuous visual processing, like F-Zero and Super Castlevania IV. But at this point we already know that most 2D-based game consoles will run fine on systems like these. What about 3D?

PlayStation 1 performance was hit or miss on the New PocketGo, but the increased hardware power of the RK2020 allowed almost every PS1 game to run as intended. This time around it’s Dreamcast and PSP emulation that proved touch and go. I had to turn frame skipping on for most games. That feature cuts the frame rate in half, but usually allowed for a smoother play experience. Games like Soul Calibur 2 that already run at 60 frames per second natively remained playable at a locked 30fps and look fantastic. Frame skipping wasn’t a universal cure though. Games like Jet Set Radio that already runs at lower frame rates just didn’t work out—a real bummer.

Keep that in perspective though. Most handheld emulators can’t run any Dreamcast games well. The Dreamcast is probably my favorite console of all time, so getting to run some of these games on the RK2020 is a real treat, and something I didn’t see coming so soon after the New PocketGo’s struggles with 3D gaming.

Nintendo 64 performance, on the other hand, was not so good. There are two problems here. One has to do with the rendering on N64 games in modern emulators, and the other deals with the controls. The N64 controller setup is a joke (though some of my colleagues disagree) and mapping that oddball control scheme to this handheld device’s completely different layout is just a bad situation. I’m not going to go into too much detail here because I think it’s obvious, but I could never find a configuration that felt natural to incorporate the buttons needed for most games.

In terms of emulation, I once again had to run everything with frame skippping active to get smoother Nintendo 64 gameplay, but I still ran into plenty of stuttering, hitching, and screen tearing. With some work to the emulator settings I’m sure you can get closer to a playable state, but I didn’t take the time to do so, because playing games with awful controls feels awful.

PSP performance was all over the place, mainly due to the radically different game types available on that console. 2D-based games, or games that had very minimal 3D interaction, actually ran surprisingly well with frame skipping on, and I was even able to get a few games to run fine with frame skipping off—Tactics Ogre and Persona 3 Portable for example. Intensive 3D games like God of War: Chains of Olympus and Metal Gear Solid: Peace Walker on the other hand really struggle to hold framerates and exhibit many other problems as well. Bottom line: PSP performance is very game specific, but just know that the RK2020 just doesn’t have enough power to play everything with ease.

Thanks to extra horsepower, (mostly) comfy controls, and sharp screen, the RK2020 has become my go-to device for handheld emulation of classic games. The price is a little more than my last favorite device, the New PocketGo ($65 vs $70), but you get is a more powerful system that can actually play some Dreamcast and PSP games. That’s worth the extra cash.