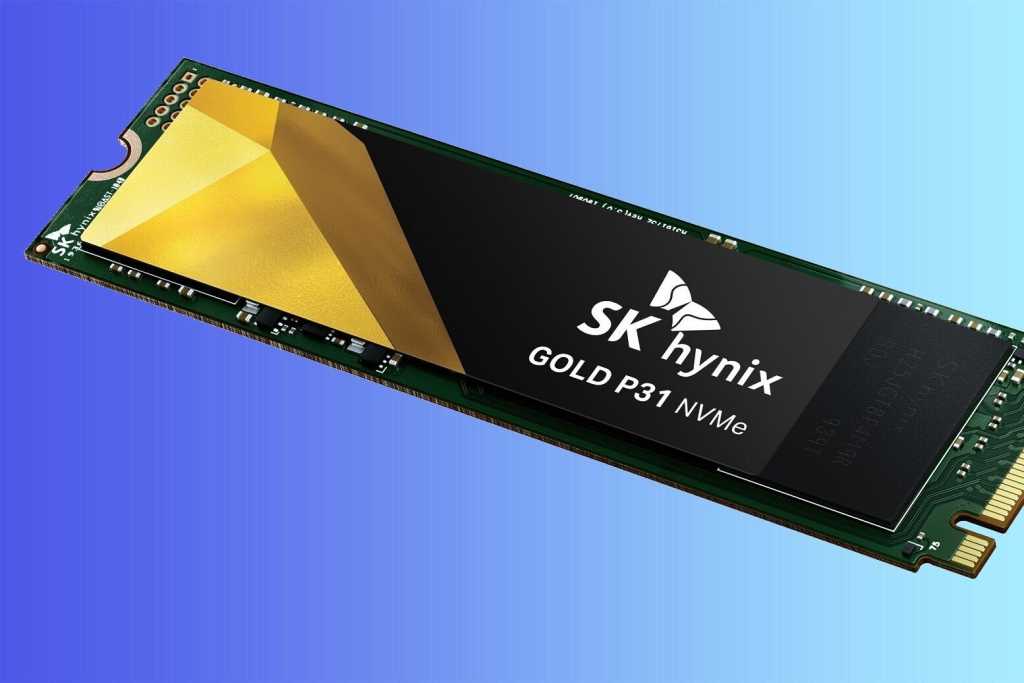 The SK Hynix Gold P31 NVMe SSD moves the needle on the industry seismometer just enough to makes this review far easier to write. Two points alter the needle’s path: The P31 is not only the first drive to sport 128-layer TLC NAND, it’s also the first in my experience to feature eco-friendly packaging. Huzzah!

Editor’s note: On August 31st, 2021, SK Hynix sent us the newly released 2TB version of the Gold P31 ($280 on Amazon). In testing, the performance was within half a percent either way of the the 1TB version reviewed here, which was first published on August 19, 2020.

While the SK Hynix Gold P31 uses the same 2280 (22 mm wide, 80 mm long) form factor as most SSDs, the similarities stop there. Instead of the usual 96 layers of TLC NAND, the P31’s TLC NAND sports 128. How this translates to “4D,” as the company refers to it in the product brief, rather than 3D, I’m not sure. There’s DRAM cache on board, and NAND is employed as secondary cache, though we were not given the amounts involved. Whatever they are, they’re effective.

Regardless, it’s a first and translates to more memory per chip and lower prices: The 1TB capacity we tested is $135 on Amazon, while the 500GB is $75 on AmazonRemove non-product link. A newer 2TB version costs $280. There are cheaper drives, you say? Sure, by a little, but read the performance section below.

The P31 carries a five-year warranty, a 1.5-million hour-MTBF (Mean Time Before Failure) rating, and 500TBW rating for the 500GB and 750TBW for the 1TB which are more than decent numbers. That info gives us a sunny outlook on the lifespan of the drive, though in truth, SSD failures are almost unheard of in the end-user space these days.

I must once more mention the eco-friendly packaging. In a world where every product seems to add another layer of detritus to landfill, the P31 is a pleasant exception. I won’t talk about e-waste—that would ruin the mood.

The 1TB P31 I tested absolutely aced the CrystalDiskMark 6 and AS SSD synthetic benchmarks. It hit nearly the 3.5GBps read and write speeds claimed in the press release. Close enough to call it true, given that our testbed is several generations old.

Though not as fast as Seagate’s FireCuda 520, the P31 held its own in every real-world 48GB transfer except, somewhat oddly, the small file read test. There it proved a half-minute slower than the competition. It struggled on small .jpg files more than most, which could have something to do with the onboard compression algorithms.

The P31 redeemed itself with a mighty performance writing our large 450GB file. This is not something users often do, but it is a good test of cache management, and occasionally NAND speed. Notice the rather grim results turned in by the Crucial P5 and Samsung 970 EVO Plus. That’s what happens when you run out of cache. We’ve seen even worse from bargain drives.

Note that you won’t get quite the same performance out of the 500GB P31, especially when you go off cache. However, the claimed performance says it should remain sprightly, except during the 450GB write, where it would drop to 950MBps and take commensurately longer.

The SK Hynix Gold P31 performs like a top-tier drive, but it’s priced just slightly higher than bargain drives. That, my friends, is a real bargain. If 1TB or 2TB of capacity meets your needs, move this to the top of your list.

Editor’s note: This article was edited a few hours post-launch to correct the TBW rating for the 500GB drive to 500TBW from 350TBW, based on new information provided by SK Hynix.