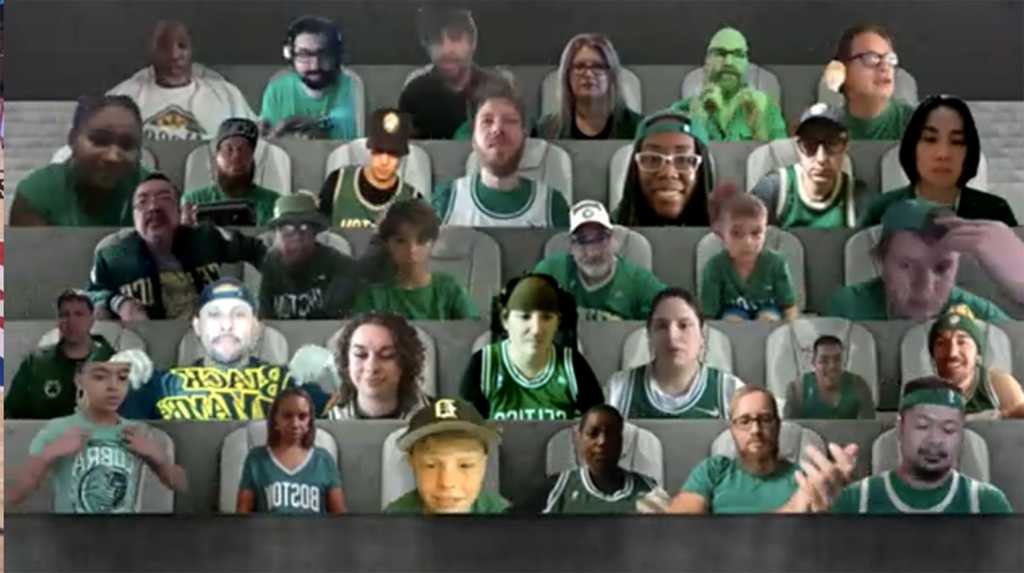 As a New Englander, I’ve been to my fair share of Boston Celtics games. I was in the stands for Paul Pierce’s “Wheelchair Game.” I was watching when LeBron James torched them for 21 points in the first quarter during the 2010 Playoffs. And I was there a few months later when the Celtics stunned LeBron in his first game as a member of the Miami Heat.

But none of those memorable moments can really compare to Sunday’s game. While millions of people were watching the Celtics sweep the Philadelphia 76ers in this first round of the NBA playoffs Sunday afternoon, I was lucky enough to be in the stands cheering them. OK, I wasn’t actually there, but if you were watching the game, you might have seen me.

I scored a virtual seat to watch the game with a group of fans over Microsoft Teams. Since the COVID-19 pandemic has rejected any chance of fans gathering in giant arenas to watch live sports, Microsoft, Michelob, 1Iota, and the NBA have teamed up to offer fans around the world a chance to sit courtside during games and cheer on their favorite team as if they were in the arena.

The whole process is very simple. I received my virtual ticket on Friday night instructing me to download the Microsoft Teams app to my Mac or PC before Sunday morning. As Microsoft repeatedly told the lucky fans who were chosen, neither the web version nor the mobile Play Store version supports the live virtual viewing, so Android tablets and Chromebooks aren’t ideal either. I was also told to find a spot in my house with a plain wall and we were encouraged to wear fan gear but refrain from bright colors that weren’t related to our team and holding up signs. And wearing a costume would get you tossed.

I received a login link at around 11:30 a.m. on the day of the game and went through a short registration process that mainly consisted of uploading a copy of my driver’s license for verification purposes. Then I waited for further instruction. About an hour later, I received a unique login and password for Microsoft Teams, fired up the app, joined the meeting, tested my camera, and waited to be led to my seat.

While I was waiting, an NBA moderator muted the room and ran us through the rules. We were instructed to keep our energy up throughout the game—and warned that we might be removed if we weren’t properly enjoying ourselves. We were also told to refrain from cursing or insulting players, and avoid rotating the person on camera. Dogs and cats were OK, but only one person was allowed in a seat at a time. And if we had to leave, the NBA stressed that we should leave our camera on, since turning it off is akin to giving up your seat.

Next, a Microsoft Teams representative came on to help us get set up. We were told how to get both the Game Feed and the audience view on our screens and suddenly we were transported into a virtual seat as if we were sitting right in the arena. Since the TV broadcast is on a 10-second delay, we were told to watch the game within Teams so we would be reacting to the appropriate plays. Despite my courtside seat, I wasn’t rubbing elbows with celebrities (they get their own login), but I was in a room with about 30 other people—mostly Celtics fans even though it was technically a Philly home game.

We heard the same spiel two more times for additional groups, so the excitement building in the room wasn’t quite what it is in an arena when lights go out and the starting lineups are announced. Even once the game started and we were unmuted, it was more of a chat room than a cheering section. There was the usual clapping for made baskets, groans for missed ones, and griping over fouls, but it never quite reached the level of emotion you get at an actual arena, even before the game turned into something of a blowout.

There was a chat function that was supposed to be limited to tech support, but fans inevitably filled it up with trash talking and in-game comments. Still, it was surprisingly cordial and fair. I was asked to give up my seat at halftime to let someone else sit, but I was able to find a seat in the fourth quarter. Even as the clock ticked closer to the sweep, my room of mostly Celtics fans was happy for the win but reserved, and I wonder what it would have been like during a tense game like the Clippers-Mavericks later that afternoon when Luka Doncic hit a game-winner in overtime.

When the game was over, some fans stayed to chat and others immediately filed out. I stayed for a bit to see if I would be kicked out, but even though the feed cut off, we were able to stick around and chat.

While the game was relatively boring, the experience was definitely fun. Family and friends got to see me on the TV broadcast, I got to hang out and chat with some super fans, and most importantly, it felt like I was part of the action in a whole new way, even though I was watching the same feed as I would be on my TV.

It didn’t quite match the excitement of being in the arena, but it’s a great way to get fans involved and I wouldn’t be surprised to see it continue even after fans can gather again. I might even pay $5 or $10 for it if I got an exclusive feed that mimicked what it would be like to see the game from where I was “sitting.” Or maybe if I got a guarantee to be on camera.

Every pro sport has its own social distancing gimmick, but the NBA is the only one that has truly created a fan experience. The MLB cutouts are cute but ultimately silly, the NHL’s prerecorded video is somewhat impersonal, and fake crowd noise—which the NBA also uses—is more for the players than the fans. But getting to sit courtside and cheer on my favorite team was pretty awesome. Even if I wasn’t actually there.