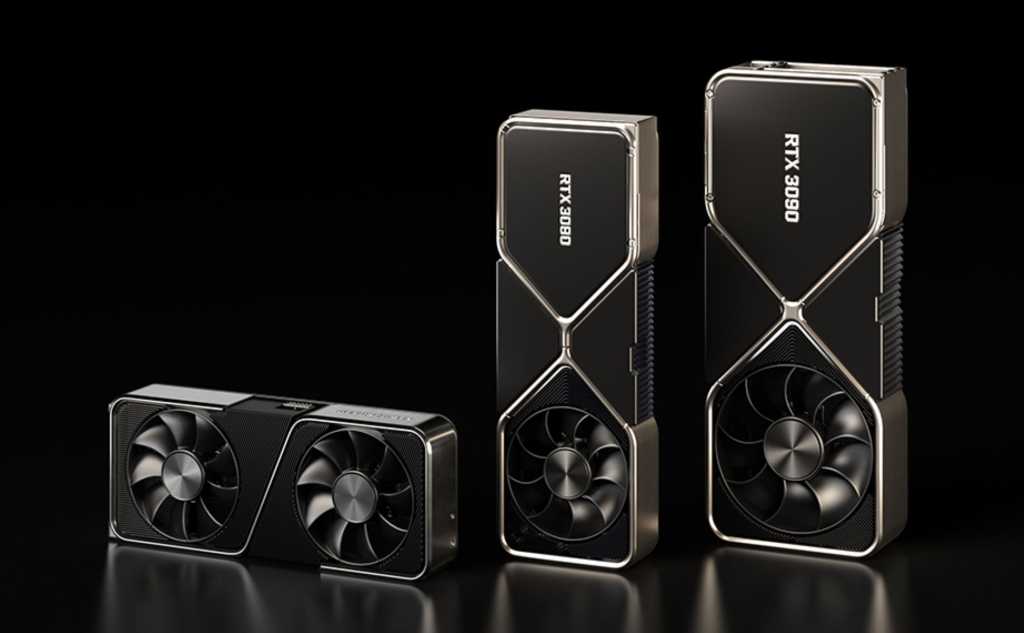 Nvidia unveiled its RTX 30-series graphics cards Tuesday, two long years after the GeForce RTX 20-series kicked off ray tracing in earnest. The wait was worthwhile: The 30-series looks monstrous, spearheaded by a fully loaded, 8K-ready $1,400 GeForce RTX 3090 “BFGPU” that revives the dormant xx90-class brand previously reserved for dual-chip beasts. The $700 GeForce RTX 3080 and $500 GeForce RTX 3070 were also announced. All of them will include a radical new RTX IO technology designed to rival the ultra-fast storage technologies coming to the next-gen consoles.

Oh, and ray tracing is coming to Fortnite. And new Nvidia Reflex software will make you much more deadly in esports games. And Nvidia Broadcast will use the AI tensor cores inside these new GPUs to spruce up the audios and visuals of your game streams in real time.

The GeForce RTX 3090 is so crammed with new technology that Nvidia needed to create a new 12-pin power connector and a radically overhauled cooling system just to fit it all in. The GeForce RTX 3080 and GeForce RTX 3070 aren’t quite as ludicrous, but they nevertheless look poised to outpace their predecessors in both traditional and ray traced games—quelling a key criticism of the older RTX 20-series GPUs, which focused more on introducing ray tracing than advancing pure gaming performance.

Bottom line: These suckers will be fast.

Let’s take a look at the light, high-level specifications that Nvidia revealed before diving into the nitty-gritty. Take the performance comparisons with the caveat that they likely cite best-case performance scenarios with ray tracing and DLSS enabled, rather than just traditional gaming frame rates. For an even deeper dive, check out our GeForce RTX 30-series vs. RTX 20-series spec comparison.

On to the nitty-gritty:

The GeForce RTX 30-series builds on the foundation set by its predecessors, with more advanced RT cores and third-generation tensor cores inside of its new-look “Ampere” GPU architecture. All those additional cores should improve ray tracing and Deep Learning Super Sampling performance, respectively.

Nvidia’s new chips also make the jump to 8nm process technology, moving up from the 12nm process used in the RTX 20-series “Turing” GPUs, which itself was an optimized iteration of the 16nm process used in the GTX 10-series. This is the first major process node leap in a while, and it should provide a big boost in traditional gaming performance. The last time Nvidia moved up a node, the GTX 10-series blew away its predecessors. Leaping to the 8nm process gave AMD’s rival Radeon RX 5700 graphics cards a huge boost in both performance and power efficiency.

Nvidia says its new Ampere GPUs offer twice the energy efficiency of Turing, with shader cores that are 2.7X faster than the ones inside the GeForce RTX 20-series. The revamped RT and tensor cores will be 1.7X and 2.7X faster than their predecessors, respectively, which should help deliver huge performance gains in games with ray tracing and/or DLSS 2.0 enabled, as shown in the chart below.

Nvidia didn’t give any concrete numbers for traditional gaming performance during the presentation itself, but the company’s GeForce RTX 30-series landing page dished out more details afterward. The company says the GeForce RTX 3070 will spit out frames faster than the previous RTX 2080 Ti flagship at 4K in “average performance across multiple popular graphics intensive games,” while the GeForce RTX 3080 will be significantly faster.

The GeForce RTX 30-series’ secret sauce isn’t limited to GPU improvements alone. The GeForce RTX 3080 and RTX 3090 will include cutting-edge GDDR6X memory. Nvidia co-developed it with Micron, and Nividia’s Huang claims it can transmits twice as much data as traditional GDDR6 memory in the same amount of time. (The GeForce RTX 3070 still uses GDDR6.) The GeForce RTX 3090 packs a whopping 24GB of GDDR6X, while the RTX 3080 includes 10GB. Nvidia plans to put all those gigs to a newfound use: Improving game loading times.

Nvidia’s new RTX IO technology puts the speed of PCIe 4.0 storage to more efficient use, routing some loading data over the PCIe 4.0 connection of the GeForce RTX 30-series GPUs to tap into their blazing-fast onboard memory, rather than routing all that information through the CPU first. Huang didn’t go into much detail, but claims the technology will offer 100X faster throughput and 20X lower CPU utilization than traditional methods. If true, those speeds will no doubt come in handy, especially when you’re loading worlds using massive 4K or 8K textures.

Whether developers will need to support RTX IO explicitly remains to be seen, but the technology leverages the Microsoft DirectStorage API for Windows—the same technology underpinning the Xbox Series X’s ultra-fast Velocity Architecture. Fingers crossed this will be as awesome as it seems; if so, it could be just as much of a game changer for enthusiast-class PC gamers as ray tracing itself is.

All three of the graphics cards include an “ultra-compact” PCB with 18 phases of power, and the GeForce RTX 3080 and RTX 3090 feature Nvidia’s redesigned cooling solution. The new cooler still packs dual fans, but in independent push/pull configurations with different aims. The one closer to the rear of the system sucks in air and blows it out of your graphics card’s I/O bracket, following traditional methods. The one in front leverages the shorter PCB to intake air and then expel it right back out of the top of the graphics card, letting your case’s rear fan outtake handle more of the thermal load.

Given all the engineering efforts required to invent this cooler, it should come as no surprise that the power requirements for these GPUs are much heftier than the previous gen. The GeForce RTX 3090 draws a whopping 350W, the GeForce RTX 3080 draws 320W, and the GeForce RTX 2070—which, looking at the rendering above, does not use the new-style cooler but rather a standard dual-axial design—draws 220W. By comparison, the flagship GeForce RTX 2080 Ti was rated for 260W.

Nvidia CEO Jensen Huang kicked off the event by announcing that real-time ray tracing and DLSS 2.0 are coming to Fortnite. Those technologies debuted in Minecraft earlier this year to startling effect, so now Nvidia has the two most-played games in the world on the RTX bandwagon.

But looks aren’t everything. In the blink-and-you’ll-miss-it world of esports, every frame matters. A delay of even a few milliseconds can mean the difference between death and victory. To help you in your battles, the newly revealed Nvidia Reflex software optimizes the rendering pipeline in games to improve latency by up to a whopping 50 percent. If it works as promised, this could give you a massive advantage versus your competition. Call of Duty Warzone, Valorant, Fortnite, and Destiny 2 will be among the first games to support Nvidia Reflex when it launches this month.

Finally, this streaming thing isn’t going away, and Nvidia Broadcast brings the power of the GeForce RTX 30-series GPU’s advanced tensor cores to bear on real-time audio and video processing. The software works on any RTX graphics card—not just these new ones—and includes the magical RTX Voice noise-cancellation feature, along with adjustable background blur, greenscreen-style background replacement, and automatic head-tracking effects for your video feed. Even the greenest Twitch streamers can get a professional-seeming setup up and running quickly with that toolkit. Nvidia Broadcast is also launching in September.