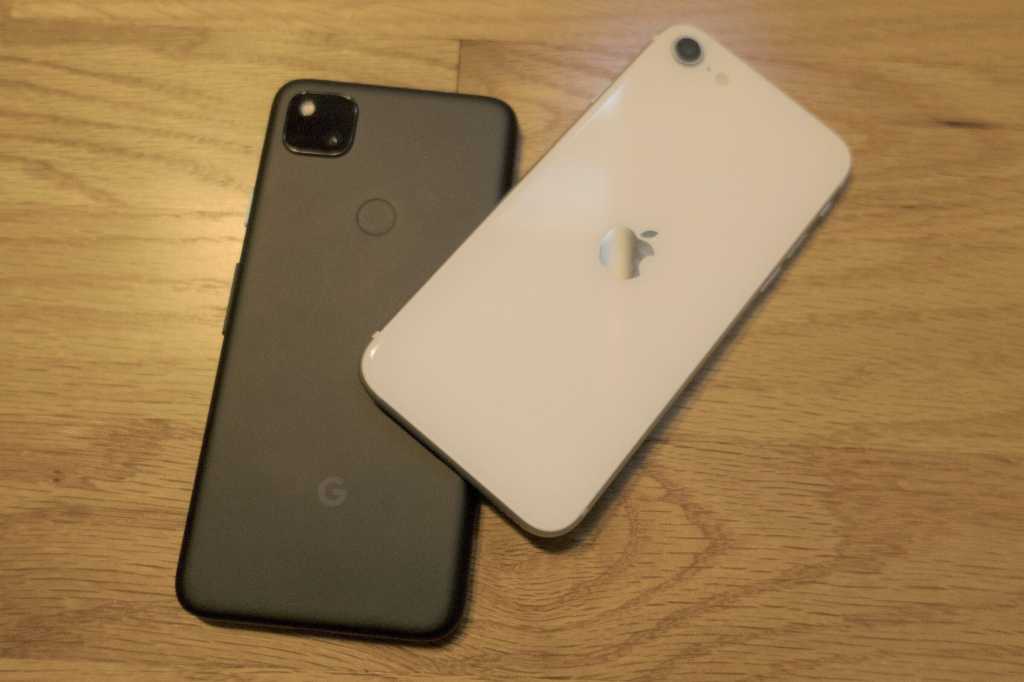 While you can spend a thousand bucks or more on a phone if you want, you don’t actually need to anymore. In the past few months, Apple and Google have both released impressive mid-range phones that cost less than $400 and bring many of the features usually reserved for premium handsets, including wireless charging, all-screen designs, and impressive battery life.

But as with all things Apple and Google, the iPhone SE and Pixel 4a are not created equal. But I wanted to see just how different they are. I had been using the iPhone SE since receiving it in early June, so when the Pixel 4a arrived on my doorstep, I popped out the SIM and jumped back into the world of Android. Here’s what I learned:

Speed isn’t all that important

The biggest selling point of the iPhone SE is its processor. Apple gave its low-cost SE the same A13 chip that’s inside the flagship iPhone 11 Pro, and you can definitely feel the power when launching apps and multitasking. It’s a whole lot faster than the Snapdragon 730G inside the Pixel 4a. But while using both, the Pixel 4a didn’t really feel that much slower during day-to-day use thanks to Android 10. Frankly, the people buying these phones aren’t going to be looking for flagship-level speeds anyway. It’s nice for sure, but not necessary.

The iPhone SE might start at $399, but most people should opt for the $449 model with 128GB of storage. System files and formatting take up 5GB-10GB or more, and when you factor in photos, videos, and apps, 64GB can fill up very fast.

I didn’t really notice how conservative I was being with my space until I started using the Pixel 4a, which comes with 128GB of storage, twice as much as the $899 Pixel 4 XL. Where I was judicious about photos and apps on my iPhone SE, I didn’t hesitate to install or download anything on the Pixel 4a.

Ever since the Pixel 2, Google has included a cool ‘Now playing’ feature that automatically scans the surrounding area for music and identifies what it hears. It’s a fantastic feature that Apple could easily mimic, and it wouldn’t even have to build its own database or algorithm as Google did. Apple already owns the Shazam song identification service, and could use it to build a speedy, private, and delightful feature for the iPhone that’s just as good as it is on the Pixel 4a. Instead, the only feature it’s added to Shazam is an automatic Apple Music playlist. Yawn.

Read more about the iPhone SE and the Pixel 4a:

Google out-designed Apple for once

While the iPhone SE is certainly a well-built phone, there’s no getting around its 2016 design, with giant bezels, lots of wasted space, and a home button. The Pixel 4a, on the contrary, looks a lot like the iPhone 11, with a near-all-screen design, rear fingerprint sensor, and rounded corners on the display. It looks better and more modern than the iPhone SE and doesn’t feel cheap, either. But Apple wins with colors. Sadly, you can only get the Pixel 4a in black (though I really like the mint-green power button.)

Google revolutionized nighttime shots with Night Sight on the Pixel 3, and Apple followed suit with its own Night mode on the iPhone 11. You can quibble over which produces better results, but there’s no denying that both represent a huge leap for low-light smartphone photography. If you buy a Pixel 4a, you get it—and even without a dedicated image signal processor, it’s nearly as good as it is on the flagship Pixel 4 XL. Apple has inexplicably left Night Mode off the iPhone SE, and the camera suffers as a result.

Wireless charging is, too

When Apple finally released an iPhone with wireless charging in 2017, the Android world scoffed. After all, most flagship phones had enjoyed the convenience of wireless charging for years. Fast-forward three years and nearly every phone has it, for good reason. Wireless chargers are cheap and a great way to make sure you never run out of juice. But sadly, you’ll need to plug in the Pixel 4a to charge it. I lost track of how many times I mindlessly placed it on one of my wireless chargers before remembering I needed to plug it in.

Google famously promises Android version and security updates “for at least 3 years from when the device first became available on the Google Store.” That means anyone who buys a Pixel 4 will be guaranteed to get Android 13 when it arrives in 2022.

Apple makes no such assurance because it doesn’t have to. When iOS 14 releases later this month, it’ll be available to both new and old iPhone SE users, even those who bought their phones in 2016. That’s a huge advantage for Apple that Google should match.

You don’t need to be a pixel purist to see that the screens on the iPhone SE and Pixel 4a are quite different. First, there’s the size, which is 5 inches for the iPhone SE versus 5.8 inches on the Pixel 4a. You also get a higher resolution on the Pixel 4a (1080p vs 720p), with a higher ppi density (443 vs 326). Google uses OLED compared to Apple’s LCD, which means blacks are deeper on the Pixel 4a.

The Pixel 4a is the first plastic-backed phone I’ve used in a while, and I’m smitten. It feels good, looks good, doesn’t pick up fingerprints, won’t break when it drops, and shaves several grams off of the weight (143 grams, versus the iPhone SE’s 148 grams). Apple hasn’t made a plastic phone since the “unapologetically plastic” iPhone 5c way back in 2015, but it might be time to give it another shot.