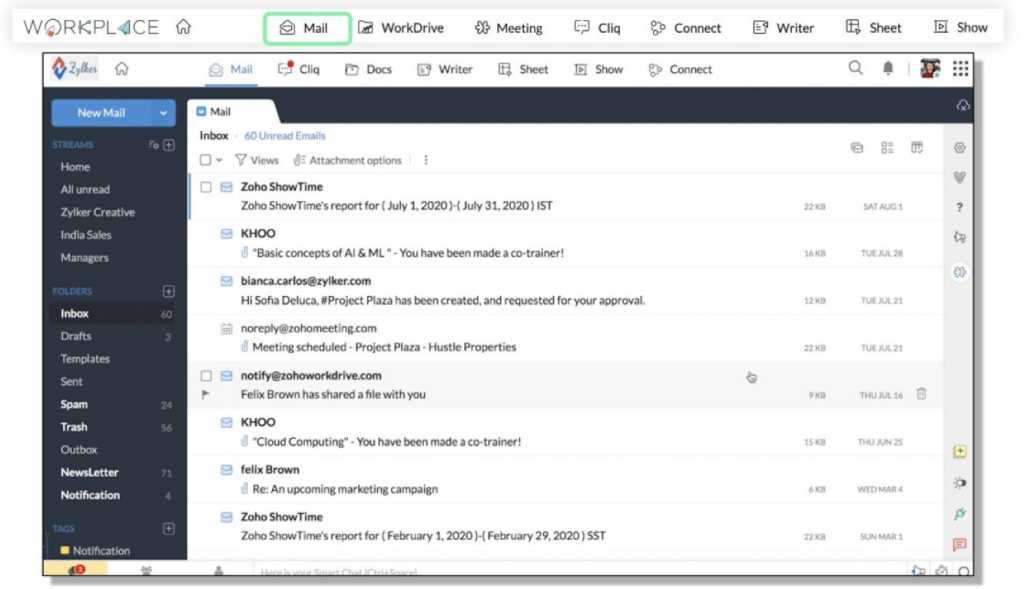 Zoho on Thursday introduced Zoho Workplace, a cloud-first suite of nine office productivity tools that are more tightly integrated than ever before.

Zoho Workplace ties nine of Zoho’s existing productivity apps into a web-based UI. It’s reminiscent of the sort of app ribbon that unites some of Microsoft’s Office products, such as Outlook, or the icon menu that you can click while working in Google Docs, for example.

The new Workplace connects the nine basic Zoho apps: its Writer word processor, Sheet spreadsheet, and Show collaborative presentation software; the WorkDrive cloud storage app; the Mail email, Meeting videoconferencing, and Cliq messaging apps; as well as the ShowTime online training app and Zoho’s Connect social Internet app. If you’re a Zoho One customer, you’ll have access to Workplace, according to Taylor Backman, a senior evangelist for the company.

So who is Zoho? While Google’s G Suite goes toe-to-toe with Microsoft 365 and Office, Zoho has quietly established itself with 15 million users across 2 million organizations. Zoho’s share pales in comparison to Microsoft’s, which reported 42.7 million consumer Office subscribers in its latest quarter, excluding the corporate users it doesn’t disclose. But Zoho’s platform, at least on paper, offers many of the same features, all for Workplace pricing plans that range from $1 to $3 to $6 per user, per month. The private company also has numerous specialized apps for CRM to IT management to web-based sales, even as its Wikipedia entry runs just a handful of sentences.

According to Backman, the new Workplace doesn’t offer anything new in terms of apps. What Zoho is trying to do is integrate the separate Workplace apps into a cohesive whole. “So at the top of the screen, when you log in, you’ll see all the tools that you can use. You have a sort of canvas-like dashboard that brings together all the data from these different tools, which you can customize as you see fit,” Backman said.

At the bottom of the screen, Zoho is building in a taskbar that can be used as an interface to launch chat or videoconferencing apps like Meeting, in case users can’t hash it out in Mail or the Cliq social app. Finally, Backman said, Zoho is building in an enterprise search bar that will allow users to find a document or coworker quickly.

While Microsoft has developed Teams both for business as well as virtual classrooms, Zoho is playing it straight. Workplace is being designed for businesses first and foremost. Businesses may mix and match elements of the UI as they see fit.

For now, Workplace exists as a strictly web-based UI. While Zoho does have mobile apps like Zoho Meeting, Projects, and Zoho One, Backman said that Zoho is discussing how to integrate them and their UI without overwhelming users.

While it’s becoming more commonplace for apps to be integrated—email and calendaring now are essentially one and the same, for example—Zoho’s pushing hard to make integration, say, with Mail and Writer and Cliq part and parcel of the platform. Backman says that Zoho is also designing consciously with home work in mind, with APIs that allow users to set an “away,” “out of office” or “in a call” status that ripples through the other apps within Workplace.

Will you end up using Zoho? Probably not, unless your business signs up for the service. Still, trying to establish a leadership position as part of a new work-at-home mindset gives this spunky productivity company a new way to nip at the heels of the Google and Microsoft behemoths.