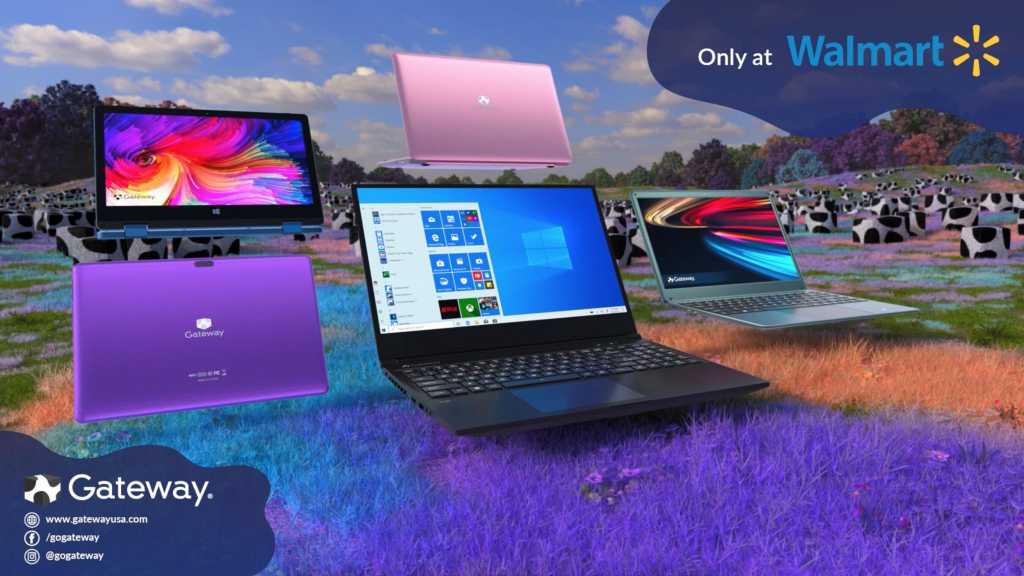 Gateway is back! One of the earliest American PC companies, Gateway may be most remembered for its black-and-white-spotted “cow” logo, a reference to the company’s start (as Gateway 2000) on a farm near Sioux City, Iowa, in 1985.

A lot has happened in the last 35 years. After Acer agreed to acquire the Gateway brand for $710 million in 2007, the company essentially went quiet.

In its new life, Gateway is a Walmart-exclusive, value-priced brand offering everything from an Android tablet to a gaming laptop. (Walmart also manufactures its own lineup of Motile laptops, which we’ve found to be surprisingly good.) It appears that the iconic “cow”-spotted boxes have returned, too.

PCWorld editors know a thing or two about how to shop for a “value-priced” laptop you won’t regret, so we took a quick look at the initial offerings on the Gateway product page on Walmart’s website.

The Gateway 11.6-inch Ultra Slim Notebook, $180 from Walmart.comRemove non-product link, has one great thing going for it other than the rock-bottom-price: the 1920×1080 (FHD) display resolution. You can find displays as big as 15.6-inch with that spec, so having it on one this small means images will be unusually crisp. Everything else about this laptop is modest to a fault: The memory and storage amounts are meager, and even the webcam is 480p instead of the predominant 720p.

We also noticed, on that Gateway laptop and a few others priced $369 and cheaper, that they all used the Windows 10 S operating system. This is the version that restricts you to apps available through the Windows Store. If your computing needs are modest (as they should be if you buy a laptop this inexpensive) you might not mind; but if you want to use any third-party applications, from antivirus to image- or video-editing, you can’t use them with Windows 10 S.

As you inch closer to $500, compromises start to fall away. The Gateway 14.1-inch FHD Ultra Slim Notebook ($479 at Walmart.comRemove non-product link) offers full-fledged Windows 10 Home, and a solid-performing Intel 10th-gen Core i5-1035G1 processor with a generous 16GB of RAM. The 256GB SSD is modestly sized, but you’ll likely feel the pinch only if you download games or save piles of videos and photos. The “1MP” webcam indicates a conventional 720p resolution. You even get a basic USB-C port (for data only, not charging) along with a legacy USB-A.

The most expensive laptop currently available is the Gateway Creator Series 15.6-inch FHD Performance Notebook ($999 at Walmart.comRemove non-product link). As the name suggests, these laptops are intended for graphics-intensive work and also gaming—Gateway even bundles a month’s free trial of Microsoft’s Xbox Game Pass for PC.

Gateway must have poured all its budget for this laptop into the GPU, a solid RTX 2060 with ray tracing and AI capabilities, because this supposedly “performance” model cuts some notable corners otherwise. It carries the Core i5-10300H processor, the respectable, but lowest-end member of Intel’s Comet Lake H CPUs for gaming. The 8GB of RAM and 256GB SSD are on the skimpy side for a power user. Also note that the 15.6-inch display offers just a 1920×1080 (FHD) resolution, which starts to look grainy on a screen of that size. You have an HDMI port to connect an external monitor, but there’s no Thunderbolt port for more advanced display and storage options (just a regular USB-C port for data and charging).

Laptops prices have risen steadily this year, so we applaud the arrival of a value brand. Just remember to pay attention to details like operating system, display, and memory and storage amounts when shopping for a cheap laptop. Gateway said more models would be coming to Walmart in the fall.