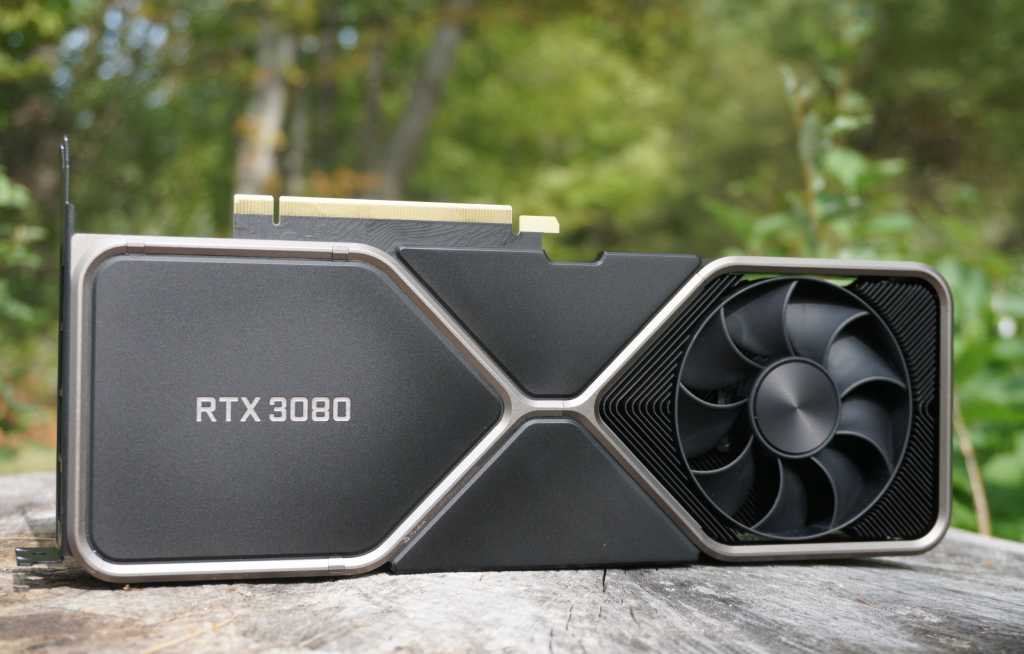 Nvidia’s Ampere-powered GeForce RTX 3080 chews up games and spits out frames for breakfast, as we covered in-depth in our comprehensive Nvidia GeForce RTX 3080 Founders Edition review. You need a pixel-packed monitor to get the most out of it, though—like a 3440×1440 ultrawide display.

Our initial tests of the GeForce RTX 3080 showed it really flexing its muscles at 4K resolution, where the graphics workload is so heavy that your CPU is pretty much taken out of the equation. At 4K, the RTX 3080 performed up to a whopping 80 percent faster than its RTX 2080 predecessor in some games. Stepping down to 1440p, the RTX 3080 continues to dominate, but not quite as much as at 4K, because at the lower resolution your CPU struggles to feed frames to the ultra-fast graphics card fast enough. A 3440×1440 ultrawide monitor splits the difference between the two more standard resolutions.

I’ve had the Nixeus display in my office since last winter, and while I haven’t had time to properly review it, it’s a wonderful value. The curved 3440×1440 ultrawide hits a blistering 144Hz and nails the fundamentals for an enticing $550 on Amazon, compared to higher-end ultrawide displays that can cost $800 or more. Sure, it lacks some extra goodies found in pricier options—the EDG34S comes in budget plastic casing with no adjustability features, and it lacks many software features—but if you’re just looking to game at a fast rate on an oh-so-immersive ultrawide screen, the Nixeus EDG34S screams. (Check out Hardware Unboxed’s deeper review if you want to know more.) 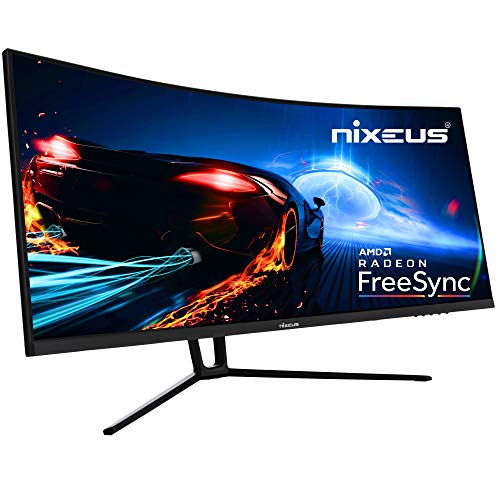 Officially, Nixeus has equipped this monitor only with AMD FreeSync Premium support formally. Don’t let that dissuade you though. While the EDG34S lacks official G-Sync Compatible certification, you can activate G-Sync manually in Nvidia’s control panel to turn on adaptive sync support for GeForce GPUs. I’ve confirmed it works like a charm. (You’ll need to use the monitor’s on-screen display to activate adaptive sync first, however.) That makes the Nixeus EDG34S a fantastic partner for a monstrous GeForce RTX 3080 if you’re planning to upgrade your display, too.

We benchmarked the GeForce RTX 3080’s ultrawide performance on the same system used for our primary GPU testing. Here’s the quick-hit info you need to know:

Each game is tested using its in-game benchmark at the highest possible graphics presets unless otherwise noted, with VSync, frame rate caps, real-time ray tracing or DLSS effects, and FreeSync/G-Sync disabled, along with any other vendor-specific technologies like FidelityFX. We’ve also enabled temporal anti-aliasing (TAA) to push these cards to their limits when it’s available.

We did not include the legendary GeForce GTX 1080 Ti, as our previous benchmarks show it performing on a par with the RTX 2080 in most games. It’s a hair slower in properly optimized DX12 or Vulkan games, as you’ll see in our full RTX 3080 review. Likewise, no AMD Radeon graphics cards have yet to match the RTX 2080’s performance, so you won’t find them in the charts below.

Hit up our full Nvidia GeForce RTX 3080 Founders Edition review for more information on our methodology and testing system. We’ll just present the raw graphs and game info before offering some wrap-up thoughts at the end. I had to remove two games from the suite due to wonky ultrawide support, which I’ll discuss at the end.

Yep, Sony exclusives are hitting the PC now. Horizon Zero Dawn hit Steam with some performance issues. The most egregious ones have by and large been cleared up thanks to hard work from the developers, and the game topped the sales charts for weeks after its release. It also seems to respond somewhat to PCIe 4.0 scaling, which will make this an interesting inclusion when we shift to a PCIe 4.0-based system in the future.

Gears Tactics puts it own brutal, fast-paced spin on the XCOM-like genre. This Unreal Engine 4-powered game was built from the ground up for DirectX 12. We love being able to work a tactics-style game into our benchmarking suite. Better yet, the game comes with a plethora of graphics options for PC snobs. More games should devote such loving care to explaining what flipping all these visual knobs mean.

You can’t use the presets to benchmark Gears Tactics, as it intelligently scales to work best on your installed hardware, meaning that “Ultra” on one graphics card can load different settings than “Ultra” on a weaker card. We manually set all options to their highest possible settings and disable frame rate minimums and maximums.

Fun fact: The GeForce RTX 3080 FE is the only graphics card that doesn’t generate a “Your GPU can’t handle this” warning when enabling Glossy Reflections. Only the 3080 and the RTX 2080 Ti lack that warning for Planar Reflections.

This DX11 game that isn’t really a visual barn-burner like the (somewhat wonky) Red Dead Redemption 2, but still tops the Steam charts day in and day out, so we deem it more worthy of testing. RDR2 will melt your graphics card, sure, but GTA V remains so popular years after launch that upgraded versions of it will be available on the next-generation consoles. That’s staying power.

We test Grand Theft Auto V with all options turned to Very High, all Advanced Graphics options except extended shadows enabled, and FXAA. GTA V runs on the RAGE engine and has received substantial updates since its initial launch.

After benchmarking the GeForce RTX 3080 Founders Edition at 3440×1440 in eight games, it winds up being roughly 50 to 70 percent faster than its direct predecessor, the GeForce RTX 2080. Nvidia’s new flagship also beats on the previous-gen $1,200 RTX 2080 Ti flagship by roughly 15 to 30 percent at ultrawide resolution, despite costing $500 less. The only exception is GTA V, but that’s because the GeForce RTX 3080 is so powerful it’s pushing the engine’s limits even at this lofty resolution. If you’re still using a GTX 1080, it’s a titanic upgrade.

Testing the GeForce RTX 3080 at 3440×1440 also reopened my eyes to the majesty of a high-refresh rate ultrawide display. My primary monitor is a 4K, 144Hz G-Sync display and it’s absolutely glorious, but benchmarking on the Nixeus EDG34S just felt immersive in a way that you can’t get on a standard panel. The wide-reaching screen engulfs your field of view in a delightful way, and the gentle curve that Nixeus used on the EDG34S only magnifies the effect.

That said, testing at this resolution also showed some of the rough edges present with ultrawide gaming. We had to nix Borderlands 3 and F1 2020 from our testing suite because neither game played well with this panel. Borderlands supports several ultrawide resolutions, but not 3440×1440. F1 2020, meanwhile, ostensibly includes a 3440×1440 setting, but I couldn’t make it stick. Selecting it made the game default to a 4K “3840×2160 (Custom)” resolution instead. It looks like proper ultrawide in-game, but the actual performance wound up actually being worse than what we saw at proper 4K for some reason.

Ultrawide monitors are gaining in popularity, but support can still be iffy for the relatively niche resolution. We’re heartened that 80 percent of our benchmarking suite worked just fine on the Nixeus EDG34S, however, and you can’t get an experience like this on even the finest standard displays—or on other graphics cards. 3440×1440 rocks with the GeForce RTX 3080.

Check out our full Nvidia GeForce RTX 3080 Founders Edition review for exhaustive info on Nvidia’s new flagship, or our guide to 5 key things you need to know about the RTX 3080 if you don’t feel like sifting through endless graphs and technicalese. Give the $550 Nixeus EDG34S a serious look if you’re planning on upgrading to 144Hz 3440×1440 to go with it, but don’t want to spend more on your monitor than your graphics card. And finally, hit up the PC Gaming Wiki or the Widescreen Gaming Forum if you need help coaxing troublesome ultrawide games into working. They’re utterly invaluable resources.