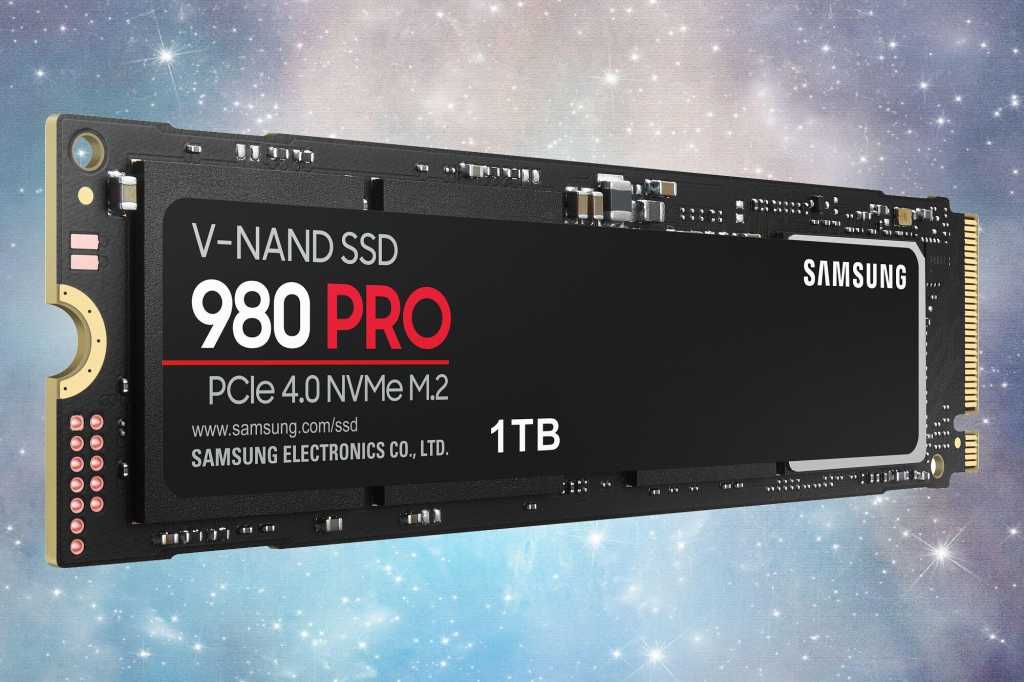 The Samsung 980 Pro is the NVMe SSD you want–if you’re rocking PCIe 4 (Ryzen-exclusive as of this writing). For more common PCIe 3-equipped systems, it’s still a great drive, but not significantly better than the lower-priced competition.

The Samsung 980 Pro is here to take back the crown—and then some. While its predecessor, the 970 Pro, won and eventually lost its SSD performance title to hotter competition, this latest generation buries them all.

Of course, to witness the greatness, you’ll need a computer with the PCIe 4.0 device interface, which currently means late-generation AMD Ryzen. With PCIe 3.0, the 980 Pro is still excellent, but merely on a par with the top competition.

The controller is a Samsung in-house Elpis design. The NAND is Samsung’s TLC V-NAND, which the company refers to as 3-bit MLC. Samsung informed me that there are “1xx” layers in the NAND. What the heck that means, I can’t tell you, but with 40 percent more capacity it likely means there are around 128 layers.

Those sticker prices place the Samsung 980 Pro in the upper tier of NVMe SSDs by cost per gigabyte. In short, it’s expensive. The drives carry a five-year limited warranty. The limit is 150TBW per 256GB of capacity rating. TBW stands for TeraBytes Written over the life of the drive.

That rating is a bit low for a premium-priced drive. Still, it represents 41GB written per day over 10 years—a lot more data than the average user will write (reads don’t count). A large part of the logic behind tying warranties to TBW ratings is to discourage enterprise use of cheaper consumer SSDs.

The 980 Pro more than lived up to Samsung’s claims of 7GBps reading and 5GBps writing via PCIe 4, at least with CrystalDiskMark 6, which we use for comparison with a large body of previous testing. Real-life transfers can’t touch any of the synthetic results, as Windows has become a rather large bottleneck in performance, but the 980 Pro still aced them.

Normally, we don’t post screen grabs of tests, but this one is worth a gander. The numbers turned in by the Samsung 980 Pro are impressive indeed. Note that the numbers are from a 1TB version of the 980 Pro. Samsung also sent a 256GB model, which posted approximately the same numbers.

I’ve compared the 980 Pro to the other PCIe 4 NVMe SSD we’ve tested—the Phison 16-based Seagate FireCuda 520. While the 980 Pro cleaned its clock in terms of sustained throughput, the FireCuda 520 actually bested the 980 Pro in several random 4K tests which are not shown. Not by a lot, but enough to mention it.

The real-world 48GB transfer results below are also very impressive, and make the 980 Pro the first PCIe 4 drive we’ve tested to exhibit a real world advantage in sustained transfers. Here the FireCuda 520 was no match.

Okay, now for a quick dose of reality. If you throw enough data at the 980 Pro, write speeds will drop from 2.25GBps to around 1.75GBps. We noticed this on the 450GB copy shown below.

If you happen to catch the drive while it’s doing housekeeping, or there’s not enough NAND left (if the drive is nearing full) to assign some as secondary cache, write speeds can drop as low as 350MBps.

I saw this once while testing the 256GB model. It transpired after several 48GB transfers, followed almost immediately by a TRIM operation, and then another 48GB single file copy. It never happened under normal use.

The PCIe 4 testing was done on an MSI MEG X570 motherboard socketing an AMD Ryzen 7 3700X 8-core CPU and using the same Kingston DDR and software.

A no-brainer if you’re PCIe 4, not so much with PCIe 3

The Samsung 980 Pro is a great NVMe SSD—the fastest we’ve ever tested using the PCIe 4.0 bus. If you’re lucky or smart enough to own a late-gen Ryzen system, it’s the one you want.

With PCIe 3.0, you’re unlikely to notice the difference between the 980 Pro and drives costing half as much, of which there are now quite a few. Throw in the low TBW rating, and it’s not the best deal, especially for 4K or 8K editing workload, which can involve a lot of data. Then again, you’ll be future-proofed for PCIe 4 when you update your PC. It’s your call on that one.