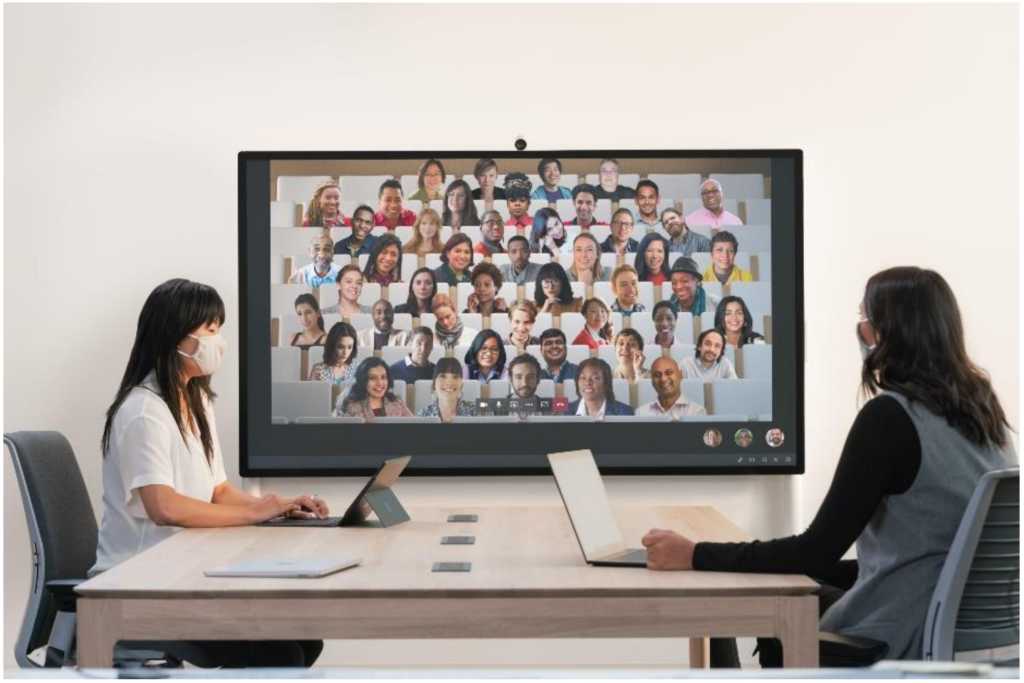 Microsoft said Tuesday that the delayed 85-inch version of its new Surface Hub 2S is now available for pre-order, running either the Windows 10 Team OS or a more traditional option to use Windows 10 Pro or Windows 10 Enterprise.

Microsoft launched the 50-inch version of the Surface Hub 2 last year for $9,000, and said then that the 85-inch version would be available in early 2020. That timetable may have been put on hold by the pandemic, or by Microsoft’s shifting attitudes toward a conference-room display in a world where conference rooms are still largely virtual affairs. Microsoft said Tuesday at its Microsoft Ignite conference that the 85-inch Surface Hub 2S would cost $21,999.

Microsoft also separately announced what it’s calling “Microsoft Teams panels,” which Microsoft said is part of a new category of devices that can be mounted outside of a meeting space to notify participants of scheduling and occupancy and to assist with wayfinding around the office. They can work with cameras that support people-counting to show what the room’s occupancy rate is. A Microsoft representative saidthe Surface Hub 2 and Teams panels are unrelated, though their Teams certifications allow them to talk to one another.

“As many parts of the world move back to the office or plan for new hybrid and satellite work environments, Surface Hub will be there to ease that transition–even with new considerations in space planning like the need for social distancing,” Robin Seiler, the corporate vice president of Microsoft Devices, said in a blog post released during Microsoft Ignite, the company’s conference now being held virtually.

Microsoft said the 85-inch Surface Hub 2S includes screen bezels which are 45 percent smaller, a display that is 20 percent thinner, and a slimmer weight, too–overall 30 percent lighter than its predecessor. It includes an 8th-generation Core chip like the earlier Surface Hub 2S, which launched in April 2019 and included 8GB of RAM, a 128GB SSD, and a UHD Graphics 620 GPU, according to Microsoft’s specifications page.

New to the Surface Hub 2S is the choice between Windows 10 Pro/Enterprise and the Windows 10 Team 2020 Update, the more traditional, purpose-built version of Windows for a collaborative environment. Microsoft recently installed the Windows 10 upgrade option as a way to enjoy a personalized experience that’s the equivalent to that of PCs, including browser favorites that can be synced to other PCs as well as the Start menu and taskbar.

“We’re excited about how this new configuration can help our customers be more collaborative during a time when personal connection is more important than ever,” Seiler said in a statement. Windows 10 users will also receive exclusive use of the Surface Hub 2 fingerprint reader, the company added.

As the name suggests, the free Windows 10 Team 2020 Update is oriented around Microsoft Teams, with a list of new features that makes Teams the default collaboration app. The new Team 2020 Update provides single sign-on capabilities, support for the new Microsoft Edge browser, and even collaboration with Microsoft Teams Room devices, which can be used as a secondary display. Inking has improved, with support for two Surface pens inking simultaneously.

Updated at 11:02 AM with updated Surface Hub 2S specifications.