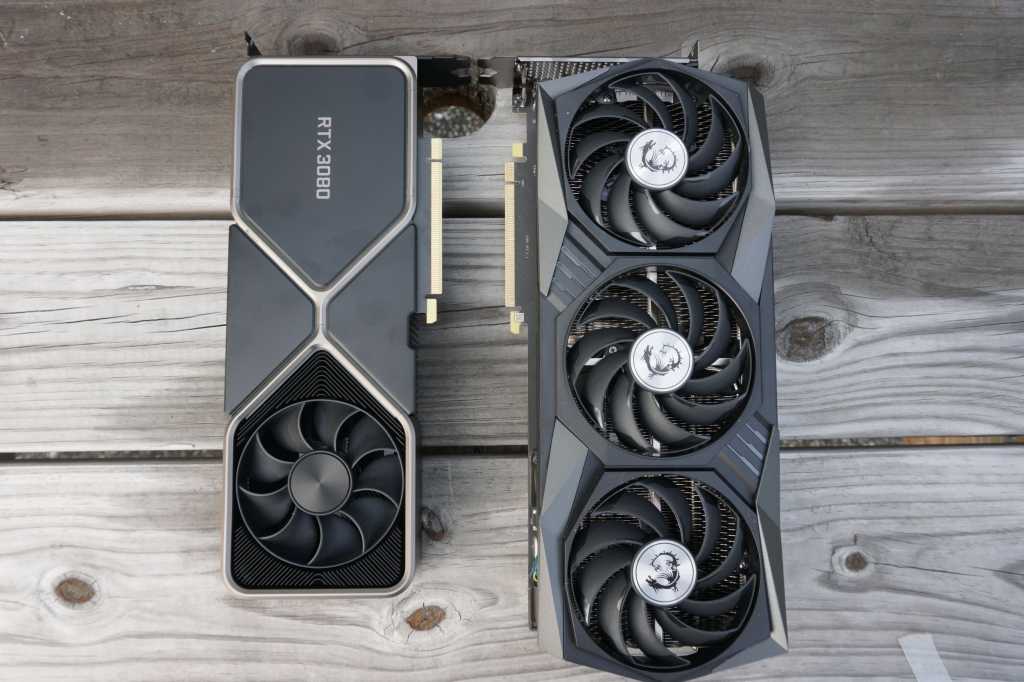 What a month. After the uneven ebb of product announcements through spring and summer, companies let loose in September. It’s a lot to take in, so we’ve pared down the highlights to the best of the bunch. We’ve also included a few products that launched this month—you’ll want to act fast since shortages are a real thing these days.

The last 30 days saw a torrent of announcements, leaks that turned into official reveals, products launching without prior notice—and even announcements of upcoming announcements. (Yes, that happened.) The biggest news of course was Nvidia’s new RTX 30-series graphics cards, followed closely by AMD’s reveal of its upcoming Zen 3 and Radeon 6000-series…announcements? launches?…in October.

After many months of rumors and supposed leaks, Nvidia took the wraps off its next generation of graphics cards, the RTX 30-series. These GPUs pick up exactly where gamers wanted, bringing whopping gains in traditional and ray-tracing performance; they also come with a laundry list of design overhauls (including a never-before-seen 12-pin power connector) and new features like RTX IO (similar to the ultra-fast storage in next-gen consoles) and Nvidia Reflex (which reduces click-to-display latency).

Our extensive coverage of the flagship RTX 3080 and the ultra top-tier RTX 3090 provides the details—including a comparison against the previous generation RTX 20-series cards, benchmark results (ultrawide monitors included!), and even tests of Nvidia’s fix for recent crashing issues. The third card announced, the RTX 3070, comes out in just a couple of weeks, so stay tuned. There’s definitely more info to come.

The first Samsung Galaxy Fold certainly drew a lot of attention, but by the time it hit store shelves, other phones, such as the Galaxy Note 10+ and iPhone 11 Pro, had thundered in to steal the show. Samsung remains devoted to the concept of a folding phone though, unveiling a Galaxy Z Fold 2 early in September with upgraded specs that include 5G support, a 6.2-inch HD+ Super AMOLED outer display, a 7.6-inch QXGA+ AMOLED inner display, a Snapdragon 865+ processor, 12GB RAM, and a triple rear camera. (And perhaps most importantly, the revisions included a sturdier hinge.)

The one issue with Galaxy Z Fold 2 may be its price tag: At $2,000, its unusual design seems overpriced for what you get, especially since much of its utility diminishes while we’re all stuck at home.

Slipped in amid the high-profile product announcements at the very start of September was a new AIO liquid CPU cooler from Be Quiet, the German company known for its noise-minimizing power supplies, coolers, fans, and cases. The Pure Loop comes in four sizes equipped with up to three Pure Wings 2 fans, and all models sport a nickel-coated cold plate compatible with liquid metal thermal paste. Those specs alone are enough to catch the eye of an enthusiast builder, but one additional feature makes it particularly stand out—the Pure Loop is user serviceable. A refill port and the inclusion of extra coolant allows you to top it off years down the road if needed, in order to extend its service in your system.

Technically, this entry belongs in the launch section of this article, as these laptop processors were announced this summer—but the actual devices you’ll buy didn’t get publicized until this month. The fight between AMD and its buzz-worthy 4000-series mobile processors and Intel is heating up, as the latter company looks unwilling to cede its position in the lucrative notebook market without a fierce fight. Early benchmarks indicate that Intel gains an edge in integrated graphics while still hanging on to its usual lead in lightly threaded tasks.

You’ll find these chips in laptops of varying prices when they begin to launch in October, from all the major vendors, be it Acer’s more budget $700 Swift 3 or Asus’s luxurious ZenBook laptops with OLED displays and DisplayHDR 500 support (prices TBA). MSI  even has a Tiger Lake gaming laptop in the works with an RTX 2060 and a PCIe 4.0 SSD.

One downside to Tiger Lake is the complexity in the options and, more notably, the freedom that laptop manufacturers have in configuring these processors’ clock speeds. Two laptops with the same chip might perform very differently, making actual reviews much more necessary when researching laptops to buy.

Though Tiger Lake laptops dominated the news that came out of IFA 2020, one Qualcomm-based model made the rounds, too. The Arm version of Acer’s Spin 7 sports a Snapdragon 8cx Gen 2 5G chip, allowing the company to tout 5G connectivity and multi-day battery life as headlining features. How this 2-in-1 laptop will perform is the big question, as Arm processors haven’t kept up with Intel and AMD’s x86 chips and suffer from compatibility problems with some software—we’ll have to wait for an answer, as Acer has yet to release info on the Spin 7’s price and launch date.

’Twas the month for leaks that turned out to be real. Microsoft had its thunder stolen when the internet began to confirm the existence of a second, cheaper next-gen Xbox—along with a November 10 release date and prices for both upcoming Xbox consoles. The $300 Xbox Series S targets 1440p gameplay and drops the Blu-Ray disc drive, while the more powerful Xbox Series X will cost $500. These models still share the same custom 3.6GHz AMD CPU.

The company responded by officially releasing the information, as well as announcing a September 22 date for pre-orders. Not to be outdone, Sony shared a November 12 release date and pricing information for the PlayStation 5 in a press conference soon after, with pre-orders for the $400 discless “Digital Edition” model and $500 standard version haphazardly rolling out among retailers early to the official September 17 date. Currently, all next-gen console pre-orders are sold out across stores, with fresh waves of pre-orders cropping up periodically.

In a move that some would file under “dubious new trends,” AMD announced in early September that it would reveal its upcoming RDNA 2 GPUs on October 28. (You read that correctly: AMD announced when it would make its official announcement.)

Speculation abounds over what “Big Navi” will deliver—so far, only a handful of confirmed info exists for the next generation of Radeon graphics cards. Ray-tracing support, DirectX 12 Ultimate compliance, and a shift to an axial cooler design are among those scant details, but how else AMD plans to compete with Nvidia’s RTX 30-series remains a mystery.

(In the meantime, word is that AMD added red trim to the new cards, and boy, does the internet hate it. Bets are on if AMD updates the look based on the community feedback between now and the end of October.)

Also up on deck from AMD are its Zen 3 processors, which the company at last confirmed as arriving this year on October 8. The news flattened speculation about the launch being delayed until 2021, though it remains unclear if we’ll see a true launch on the 8th or an announcement with full details on the lineup and expected performance. (With previous generations, reviews and the chips themselves became available on the announced date—but between the general weirdness of 2020 and AMD’s announcement plans for its upcoming Radeon cards, we’re not sure if tradition will hold.)

As good as today’s hybrid smartwatches and fitness trackers are, Apple often sets the bar for features in its wearables. It upped the ante yet again with the launch of new Apple Watch models this month—in particular, the Series 6’s Blood O2 sensor provides far more detailed information than the one found in Fitbit’s watches.

Other standouts in Apple’s first batch of fall launches was the addition of an affordable Apple Watch SE to the wearable lineup, which mixes together some of the best features from the past and present, and Apple Fitness+, a $10/mo virtual workout subscription launching in late 2020 that’s cheaper than popular competitors.

Another month, another SSD released into the wild. Samsung’s latest falls in line with its reputation for fast, dependable drives, with the 980 Pro receiving a positive reception among reviewers. Our own testing showed a leap to the top of performance charts: Over PCIe 4.0, you can see as much as 7GBps read and 5GBps write speeds, and even over PCIe 3.0, this SSD hangs with the cream of the crop.

The 980 Pro’s one drawback for some folks is its name—or its TLC nand, depending on your perspective. Previously, the Pro line made use of MLC nand, which historically has delivered better speed and endurance; TLC nand went into the more affordable EVO line. We don’t believe this switch diminishes the 980 Pro, but it has caused hesitation among picky buyers.

Buy a Ghost Canon NUC, and you’ll still have to source a few parts on your own. The Gaia eliminates even that work, as this XPG-branded version of Intel’s extreme NUCs comes completely outfitted with 32GB DDR4-3200 and an XPG SX8200 Pro SSD. Well, eventually they will. When the Gaia first arrives at the end of October, the $1,199 Core i7-9750H and $1,499 Core i9-9980HK will be bare-bones kits, just like Intel’s; the difference is a slight lower price. The ready-to-go versions will follow at the end of November, with prices still yet to be shared.

Announced last month, Fitbit’s new Sense tracker (along with the revamped Inspire 2 and Versa 3) sport a mix of new features and improvements to better help us track our fitness while navigating the complexities of working out from home.

For those who have to share a TV with others, Microsoft has enabled remote Xbox streaming on Android, giving you more options for in-home game streaming from your Xbox One console. Previously, you could only stream to a Windows 10 PC.

Looking for a mid-tower case, only to find one with a great interior layout but an exterior design that doesn’t match your build’s priorities? Corsair’s new 4000 series cases may smooth over that problem with three variations that share the same chassis but have different front panels.

Corsair also launched a new version of its H100i AIO liquid CPU cooler with its ultra-bright capellix LEDs. Available in 240mm, 280mm, 360mm sizes, this cooler is the one to get for matching perfectly with Corsair’s Capellix-infused RAM.

Slowly but surely, Elgato continues to push into new areas for streaming equipment, this time tackling a cornerstone piece of equipment among beauty YouTubers: the ring light. Elgato’s version outputs at up to 2500 lumens, supports color temperatures between 2900-7000K, and ties into the company’s Control Center software.