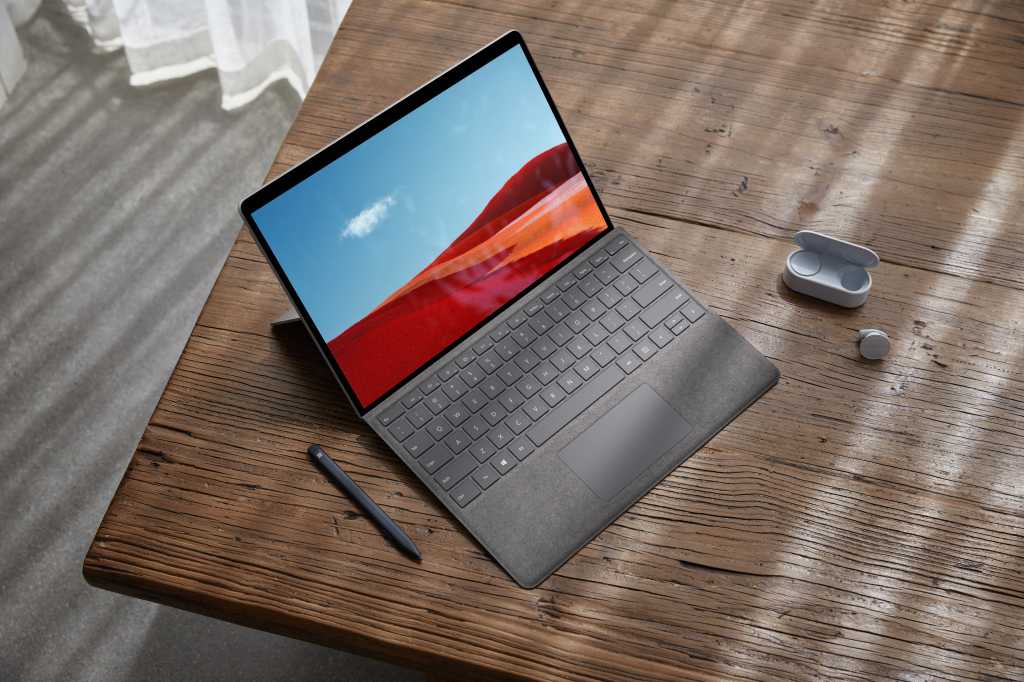 Microsoft is taking the unusual step of refreshing its existing Surface Pro X tablet lineup by adding premium options built upon a second-generation Microsoft SQ2 Arm processor. In addition, Microsoft has reworked some of its key applications, delivering more performance and longer battery life on Windows on Arm.

Microsoft’s SQ2 will be featured in the new, high-end Surface Pro X options, announced Thursday, which will be priced at up to $1,799 and be available starting October 13. Besides the new CPU, there are no significant changes to the Surface Pro X design, save for new cosmetic options: a new Platinum finish, and three new Surface Pro X Signature Keyboards in Platinum, Ice Blue, and Poppy Red.

Microsoft’s nifty, rechargeable Surface Slim Pen, which resides within the Signature Keyboard’s cubby, will still be sold separately. The Slim Pen and the Surface Pro X Signature KeyboardRemove non-product link are currently bundled together for $193 at the Microsoft Store, a $77 discount.

Microsoft debuted the Surface Pro X less than a year ago, significantly revamping the Surface tablet hardware with additional USB-C ports and the rechargeable pen cubby.  But as our Surface Pro X review showed, it failed to deliver even a working day’s worth of battery life, in addition to the usual compatibility challenges Microsoft’s SQ1 Arm chip brought with it.

Fortunately, Microsoft continues to make progress on both fronts. We know that the Microsoft SQ2 is based on Qualcomm’s Snapdragon 8cx Gen 2 5G, a 7W chip that Qualcomm believes will trounce a 15W 10th-gen Intel Core i5 by 39 percent. Microsoft likely upclocked the SQ2 in the same way that its SQ1 was essentially an upclocked Snapdragon 8cx, with SQ1 speeds reportedly reaching 3GHz. (Officially, Microsoft isn’t saying how fast the SQ2 runs.)

Historically, however, processors like the SQ1 have faced another hurdle: compatibility. By now, it’s a familiar story for anyone who’s followed Windows on Arm: Arm processors and devices like the Surface Pro X can run 32-bit and 64-bit Arm code natively. Code written for traditional PCs that runs in 32-bit X86 mode can be interpreted by Arm processors, but with a performance penalty.

The vast majority of traditional PCs can also run 64-bit code written for X86 chips. Currently, however, this code doesn’t run on Arm chips at all. This incompatibility remains a significant weakness for Windows-on-Arm PCs.

Microsoft said Wednesday that it’s solving that particular problem, announcing plans to release code to allow 64-bit X86 apps to be emulated by Windows on Arm beginning in November. That code will be distributed to members of Microsoft’s Windows Insider beta program first. Running 64-bit X86 apps on top of Arm would still introduce a performance hit, however, and Microsoft’s answer to that has been to work to develop more optimized versions of popular apps specifically written for the Arm architecture.

Those applications apparently include a long-awaited version of Google Chrome written on top of Arm64, as well as the existing, optimized versions of the Firefox browser and WhatsApp. Microsoft also said that it’s continued to work with its Edge browser to optimize it for Arm processors, and announced plans for a version of Microsoft Teams specifically coded for Arm. Visual Studio has been optimized for Windows on Arm. All told, “thousands” of existing Windows apps now run on Surface Pro X, either natively or via emulation.

Via these changes in software, Microsoft is now saying that the Surface Pro X will deliver up to a theoretical 15 hours of battery life “across all configurations.” The Surface Pro X, by comparison, lasted anywhere from six hours to a bit over eight hours in our original tests.

Totally unrelated to Microsoft’s 64-bit development work, but still noteworthy, is Eye Contact, a technology Microsoft developed that taps Qualcomm’s AI capabilities. Eye Contact uses machine intelligence to alter your image during a video call, making it look like you’re always looking at the camera—and your audience—even when you’re really looking at their face upon the screen.

A smaller but still-significant change Microsoft has made has to do with connectivity. Recall our recent Lenovo Flex 5G review: This Qualcomm-based laptop included the older Snapdragon 8cx 5G chip, promising ultrafast 5G connectivity. The problem, of course, was simply finding 5G: Verizon’s zones are more hotspots than blanket coverage. Though the Qualcomm Snapdragon 8cx Gen 2 5G promises 5G connectivity, Microsoft is marketing the Surface Pro X with just LTE connectivity instead.

Will the Surface Pro X make a splash this time around? The challenges that currently face all mobile device makers is that we’re still largely stuck indoors, where mobility means walking from room to room. The revamped Surface Pro X nevertheless signals Microsoft’s continued commitment to Windows on Arm, and the company’s development firepower remains impressive.

Below, we’ve listed the basic features for the revamped Surface Pro X. Underneath, we’ve added the available configurations.

This story was updated at 9:37 AM with additional details.