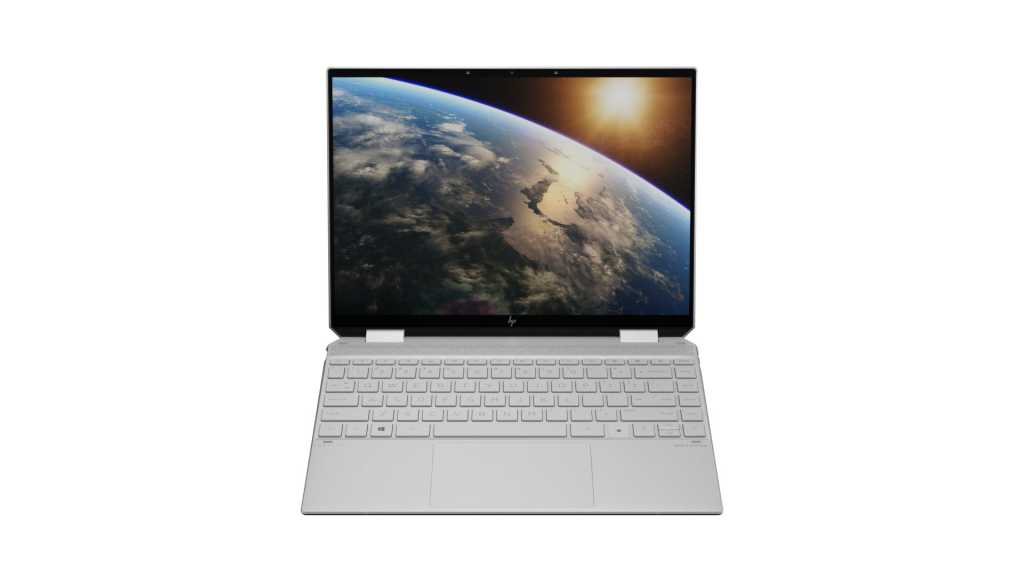 The HP Spectre x360 14 sounds like it’s barely any different than its 13-inch or 15-inch siblings, but there’s actually a world of difference because of the screens. Announced Thursday night and due to ship in October for a starting price of $1,200, the Spectre x360 14’s 13.5-inch screen has a 3:2 aspect ratio. The ‘3:2’ refers to the height and width proportions of the display.

Even better, the Spectre x360 14’s panel is a gorgeous OLED with a resolution of 3000×2000. Because it’s OLED, which can essentially shut off each pixel for black content (a typical LCD can only try to block the light), it has a ridiculous contrast ratio of 1,000,000:1. That translates to deeper blacks and a crisper overall feel. It’s a touchscreen, of course, and its rated brightness is a fat 400 nits. It’s capable of hitting 100 percent of DCI-P3 color space

The laptop is powered by Intel’s new 11th gen Core i7-1165G7, which is impressively fast for most of the applications people use on a small laptop. Even better is the chip’s gaming performance, which you can read about in our preview.

The rest of the laptop specs include a hefty 16GB of RAM and Wi-Fi 6. For storage, HP offers an Optane hybrid drive that pairs 32GB of Intel’s spiffy Optane memory with a 1TB SSD. In actual use, the Optane memory drives are quite impressive,  though it doesn’t yet take advantage of the faster PCIe Gen 4 interface that Intel’s new 11th-gen Tiger Lake supports.

For ports HP includes two Thunderbolt 4, a 10Gbps USB-A, and analog audio. The laptop features a combination microSD reader that can also double as a Nano-SIM holder. If you’re wondering why a laptop that doesn’t list 4G or 5G support has the capability to support a Nano-SIM, so are we. HP didn’t comment on the spec, but it’s obvious that either this Spectre x360 14 or a future version will be able to support a cellular wide area network. Hmm.

Because it’s a convertible and can double as a tablet, HP includes pen support using Microsoft Pen Protocol 2.0. This is supposed to help solve some of the problems of someone wanting to, say, use a Microsoft Surface’s active stylus to write on an HP laptop. HP even includes one in the box that can recharge via USB-C, along with a sleeve to accommodate both laptop and pen.

Elsewhere, the laptop features a 65-watt-hour battery which the company said can run the laptop for 12 hours for video or give you up 10.5 hours for “mixed use.” Full biometric support means you can use Windows 10 Hello to authenticate with your face, or use your finger. If you’re the kind of person who worries about webcam spies, the Spectre x360 14 features a mechanical shutter that electronically slides in front of the camera lens at the push of a button.

HP is also making the new Spectre x360 smarter. The laptop can actually sense what applications you’re using and boost performance up or down based on need. Run Photoshop, and it ramps up in performance and fan noise—watch YouTube, and performance and fans ramp down. The laptop also makes use of sensor data to tell whether it’s on a table, where it can crank up the skin temperature of the laptop, or on your actual lap, where it has to keep its cool. This capability has been in laptops for some time, but it looks like HP will be far more aggressive in how it uses the information.

In another example of a smarter laptop, HP said it features a “focus mode” that will put open windows in the background in a darker mode, while the foreground application stay bright. This is supposed to help you “focus” on your work, but it also saves you battery life because darker windows use less power in an OLED. An open Excel spreadsheet in back with a bright white background would thus consume far less screen power when not your primary focus.

The laptop will also monitor what you do and correct color based on the application in use. Edit a photo, for example, and the laptop will switch the color space to Adobe RGB. Surf the web and it switches in the more common sRGB, while watching a movie will cue DCI-P3.

HP will also implement AI noise reduction, which will use the GNA hardware inside of the 11th gen Tiger Lake chip to figure out which background noise to remove.

One feature we’re looking forward to is the laptop’s ability to sense when it’s been put into a bag. The idea is to prevent the situation where you shut the laptop and pack it up without powering down. If the laptop continues to run at full speed it builds up excessive heat inside the bag.  The bag-sensing would turn off fans and lower performance.

HP said the Spectre x360 14 is expected to available this month from HP.com with a price starting at $1,200. Next month, HP said, you’ll also be able to buy it at BestBuy.com.