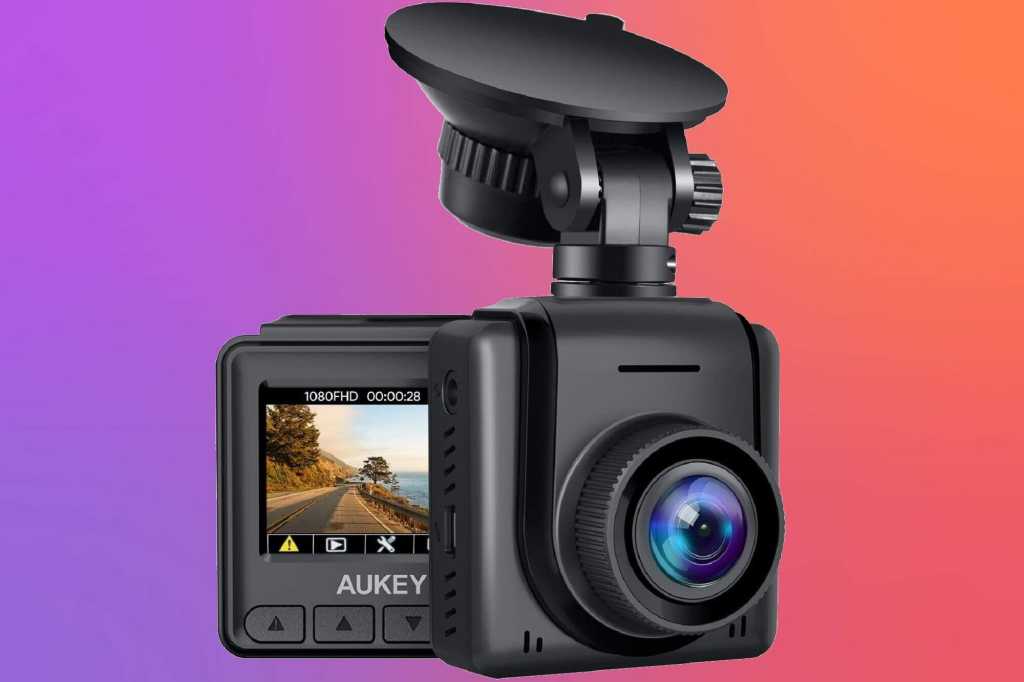 The Aukry Mini Dash Cam is small, light, capable, and surprisingly affordable. Sure, it has a few shortcomings, but for the price, it’s a very good dash cam deal, especially if this is your first one.

The Aukey Mini Dash Cam surprised me—in a good way. After testing it, and seeing how the 1080p Mini delivered good day and night video, with excellent stabilization, I was expecting a price along the lines of $65-$75. Then I found out it costs less than $50 (currently $44 on Amazon). You may be able to find other dash cams this inexpensive, but very few this good.

Small, diminutive, tiny… at approximately 1.75 inches wide, just shy of 2 inches tall, and about 1.35 inches deep from back to front, the Mini dash cam Aukey sent me is all that. It’s also superlight at only a couple of ounces, so it puts virtually no pressure on the mount.

Note that the images in this article don’t match exactly the unit I reviewed, which had a rectangular mount point and a semi-permanent sticky mount. These images are of the latest, shipping version, which features a suction mount. The sticky mount worked fine, and by past experience, I’m predicting the suction mount is fine as well.

Extras are sparse, though the Mini does support GPS via a $20 adapter. Other than the GPS port, there’s only the SD card slot and the mini-USB adapter for the auxiliary/cigarette lighter power adapter and cable.

The display is a 1.5-inch diagonal LCD. It’s clear, but honestly I recommend removing it from the windshield if you need to do anything serious with the settings. Younger eyes than mine can probably work with it already mounted. Below the display are four buttons for navigating the settings menu. There’s also a parking mode (to keep an eye on your car while you’re away from it), but that requires a hardwiring kit or OBD-II cable.

The sensor is a GC2053 CMOS type, and the camera delivers a 170-degree field of view. The video tops out at 1080p, which is plenty for legal purposes.

My biggest gripe, though mellowed by the low price, is the lack of an internal battery or capacitor. The camera shuts off immediately if power is removed. Though it is highly unlikely that this will happen in an accident, the Mini will only capture events prior to power interruption.

The Mini’s video isn’t up to what I’ve seen from some of the high-end dash cams, but for the price it’s pretty darn amazing. It’s a bit grainier and more prone to pixel flicker, but the color is rich, and there’s a lot of detail in both day and night captures. Headlight flare is minimal as well.

Note that these captures were taken during the September, 2020 California wildfires, so there’s a slight orange tinge that has nothing to do with the camera. Also, the stills obviously won’t display the flicker that video in motion will.

Motion stabilization was surprisingly good, with video over bumps exhibiting only the merest hint of screen tearing. I’ve seen worse from considerably pricier cameras of preceding generations. The latest sensors and processing seem to have cured this issue even in the low end.

Aukey didn’t send me the GPS module, but the company tells me the info is embedded in the video stream, but not watermarked. That is, you can see it with a GPS movie player, but it’s not visible on the video.

Given the price, there’s simply no reason to complain about the Aukey Mini’s video. It’s perfectly usable for legal purposes and shows just how far the baseline has jumped. It’s not the camera for travelogues, but hey, most cell phones easily fill that role these days.

Though it’s not in the same league as say a Nexar or Nextbase, the Aukey Mini is multiples cheaper, and just as effective with incidents to the front of your vehicle. It’s inconspicuous, delivers far better video than you’d expect for the price, and is a good choice for those who don’t want to make a major investment in the technology. Nice.