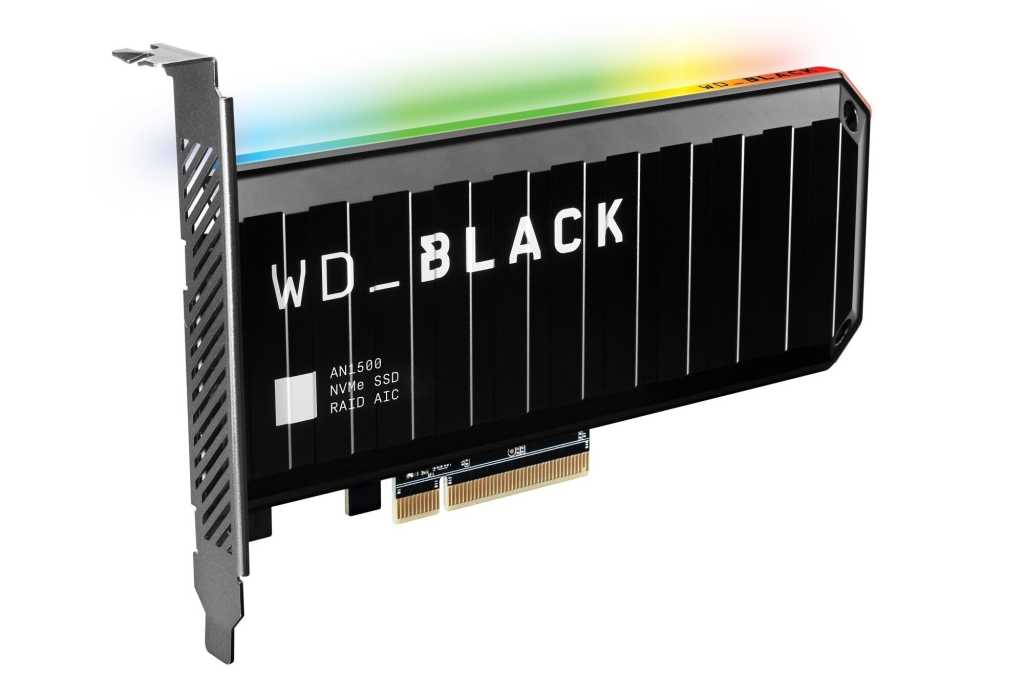 The WD AN1500 is nice looking, sports RGB lighting, and likely delivers enough performance boost with late-model CPUs for gamers with deep pockets. The average user can opt for something less expensive, such as WD’s new Black SN850 M.2 NVMe drive.

If you’re interested in a single 2.5-inch or M.2 SSD for upgrading your system or laptop, you can skip this article. The WD Black AN1500 reviewed here is a full-sized, x8 PCIe 3.0 card for use in gaming or creative PCs—with the goal of bringing near-PCIe 4.0 performance to PCIe 3.0 computers.

In synthetic benchmarks, it gets darn close with 6.5GBps reading and well over 4GBps writing. That could be good news for those that opted for Intel over AMD Ryzen in their gaming or video rigs, but read the performance section closely.

I led with the information that the AN1500 is an x8 (eight lane) PCIe card. It ships with a large heat spreader covering the entire board, sporting a ring of programmable RGB lighting around the edge. The RGB is compatible with all major standards and controllable via WD’s included app.

Beyond that, there are two SN750 M.2 SSDs on board configured in RAID 0. RAID 0 is a way of setting up multiple drives in a system and distributing, or “striping,” data evenly across all the drives in the array. In this case, with two drives, that means half the data is written to one drive, and half to the other. This is basically done simultaneously, hence the colossal uptick in both reading and writing. Twice the pipes, twice the chips, twice the sustained performance. Generally speaking.

While RAID 0 is very fast, it offers no redundancy. SSDs are extremely reliable these days, but two drives in RAID 0 effectively doubles your failure points. In practical terms, don’t rely on the AN1500 for storing irreplaceable data unless you back it up regularly.

A five-year warranty backs the drives, but there’s no TBW (TeraBytes Written—over the life of the drive) rating as you’ll find with single drives. However, the SN750 used inside is rated for 600TBW per terabyte of capacity. Bottom line, while you wouldn’t want to use an AN1500 as the tip of the storage spear in a high-transaction server, you needn’t worry about wearing it out during normal use.

The AN1500 performs as advertised, at least on synthetic benchmarks. Real-life 48GB transfers generally didn’t stack up to PCIe 4.0, though our PCIe 3.0 testbed (see below) is now quite a few generations older than our PCIe 4.0 testbed. Because of that, I also tested on the latter to see what the card could do with a modern CPU. Turns out, it made quite a bit of difference, as you’ll see below: PCIe 3.0 is the orange bars and PCIe 4.0 is the gold bars.

The AN1500 didn’t do particularly well in our 48GB transfer tests, falling slightly behind Samsung’s 980 Pro over PCIe 3.0. With a more modern AMD Ryzen 3700X over the PCIe 4 bus (still operating at PCIe 3.0 speeds), the story changed drastically. Note that these numbers are from two completely different testbeds and while indicative, are not directly or concretely comparable.

The 450GB write test below proves three things: The AN1500 is much faster writing large files on a Ryzen 7 3700X/PCIe 4.0 system than on a Core i7-5820/PCIe 3.0 system; it’s easily the fastest drive we’ve tested with the long write; and the 2TB version of the AN1500 I tested is unlikely to run out of cache during any operation.

Note this may change as the drive fills up, as with any SSD. You should allow for 25 percent free space when buying, just to make sure there’s always enough NAND for uses as secondary cache for long copies.

Note that our PCIe 4.0 testing is on AMD’s first-gen implementation, and there are no doubt improvements on the horizon.

The PCIe 4 testing was done on an MSI MEG X570 motherboard socketing an AMD Ryzen 7 3700X 8-core CPU and using the same Kingston DDR and software.

An expensive upgrade for the few

Faster is always better—less time wasted, more life tasted. The AN1500 delivers an improvement, though it’s not always subjectively apparent and is likely not be worth the extra cash for the average user.

Still, there is a boost, so for those with bleeding-edge needs and deep pockets it will deliver at least a modest performance boost over PCIe 3.0. It also looks nice in the case. A recent-vintage CPU will optimize the gains.

This article was edited several hours after publication to change the internal SSD from SN550 to SN750.