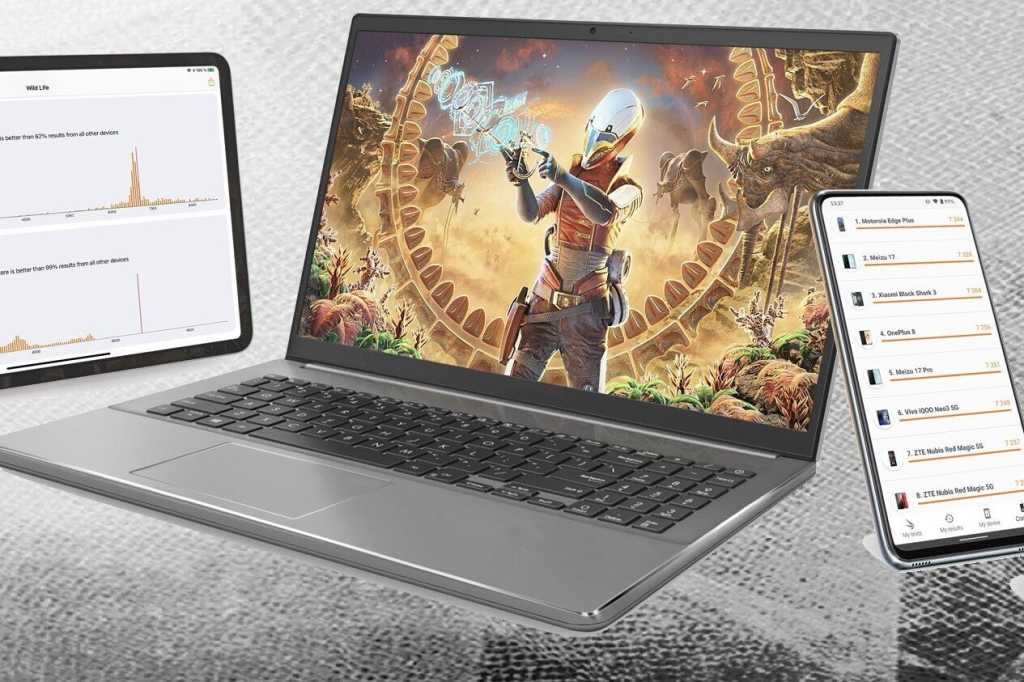 Now that Apple has announced a new iPhone, and the company is apparently planning to show off its Arm-based MacBooks mid-November, you can expect to see these clickbait headlines soon:

“iPhone 12 is faster than Intel-based MacBook.”

Of course, phone and laptop performance matter—but context matters, too. That’s why it’s important to understand how UL Futuremark’s new 3DMark Wild Life Benchmark works. Touted as cross-platform test, Wild Life can be run on Android, iOS and Windows. You can download it now to run on your phone or tablet for free. Windows users who have the Advanced Edition will get it as a free update from UL, Steam or the Green Man Gaming store.

To its credit, UL is quite open about what 3DMark Wild Life does, publishing details on the test and how to run it. It’s meant as a graphics test for “lightweight notebooks and tablets” on Windows, and it uses the Vulkan API. On Android it also runs on the Vulkan API, while the iOS version uses Apple’s Metal API.

The test has a standard mode that renders the game at 2560×1440 internally and then scales it to the display resolution. When looking at the whole device, UL recommends the standard run.

“The Wild Life graphics test consists of multiple scenes with variations in the amount of geometry, lights and post-processing effects. The backbone of the test is a deferred renderer with clustered light culling,” UL’s documentation reads. “The post-processing effects include bloom, heat distortion, volume illumination and depth of field.”

There’s more in UL’s documentation from the link above, but what you want are results of Wild Life Unlimited running across both Windows laptops and iPhone. While we don’t have the newest iPhone 12 to run it on with the A14 Bionic, we do have a number graced from our sibling, MacWorld.com. And yes, that’s an iPhone 11 Pro Max outpacing Intel’s UHD620 graphics, Intel’s Iris Plus graphics and even more impressive: AMD Radeon graphics in a Ryzen 7 4800U.

The benchmark chart above is enough for some to run to the Internet and pronounce that the “iPhone 11 Pro Max faster than even a Ryzen!”

So why is the iPhone 11 Pro Max with the A13 Bionic beating those PCs? To be honest, we wouldn’t be surprised to see Intel’s ancient UHD graphics being kicked around so easily. It long ago wore out its welcome. If Apple cited UHD alone as its reason for breaking up with Intel, we’d understand and probably offer Apple some chamomile tea as we kvetched about the split. “I understand dear, so dreadful.”

But Intel’s Iris Plus and the AMD Radeon? Basically tying with an iPhone?! Why?

The second reason is that Apple, like Sauron creating the One Ring, has poured untold resources and treasure into its Arm-based A-series of chips. It is no doubt legitimately fast, and you can bet Apple’s Metal performance is a priority, unlike Vulkan on Windows. It’s what you get when you own the API and the hardware—similar to what you see on game consoles.

Of course, responsible representation of results would include more context rather than just push out trolling headlines of “iPhone faster than PC!” So we also were fortunate enough to run the test on a production Asus ZenBook Flip with Intel’s new 11th-gen Tiger Lake Core i7-1165G7 inside.

That blue line on top, of course, is Intel’s Tiger Lake chip and Iris Xe. That Core i7-1167G7 in the thin-and-light Zenbook Flip isn’t the fastest there is, either. Notice how the narrative immediately flips from “iPhone faster than Ryzen and Ice Lake!” to “Intel Iris Xe offers 62 percent faster graphics than A13 Bionic!”

You should also realize that a synthetic test designed to measure graphics performance in a vacuum is not the same as real-world gaming, which gets messy by throwing CPU performance in to the mix.

Why cross-platform benchmarks are tricky

That’s the tricky part—when you try to apply cross-platform benchmark results, and theory crashes into real-world use.

For example, a higher score in 3DMark Wild Life for the new iPhone 12 won’t tell you how fast it can run Fortnite on iOS compared to a Samsung Galaxy Note 20 Android phone, or on a Lenovo Slim 7 Windows laptop. That’s because obviously, there is no official Fortnite on iOS or Android anymore. 3DMark Wild Life also won’t tell you how well you can run Steam games on iOS or Android, because you can’t.

You’re also likely to see Primate Lab’s Geekbench results applied on phone, tablet, and laptop, with headlines declaring X to be faster. How much will that Geekbench score matter if you can’t run a Windows app on your new Arm-based MacBook, or run a MacOS app on Windows? Not much.

Of more value than a screaming headline should be benchmarks of how fast that shiny new device runs the task, games or applications that you do—compared to the older device you currently have doing the same thing. An iPhone 12 vs. an iPhone 8 in Wild Life is useful. A Pixel 5 vs. a Note Ultra 20 in Wild Life’s is useful. It might even be useful to compare an Intel-based MacBook vs. an Arm-based MacBook in Wild Life’s, once the latter appears. I’d rather see both MacBooks running real tasks in Photoshop or Light Room, or Excel or Chrome, than Wild Life’s anyway.

Keep these differences in mind in the coming weeks and months, as tech sites pick through database results or run preliminary tests using cross-platform banchmarks and rush out screaming headlines declaring one a winner, and the other a loser. We know it’s a fun game to play, but it has its limits.

For example, in the chart below, the two topmost green bars indicate the results of Wild Life Unlimited running on two laptops with discrete GPUs. One is a 4-pound gaming laptop, and the other a 2.8-pound content-creation laptop.

Certainly, some will say this result is simply ridiculous, because you can’t compare a 4-pound gaming laptop against a phone. We agree—and think it’s just as silly to compare a phone with a 2.5-pound laptop, because you just don’t use them the same way.