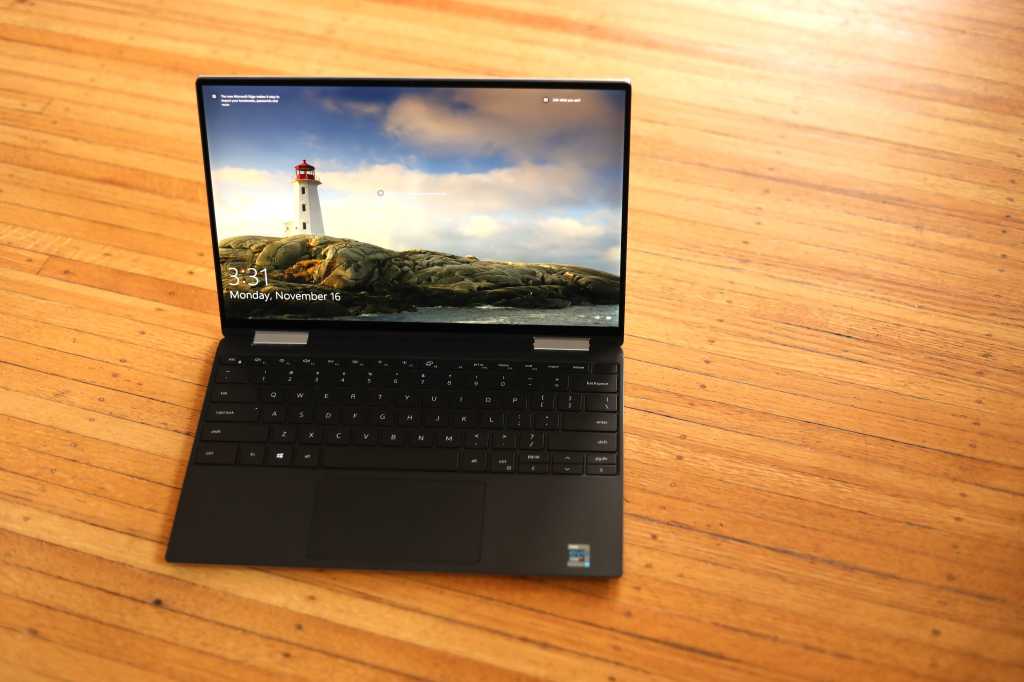 Most other things didn’t change, and we have our beefs about the design. But that game-ready performance boost alone makes the XPS 13 2-in-1 special.

Dell’s XPS 13 2-in-1 sets a standard for thin-and-light Windows laptops that’s hard to beat—with a price to match. The model we tested ($1,714 as configured from Dell.com) remains true to form. But there are drawbacks to laptops this small, which we’ll go into after we look at the specs.

We’ve complained about the non-upgradable SSD on this laptop in prior generations, and an equally disappointing design decision is the port selection. Dell controversially dumped the beloved rectangular USB-A port, and it never looked back. Pictures tell the story, and you can see on the left side of the laptop you get a single Thunderbolt 4 port with a microSD reader.

And no, there’s no USB-A on the right side either. Dell does give you a USB-A to USB-C dongle, but we can tell you that unless you chain it to the laptop, it will go missing right when you need it. Fortunately there is still an analog audio port, something you can’t count on now that Asus has eliminated the headset jack in its ZenBook Flip. Not that we’re upset about that.

The keyboard also remains the same, which is another consideration. While Dell’s implementation hasn’t proven to be as prone to breakage as another company’s (*cough* Apple *cough*), we’re not fans of low-travel keyboards for prolonged periods of typing.

This story, however, is mostly about Intel’s newest 11th-gen CPU built on a 10nm process. With four CPU cores with Hyper-Threading that hit a decent clock, plus Intel’s snappy Iris Xe graphics, it’s been a ray of sunshine for the company. Our full preview of Tiger Lake is here, but we’ve been wanting to see it implemented in a production laptop that aims a little higher on the performance scale. The XPS 13 2-in-1 is just such a machine, and it wrings a surprising amount out of Iris Xe—enough to make gaming credible on a thin-and-light laptop.

If you look down at the chart, the first takeaway is how much faster the XPS 13 9310 2-in-1 is compared to the only other production 11th-gen laptop we’ve seen: the Asus ZenBook Flip 13. Both laptops featuring the same CPU, but the XPS 13 2-in-1 9310 is about 17 percent faster on the default setting. Credit the advanced vapor chamber cooling inside of the XPS 13 2-in-1 and what Dell is willing to do with it. Some pick less heat on the shell, and some pick more noise.

We also interestingly see very little difference between the performance setting of the XPS and the default.

While vendors like to market multi-core CPUs and the press likes to hype it, the vast majority of applications and tasks that most people do on a small laptop use only a single core. Running Cinebench on just one thread, we can see both the Asus and Dell 11th-gen laptops leading the pack in essentially a tie.

While Cinebench can be considered a CPU sprint that tends to favor high clock speeds, the other side of CPU performance is how well it can weather a prolonged load—especially in thinner laptops that are harder to keep cool. We use an older version of the free HandBrake utility to convert a 30GB, 1080p movie using the Android Tablet preset. This task can drive the CPU hard for 20 minutes on an 8-core CPU, to 40 minutes on most quad-core CPUs—long enough to level off any short-boost advantage and focus on thermal stress over time.

We also see that while the performance setting of the Dell didn’t give us much on the much lighter workloads, on HandBrake letting the laptop run the fans louder helps quite a bit. We also again see the Dell easily outpace the Asus ZenBook Flip 13.

We should note that the fan noise on the XPS 13 2-in-1 wasn’t as pronounced during its HandBrake run as it was in some other laptops. Overall, the fancy vapor chambers in the XPS 13 2-in-1 9310 appear to help it achieve outstanding performance among the 11th-gen laptops in its weight and size class.

Our final test that leans more on the CPU is PCMark 8’s Work test. It’s a CPU-focused test that simulates mainstream productivity tasks. Most modern laptops far exceed the threshold for satisfactory performance on this test. That said, this is still a good showing for the XPS 13 2-in-1 9310, even if few people would be able to tell the difference.

We’ve typically recommended that someone looking for a gaming experience buy an actual gaming laptop, but the graphics cores in even ultra-light laptops have gotten drastically better with Intel’s 10th-gen Iris Plus, AMD’s Ryzen, and now the 11th-gen’s Iris Xe. The XPS 13 2-in-1 is actually capable of gaming at a moderate level we’d have thought impossible just a few years ago.

To demonstrate we start with UL’s FutureMark Sky Diver benchmark. It’s a synthetic test, but very reliable and repeatable. For proof of just how far Intel graphics have come, the Dell XPS 13 2-in-1 is essentially on top of the pile for integrated graphics.

One problem with synthetic tests is they aren’t as messy as real games and don’t always translate directly into particular titles, so we ran the XPS 13 2-in-1 through a few games. The comparable laptops are drawn from our 11th Gen Tiger Lake preview and feature a pair of 10th-gen XPS 13 laptops, a Ryzen 4000-based Lenovo, and an Intel reference laptop using its Core i7-1187G7 chip. The Dell XPS 13 2-in-1 9310 (in light blue below) in Far Cry: New Dawn does relatively well, with an average of 25 fps at 1920×1080 resolution, with the game set to its Normal preset. That’s enough to keep it just barely ahead of the Lenovo Slim 7 with its Ryzen 7 4800U.

We also ran Rise of the Tomb Raider in DX11 mode set to Very High and 1920×1080 resolution. Performance is again pretty fair, just slightly slower than the Lenovo Slim 7’s. The XPS 13 2-in-1 9310 should be able to play most older games at 1920×1080 resolution. Newer games will require turning down the resolution or game settings. It isn’t by any stretch a gaming laptop, but it’ll do for the most popular games.

The most important metric for some isn’t CPU performance but battery life. To test that, we loop a 4K video using Windows 10’s Movies & TV app, with the laptop set to Airplane mode and earbuds in plugged in. We set the screen brightness at a relatively bright 250 nits to 260 nits, which is a good brightness for watching a movie in an office with the lights on. The battery life is actually quite good, taking in excess of 14 hours to drain. That’s slightly more than the Lenovo Slim 7 but a good bit less than a pair of HP Spectre x360 laptops. The HP’s and the Lenovo both sport larger batteries, though.

Remember, too, that laptop are like your car: Your mileage will vary depending on how hard you drive it. If we’re seeing 14 hours in an easy video run-down, you might get half that browsing the web. Shave off another couple of hours if you’re doing something more CPU- or GPU-intensive. If you’re playing games, you probably shouldn’t expect more than three hours at best.

Dell’s XPS 13 2-in-1 has long been the standard against which to judge all other Intel-based laptops, with its fit and finish, and its swing-for-the-fences performance. Add the credible gaming chops shown here, and there’s a good chance the XPS 13 2-in-1 will hold the bar for being the fastest 13-inch convertible laptop using the Core i7-1165G7 chip. The waters are admittedly murkier now with Ryzen and even competitive Apple offerings, so we’ll have to see if the XPS 13 can hold onto its leading position.