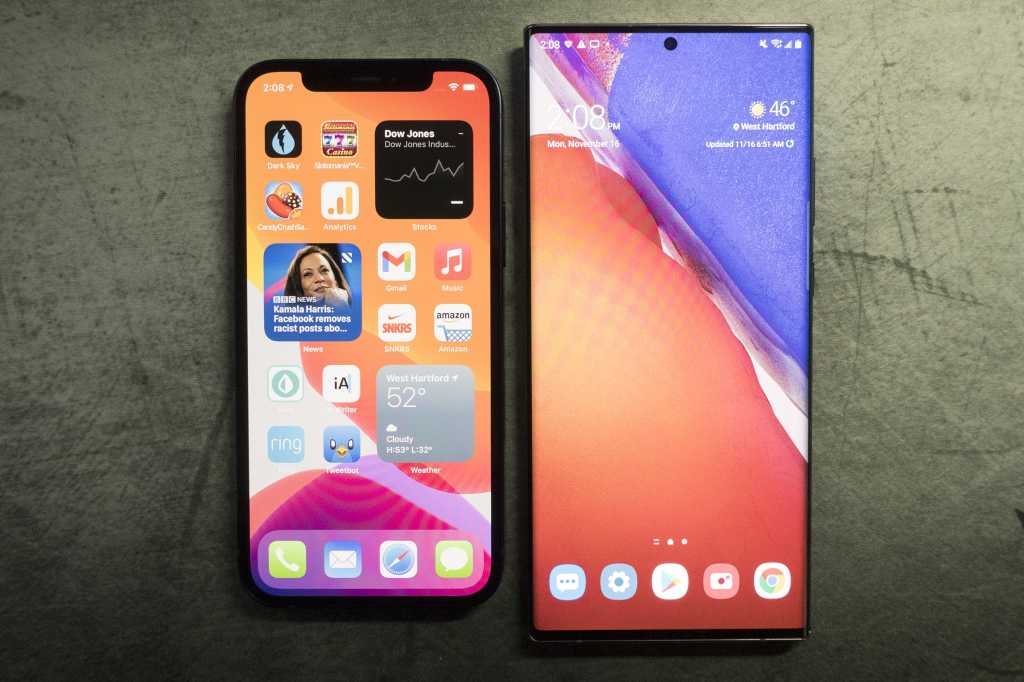 I don’t want to make this about Apple vs Android, but the fact of the matter is, we never needed displays with WQHD+ resolution. We simply wanted them–or rather, phone makers convinced us that we wanted them. Full HD displays have become relegated to budget Android phones as more emphasis is placed on immersive, edge-to-edge, pixel-packed experiences. You need look no further than DisplayMate’s iPhone 12 Pro Max OLED Display Shoot-Out to see how wrong that thinking is: The iPhone 12’s Full HD display received the highest-ever A+ display performance grade.

But all those extra pixels just aren’t necessary. Case in point: Samsung ships with its QuadHD+ resolution turned off by default. I’m willing to bet many people who buy one don’t even know how to turn it on. Super-high-resolution displays are nice on spec sheets and in macro testing, but on a six-inch display, the results are basically indiscernible to the human eye. If the jaw-dropping Infinity display on the Galaxy S8 had maxed out at 1080p, no one would have complained.

Android enthusiasts may claim they can tell the difference, but I doubt they would be able to pick a 1440p display out of a 1080p lineup. I should know; I was one of them. There was a time when the first thing I did when I got a new Samsung Galaxy phone in for testing was bump the resolution from 1080p to 1440p. I would have challenged anyone that my eyes could tell the difference.

They can’t. When Samsung launched its first phone with a 120Hz refresh rate earlier this year, I was among the reviewers who criticized it for not working with the higher-resolution setting. I was so convinced that WQHD+ was the superior setting that I questioned whether the 120Hz refresh rate was worth downgrading to a lower resolution.

It is, and Samsung is smart to limit 120Hz to 1080p. Even without a fast refresh rate, 1080p screens provide 400-450 pixels per inch, well above what Apple’s Steve Jobs called the “magic number right around 300 pixels per inch, that when you hold something around…10 to 12 inches away from your eyes, is the limit of the human retina to differentiate the pixels.”

For a while there, it looked like phone companies were going to start competing in the 4K space, starting with the Sony Xperia 1, which had a whopping 3840×1644 resolution and 643ppi pixel density. While Sony has continued to trot out ridiculously high-res screens–with a rumored 5K, 900ppi model in the works—overly high-res screens haven’t really caught on.

That’s a good thing. While 2K, 3K, and 4K are great for spec sheets and marketing copy, the extra pixels are, for the most part, unnecessary and even detrimental to the overall experience. High-resolution displays use more battery, tax GPUs, and occasionally, disrupt app layout and performance. They deliver few benefits beyond the perception that images and fonts look crisper. In short, 4K is great on a TV, but wholly unnecessary on a phone.

The same goes for 2K and 3K. On paper, Apple’s iPhone 12 displays are pedestrian compared to those on most premium Android phones. But specs don’t tell the story. Apple takes such care with the calibration of its displays to make them visually indistinguishable from the excellent WQHD displays on Galaxy phones and light years better than Google’s 1440p Pixel phones. Now that Apple has finally gone full-OLED with its iPhone lineup, there’s very little left to criticize, apart from the lack of a 120Hz option. Rumors suggest that will come next year, which will put the iPhone on a par with Samsung’s best, even with significantly lower resolution.

Apple cares more about display quality than pixel quantity, and it’s willing to yield a bit to its competitors to get there. In doing so it’s proved that we don’t actually need resolution better than 1080p. I’m hoping other phone makers will stop trying so hard and follow Apple’s example instead.