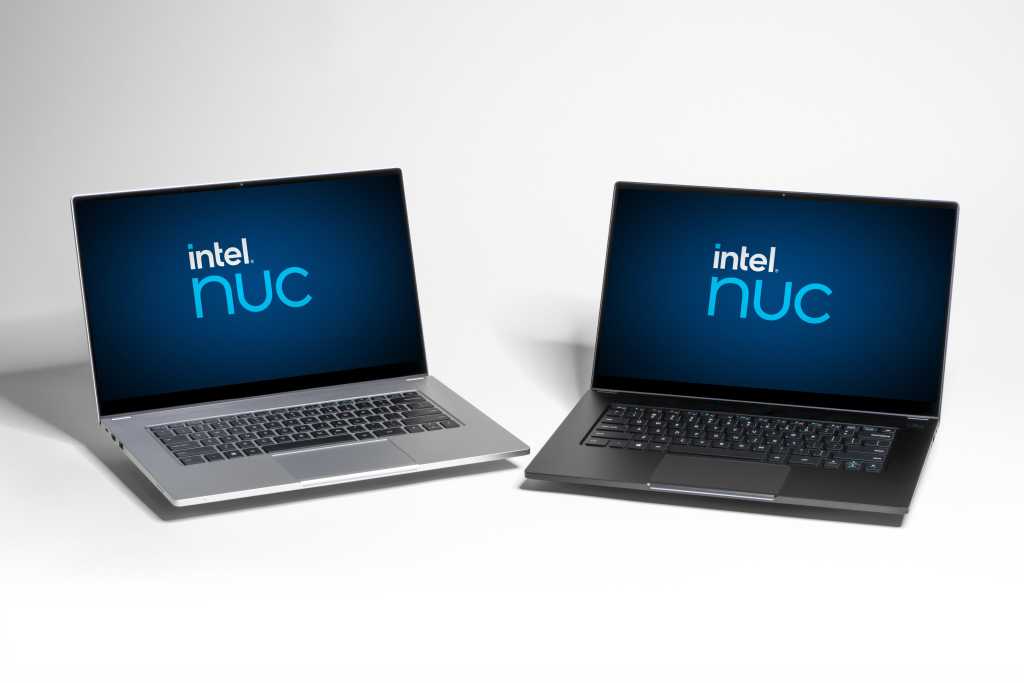 We’ve come a long way from Intel’s original Next Unit of Computing modular computer that brought tiny computing to the mainstream. We’ve come so far, in fact, we’re not sure what’s actually “NUC-y” about Intel’s new NUC M15 laptop, which is intended as a “whitebook” design that other notebook makers can utilize for their own products.

Intel unveiled its in-house-designed laptop yesterday with a list of specs that is simultaneously welcome and somewhat confusing. The NUC M15 comes with either an 11th gen Core i5-1135G7 or Core i7-1165G7 processor, paired with either 8GB or 16GB of LPDDR4X RAM. For ports, you get two USB-A and two Thunderbolt 4, plus a full-size HDMI port, lock port, and headset jack.

We welcome the inclusion of two old school USB-A ports, but their presence should tell you about the body of the laptop. It’s a striking CNC-milled aluminum “unibody” shell with appealing right angles everywhere. In many ways, its looks to us like a bigger version of Google’s original Chromebook Pixel.

Intel takes advantage of the large body by fitting in a pretty massive 73-Watt-hour battery, which the company says is good for 16 hours of video playback. However, it also adds to the weight: All that aluminum, battery, and screen results in a hefty 3.5-pound package, “only” a half-pound heavier than a Dell XPS 13—but also “only” a half-pound lighter than Intel’s previous in-house laptop design, which we reviewed under the given name of XPG Xenia 15.

The Intel/XPG laptop impressed us. Sure, the software may not have been as polished as what you’d find in an Alienware, Asus or MSI gaming laptop, but it really packed in the performance at a reasonable price. And by reasonable, these won’t be fire-sale laptops—expect the premium body and features to cost from $1,000 to $1,500 for the NUC M15.

Just why is Intel doing this?

Because it was designed by Intel (and built by laptop maker Tongfang), the XPG Xenia 15 also made some intelligent choices to not sacrifice performance at the altar of thinness. In some ways, that’s what Intel may be trying do overall to with its “Whitebook” program. With these Whitebook kits, Intel is basically footing the bill for most of the expensive design work of making a laptop, and then letting smaller vendors add their own flourishes before selling them under their own banners.

Putting a 15- to 28-watt CPU into a 15.6-inch laptop is, perhaps, Intel’s effort to show what its Tiger Lake chips can do when they aren’t constrained by thermals. While very impressive overall, Intel’s 11th-gen sings the loudest when it’s given a little more power to consume and a little more room to get hot.

Of course, what Intel wants to show off doesn’t always align with what laptop makers want to sell. Performance isn’t always the end goal, either, as manufacturers balance engineering, time, budget, and what marketers believe their customers want to pay for.

For instance, with the Whitebook program and the NUC M15, Intel can implement features such as its nifty presence detection technology, which lets your laptop wake up when you come near it. That’s a feature a PC maker might skip, however, because it would mean throwing more resources at a feature its customers may not want.

With Intel promising a ton of new features when it rolls out its Xe Max GPU—-which can work very closely with Intel’s CPUs—we’d guess the NUC M15 is a way for Intel to get those features out and in consumers’ hands rather than wait for OEMs to do it.

While Intel, XPG, and a host of other partners declined to confirm that the XPG was a 95-percent-Intel laptop, that shyness seems to be gone with the NUC 15, which might be a good thing. A consumer looking at putting down $1,500 for a notebook from a small PC shop might be worried about just how good the warranty is from a company that isn’t one of the big names. The NUC M15 will be backed up by a two-year warranty from the biggest name in PCs: Intel. We’d guess much of the support for drivers and BIOS/UEFI updates will also flow from Intel, another good thing.

Of course, you’re probably still wondering where exactly is the “NUC” in all this. After all, how do you get from a tiny, modular PC to this laptop?

Initially we thought the M15 was built around Intel’s radical NUC Compute Elements. That was proposed as a modular laptop built around a replaceable card. While not intended for consumers to upgrade, a notebook built around the technology would have let small PC makers buy a shell and quickly slip in a Compute Elements card that contained the RAM, storage, Wi-Fi, chipset and CPU. All this would connect via a cartridge-like edge connector to the ports, screen, keyboard, and antennas in the body. For NUC enthusiasts, that’s probably a lot more, well, “NUC-y” than the M15, but NUCs aren’t what they used to be either.

Just what is a NUC, anyway?

The original NUC (Next Unit of Computing) started out as a mini-PC that consumers could finish with their own storage and RAM. Intel also originally envisioned different top-plate configurations that could add NFC functionality or additional storage.

The Hades Canyon NUC was far faster, but far less modular (unless you wanted to swap out the top with the skull on it). With its Ghost Canyon NUCs, Intel seemed to lean back to its original intent, leaving questions about what the basic element of computing actually is.

In the end, maybe being a NUC just means being something really cool—throwing transistors at the wall and seeing what sticks.