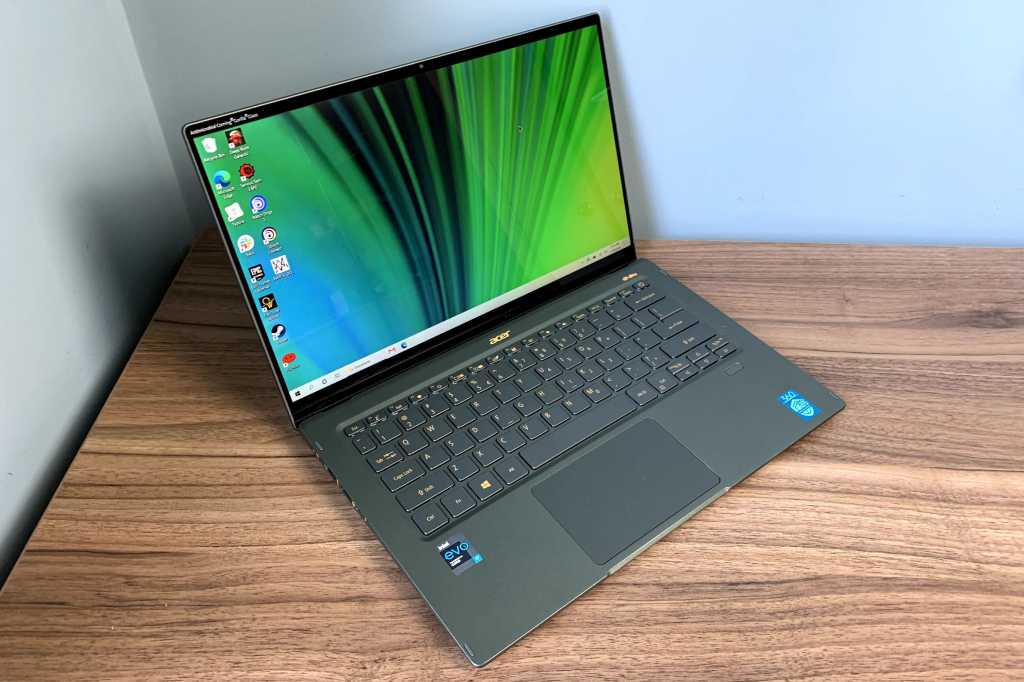 The Acer Swift 5 is thin, light, and fast enough to play Fortnite, showing off Intel’s 11th-gen Tiger Lake and Iris Xe graphics at their best. It gets stellar battery life too. The sound quality is the biggest disappointment.

Now that Apple’s M1 chip has raised the bar for lightweight laptop performance, there’s a question every ultraportable PC maker must address: Why would someone buy this instead of a MacBook Air?

Well, here’s an answer for the new Acer Swift 5: It’s fast enough to play Fortnite and a bunch of other games that are absent from Apple’s platform, but it still weighs only 2.3 pounds and gets stellar battery life for work or web browsing. It also has a touchscreen and a bunch of useful ports, including HDMI out and USB-A, none of which you’ll find on Apple’s thin-and-light.

That’s not to say it’s any cheaper. With a starting price of $1,000 (and $1,300 on Amazon for our review unit), the Acer Swift 5 is very much a premium ultraportable PC. But with no huge flaws and lots of upsides, it’s well worth putting on your short list.

Although you’ll still find lots of laptops with 10th-generation Intel processors in late 2020, the Swift 5 is among the first with an 11th-generation chip. The main attraction is vastly improved integrated Iris Xe graphics for gaming. It also boasts Intel’s “Evo” branding, which highlights laptops that get nine hours of “real-world” battery life at 1080p resolution and can charge to four hours of usage in 30 minutes.

One caveat, though: While the Swift 5 can draw a charge over USB-C, you’ll need to use Acer’s included barrel charger to get the best gaming performance. Even with a 65W USB-C charger, the Swift 5 delivered much slower framerates for 3D graphics. While we’re used to proprietary chargers for workhorse gaming laptops, needing one for an ultraportable is a bummer.

Like a lot of other extremely light laptops, the Acer Swift 5 uses a magnesium alloy chassis instead of standard aluminum to keep its weight down. Still, the laptop feels sturdy, with little noticeable flex on or around the keyboard.

Acer also deserves some credit for its inspired color choices. Instead of the usual dull grays, our review unit came in a subtle green hue (with less-subtle gold accents on the keys and hinge). Acer also plans to sell a “safari gold” option. The surface has an unusual fine-grained texture as well, and Acer says it’s applied an antimicrobial coating that you won’t have to wipe down as often.

Slick design also extends to the Swift 5’s display, which has extra-slim borders around its 1080p touchscreen. The Corning Gorilla Glass branding at the top-left corner is a little tacky, but at least you know it can withstand an errant scratch or two. Acer uses a drop hinge that dips about a half-inch below the laptop’s frame when the screen is fully unfolded, propping up the keyboard at an angle as you type.

As for the display itself, it offers a peak brightness of 350 nits, which is just a little above average at a time when we’re seeing premium laptops with 500-nit panels and Dolby Vision HDR. To my eye, it also doesn’t offer quite enough contrast out of the box, necessitating a few tweaks in Intel’s Graphics Command Center software. It’s not a bad display overall, but we expected better from a laptop at this price point.

Although it only weighs 2.31 pounds, the Acer Swift 5 is thick enough to have room for a solid keyboard. There’s a teeny bit of wobble around the edges of each key, but they give off a satisfying bump and have a decent amount of travel. The laptop’s sturdy chassis keeps the keys from feeling mushy when pressed all the way down.

The sole nitpick here is with the Swift 5’s number-lock key, which turns the right side of the keyboard into a number pad when pressed. It’s could be a handy feature for the Excel wizards among us, but because the number lock key has no indicator light, some folks might get tripped up if they press it by accident.

The trackpad, meanwhile, is typical of what you’d find on most premium Windows laptops: The surface feels super-smooth under your fingers, but the clicking mechanism is on the stiff side, especially as you move further up the trackpad. Microsoft’s Precision Touchpad drivers are on board, supporting gestures such as three-finger swipes to show the desktop or task view, three-finger taps to search, and four-finger swipes to move between desktops.

The Acer Swift 5 webcam is average. Despite Acer’s boast of “super high dynamic range” on its webcam, it’s still just blurry, grainy 720p camera that turns shadowy images into indistinct blobs. Unlike many other high-end laptops these days, the Swift 5 offers no privacy shutter or keyboard switch for its camera and microphones.

The Swift 5 does have a fingerprint reader, though, and while the shape is unusual—it’s rectangular, not square like most Windows laptops—it seems accurate enough and can almost instantly wake the PC from standby.

The useless buzzwords also apply on the audio front, where Acer boasts of “TrueHarmony” technology for “headphone-like” audio along with DTS Audio for optimized bass response. In reality, the speakers are terrible: They produce almost no bass whatsoever and fail to muster enough volume to compete in loud environments.

A note about bloatware

While we’re griping, Acer’s pre-loaded software is just slightly more annoying than average for a Windows PC. Beyond the usual bundled antivirus (in this case, from Norton), Acer includes a bunch of programs that nag you with notifications over time, including Dropbox, Firefox, and Acer’s own JumpStart software (which uses its notifications to advertise games).

All this can be removed, of course, but getting nagged when you’re trying to work is not a positive experience and doesn’t help the software companies involved.

With all that out of the way, we get to the heart of the matter: The Acer Swift 5, despite its size and weight, is a remarkably mighty laptop, with vast gains in performance and battery life over last year’s model.

Let’s jump right into our HandBrake benchmark, which tests multi-core performance over time by encoding a large video file. Intel’s 11th-generation “Tiger Lake” processor yields some major performance gains over the previous generation—compare the new Swift 5, for instance, to its predecessor from late 2019—and edges out Dell’s convertible XPS 2-in-1, which has the same Core i7-1165G7 CPU.

The results were even more favorable in Cinebench, which tests a CPU’s ability to handle quick bursts of activity. We’re used to seeing small, ultralight laptops hover around the 600-800 range for the multi-threaded version of this test and fall below 200 for the single-thread test, but that’s starting to change with Tiger Lake. Again, the Acer Swift 5 turned in better scores than Dell’s XPS 2-in-1 with the same chip.

Given the above results, it’s no surprise that the Swift 5 also did well in PCMark 8’s Work 2.0 benchmark, which simulates a gamut of productivity tasks such as spreadsheet editing, video chatting, and web browsing. While most premium laptops can handle these tasks without issue, it’s nice to see the Swift 5 land a clear step ahead of laptops with older processors. Anecdotally, the machine feels pretty speedy.

The real stunner, though, is gaming performance. Sure, we already knew Intel’s integrated Iris Xe graphics was supposed to provide a big leap forward, but witnessing it in the real world is another matter. In 3DMark’s Sky Diver benchmark, the Swift 5 handily outperforms a laptop with Nvidia’s entry-level GeForce MX350 graphics and crushes laptops with Intel’s older Iris Plus integrated graphics. While Nvidia’s GTX 1650 is still a step ahead, the comparison is closer than you might think.

In actual use, this means you can comfortably achieve smooth framerates in Fortnite at 1080p with medium graphics settings. If you’re willing to make further sacrifices, you might be able to eke out a playable experience in more demanding games. I was able to play Watch Dogs 2, for instance, at 720p and a stable 30 frames per second on medium settings, despite Ubisoft’s warnings that my graphics card did not meet minimum requirements. For a 2.3-pound laptop with integrated graphics, that’s impressive.

Bear in mind, that performance doesn’t kill battery life, which is typically the case with laptops that have discrete graphics cards. In our video rundown test, the Swift 5 lasted for 13 hours and 9 minutes, behind Dell’s XPS 2-in-1 but nearly five hours longer than last year’s Swift 5. While its predecessor couldn’t get through a full work day, I had no problems doing so on the new version, bolstering Intel’s claims of nine-hour “real-world” battery life for laptops bearing the “Evo” label.

Like any computer, the Acer Swift 5 has its weaknesses. There are laptops with richer, brighter displays, and laptops with better audio quality. The lack of a webcam privacy shutter also seems out of touch with current premium laptop trends, even if it’s not an essential feature. The bold color choices and use of lightweight magnesium might turn off a few folks given the $1,000-and-up price tag.

But if you can look past those quibbles, the Swift 5 is a fun little laptop, one that you can easily carry around, that lasts for hours on end, and that you can plug in at the end of the day to enjoy a bounty of games that only the Windows ecosystem provides. At a purely gut level, I’ve really enjoyed having it around. While it may not be an M1-powered MacBook, it raises the bar in its own way.