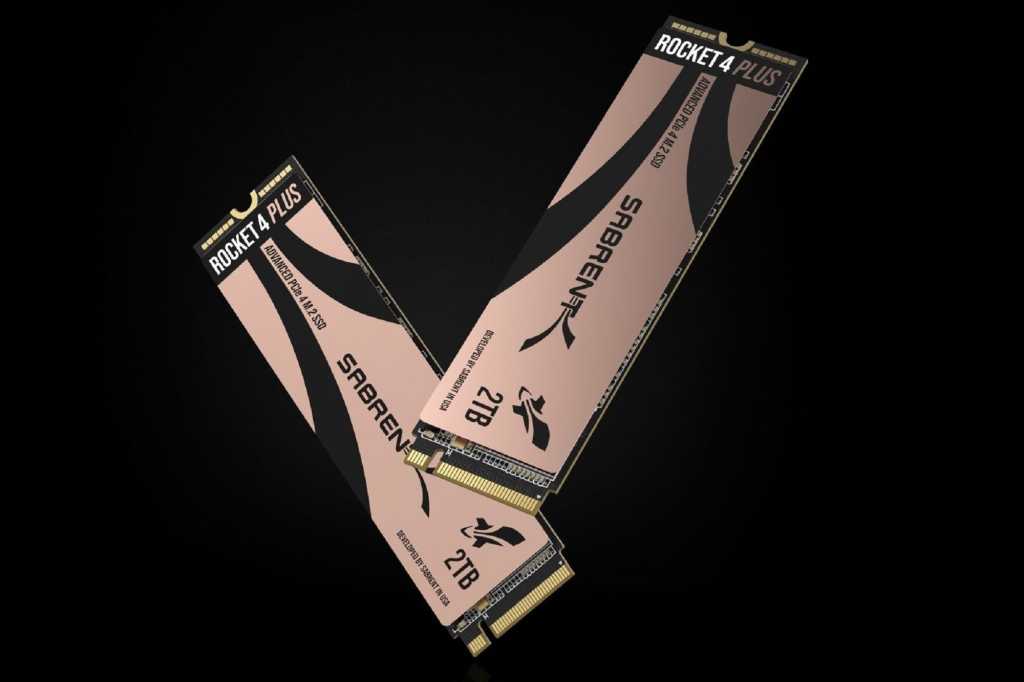 This drive is a worthy competitor to Samsung’s 980 Pro, at least in the 2TB version. The 1TB will run out of juice on very long writes, something the 980 Pro won’t do. Regardless, for the price, an excellent SSD.

Sabrent must’ve read some of my articles and discovered my love of the color copper. The heat-spreader and the metal carrying case for the brand spanking new Rocket 4 Plus PCIe 4 NMVe SSD feature the color in copious amounts. I like it. Even if copper leaves you flat, the drive’s stellar performance will grab your attention—it bested the Samsung 980 Pro in many tests. This is one of the best SSDs around.

Editor’s note: This review originally published on December 21, 2020. As of late January 2022, Sabrent has upgraded the NAND in the Rocket 4 Plus to Micron’s B47, which has increased its sustained throughput substantially in our follow-up testing in March. As of this addendum, it’s the sixth fastest NVMe SSD we’ve tested under CrystalDiskMark, and the second fastest drive in our 48GB transfer tests, up from 8th place.

The NVMe SSDs we review all use the M.2 connector, and are 22 mm wide by 80 mm long (2280). The Rocket 4 Plus is an x4 PCIe 4.0 device featuring a Phison PS5018-E18 controller and 96-layer, Micron TLC NAND. Sabrent promises not to change to slower components, as has happened with a couple of SSD vendors recently. There’s also 2MB of DRAM cache. NAND is treated as SLC for secondary caching to the tune of 25 percent.

The drives carry a 5-year warranty, and are rated for 350TBW per 500GB of capacity. TBW is the number or terabytes that may be written before the drive warranty lapses. It’s quite likely capable of writing more, but that’s the company’s cut-off point for replacement. Most users are unlikely to come close to that in a decade.

All that coppery goodness would mean nothing if the Rocket 4 Plus didn’t haul the freight. The 2TB version I tested delivers. The Rocket 4 Plus’s CrystalDiskMark 6 sustained throughput numbers are impressive indeed, trading first place between writing and reading with the Samsung 980 Pro.

The Rocket 4 Plus couldn’t quite match the 980 Pro’s overall real world performance in our 48GB transfer tests, but it took a solid second place.

Where the 2TB Rocket 4 Plus really rocked was in our 450GB sustained write tests. Note however, that the 980 Pro Samsung sent me was only a 1TB model. Though it’s not shown in the charts, the 1TB version dropped to around 675MBps (PCIe 3) at around the 350GB mark in the copy and took 386 seconds, compared to the 2TB version’s 250 seconds on PCIe 3 and 209 seconds over PCIe 4. Yes, cache makes a difference.

I should also mention that in general, it’s never a good idea to run an SSD close to capacity. Write speeds will slow down tremendously without NAND available as cache. Always overbuy in terms of capacity.

A nice buy at 2TB

Though there’s room for improvement in small- and 4K file performance, there’s little else to complain about with the Sabrent Rocket 4 Plus in its 2TB incarnation. That it can wrestle at all with the 980 Pro at this price point is a feather in Sabrent’s (and Phison’s) cap.