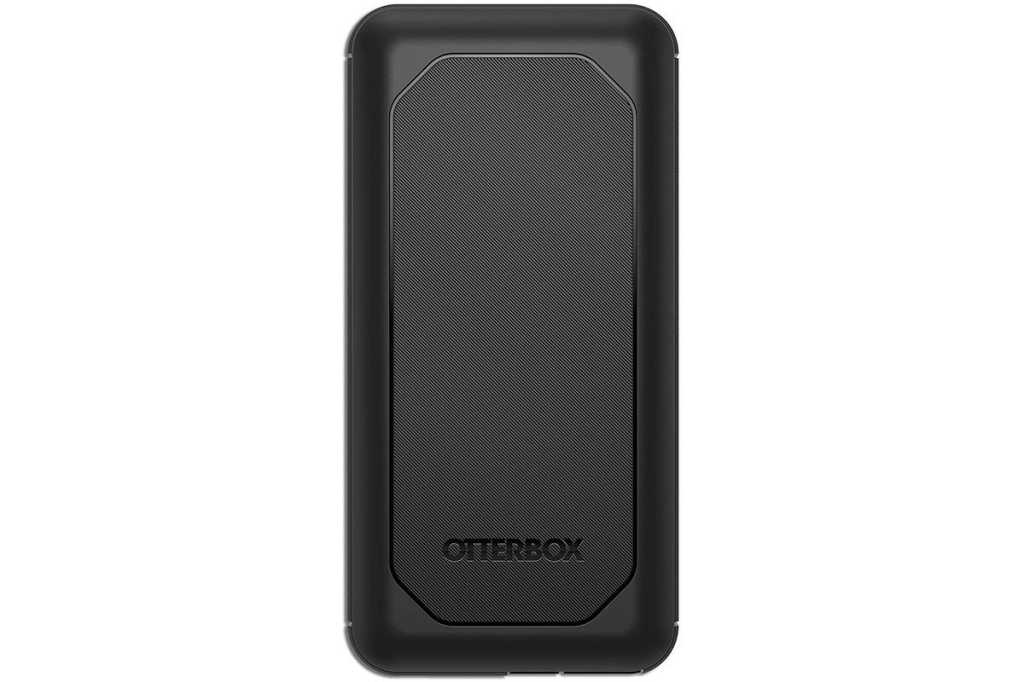 Image: OtterBox
At a Glance

The last time we took a look at an OttterBox battery pack, we were impressed, awarding the Fast Charge 20,000mAh 4.5/5 stars. For the past few weeks, we’ve been testing the $59.95 OtterBox Fast Charge Qi Wireless Power Bank Premium. It’s a long name, indeed. This pack boasts the type of rugged exterior we’re accustomed to seeing from OtterBox.

In a lot of ways, this power bank has shades of OtterBox’s Symmetry case line, or maybe its Defender. Either way, the rubber coating on the outside of the case is built to withstand drops from 2 meters. There are port covers that lock in place, concealing the standard USB-A port and USB-C port on the front edge of the pack. To the left of the ports you’ll find four indicator lights letting you know how much charge is left, as well as a power button.

For its size, Otterbox’s Fast Charge Qi Premium feels surprisingly light. Perhaps because a shell of this size typically holds a larger battery, while the Fast Charge Qi Premium’s battery has a 10,000mAh (37Wh) capacity. The top of the pack has some texture, adding some welcome grip. After all, this is where you’ll place your phone or any Qi-enabled device to wirelessly charge it from the pack’s internal batteries—you don’t want it slipping.

To activate the pack’s wireless charger, press the power button. Next, place a device, like your iPhone, on the pack and give it a second or two to start charging. The first indicator light turns green to let you know when the Qi pad is in use. It’ll charge at speeds up to 10W.

When you plug a device into the pack, it will begin charging unprompted—no need to press a power button to trigger it. It also does passthrough, meaning you can charge the pack and another device at the same time.

OtterBox makes it clear on the product page that this pack isn’t going to blow you away with support for multiple charging standards. As we do with all of our battery pack tests, we used the AVHzY USB Power Meter to verify the output of both ports on the Fast Charge Qi power bank. The USB-A port triggered Apple 2.4A, DCP 1.5A and Samsung 5V/2A. The USB-C port triggered DCP 1.5A, QC 3.0, QC 2.0, Samsung 9V and Huawei 9V charging standards. We also verified that the USB-C supports Power Delivery at up to 12V/1.5A.

In other words, if you want to charge something fast, you’ll want to use the USB-C port. That’s the same port that’s used to charge the pack itself, which took two hours and 36 minutes charging at 15W.

As for efficiency, with a total capacity of 37Wh, the Fast Charge Qi put out 31.81Wh, meaning it used 85.96 percent of its total capacity. That’s in the top third of the packs we’ve tested.

In addition to the battery pack itself, you’ll get a single USB-A to USB-C cable, which can be used to charge either the pack itself or a USB-C compatible device.