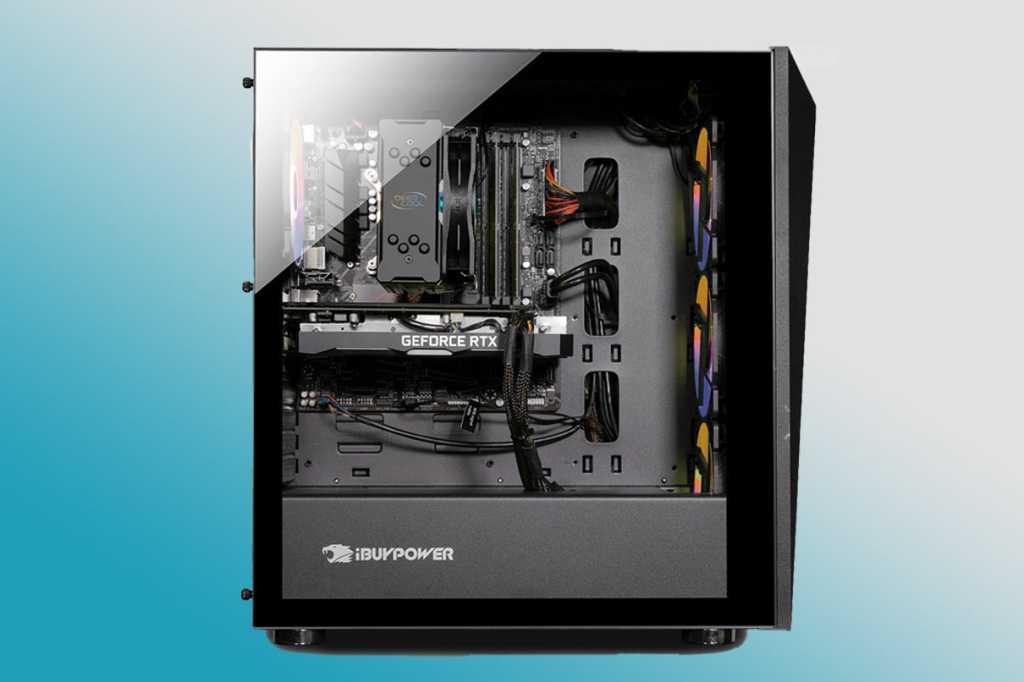 At the moment, stock for Nvidia’s RTX 30-series and AMD’s Radeon 6000 graphics cards disappears in seconds—when they’re even available for purchase. Same goes for AMD’s Ryzen 5000 processors. Most people who’ve tried to score one of these recently launched components have struck out, forcing them to wait out the next several months with a placeholder part, or making do with an older alternative.

Another option exists if you’re in the market for a whole new PC, however. Prebuilt desktop computers provide a compromise solution: They ship much sooner than supply will improve (likely spring 2021), and while you’ll pay a markup over MSRP, reasonable vendors impose minimal surcharges on the parts themselves.

Expect to pay $150+ more for a prebuilt PC over DIY, as these systems have the cost of marketing and labor folded in. (Between $150-$300 is what we’d call reasonable.) Price comparisons assume MSRP for the new RTX, Radeon, and Ryzen parts and are current as of December 2, 2020.

Below is a list of the best online shops to check out, with notes on what to expect from each. These vendors largely use off-the-shelf parts and let you truly customize the configurations, but we’ve also included those that at least allow some flexibility in CPU and GPU selections. Be warned: You’ll still need to pay close attention to your configuration to get the most for your money.

Note: Some of these stores still offer “Cyber Week” deals currently, which include free shipping and/or accessories like headsets or RGB keyboards.

Few other vendors match iBuyPower’s freedom of choice—its configurator doesn’t skimp. You get nearly the full range of processors and graphics cards from Intel, AMD, and Nvidia to pick from, along with a very healthy selection of other components. This system integrator uses off-the-shelf parts and clearly identifies their manufacturers, making it easy to research performance now and then upgrade items in the future. The sample system we configured (the AMD Ryzen 7X Gaming Elite with a 3700X and RTX 3070) costs about $350 more than a comparable DIY build.

For systems using all in-stock parts, expect a shipping date in late December. Any PCs with components marked as “pre-order” will ship based on supply.

CyberPowerPC is iBuyPower’s main competition, and for good reason. It also features a wide selection of off-the-shelf components for customizing a system, with parts on offer matching those commonly found in DIY builds. CyberPower even edges out iBuyPower slightly in its CPU spread, along with providing one option its rival doesn’t: laser engraving. Compared to a similar DIY build, the sample system we mocked up (the Gamer Ultra 3070 with an 3700X and RTX 3070) will set you back an additional $280.

Of the prebuilt vendors we looked at, CyberPowerPC alone offered reasonable prices for Radeon 6000 series parts. Currently estimated ship dates fall at the end of December.

NZXT keeps its custom PC service very simple. You can only choose from its cases and CPU coolers, and other components are limited in their selection—currently, no AMD parts are available. The company is transparent in its pricing, charging the MSRP for off-the-shelf parts along with a $99 building and service package, which includes a 2-year warranty and a guaranteed level of game performance.

When pitted against a DIY build, you’ll spend about $165 more for its $1,500 custom system configured with a 3060 Ti. Shipping for our sample system had an estimated date of December 16.

Make no mistake, the Alienware name will cost you. Our sample configuration of the Alienware Aurora Ryzen Edition R10 with a 3700X and 3070 came in at a staggering $500 over a similar DIY configuration ($2,165 vs. $1,617) and offers limited upgradability. But you’ll pay no surplus outside of the brand’s luxury tax when deciding between RTX 30-series cards: The difference in cost closely matches their list prices.

So believe it or not, our sample Alienware PC still slightly beat other vendors in price for the RTX 3080 and RTX 3090—and more key to this recommendation, had consistent stock. Our estimated delivery date was January 11.

The catch, of course, is that these systems must be available for pickup at your local store. But all things considered, if you live reasonably close to a Micro Center location, you can’t get your hands on a 3070 much faster than this.

Other vendors we considered

Maingear, Origin PC, Falcon Northwest, and Digital Storm build beautiful custom computers, but they don’t save any money over scalpers’ prices for new hardware—nor do they ship instantly. Only consider them if you no longer care about price and want a gorgeous, luxurious PC that comes with incredible customer service.

Velocity Micro has limited new hardware to chose from and also charged an $800 premium over DIY for a no-frills PC with a 5600X, B550M motherboard, and RTX 3070.

Puget Systems is well-known for its expertise, but you pay handsomely for it. Our sample system with a 5800X and RTX 3070 ran up a bill $800 higher than our competing DIY build.

Micro Center’s custom PC build service requires that the parts be in stock at your local store. Sadly, listings for RTX 30-series, Radeon 6000, or Ryzen 5000 components are sold out.