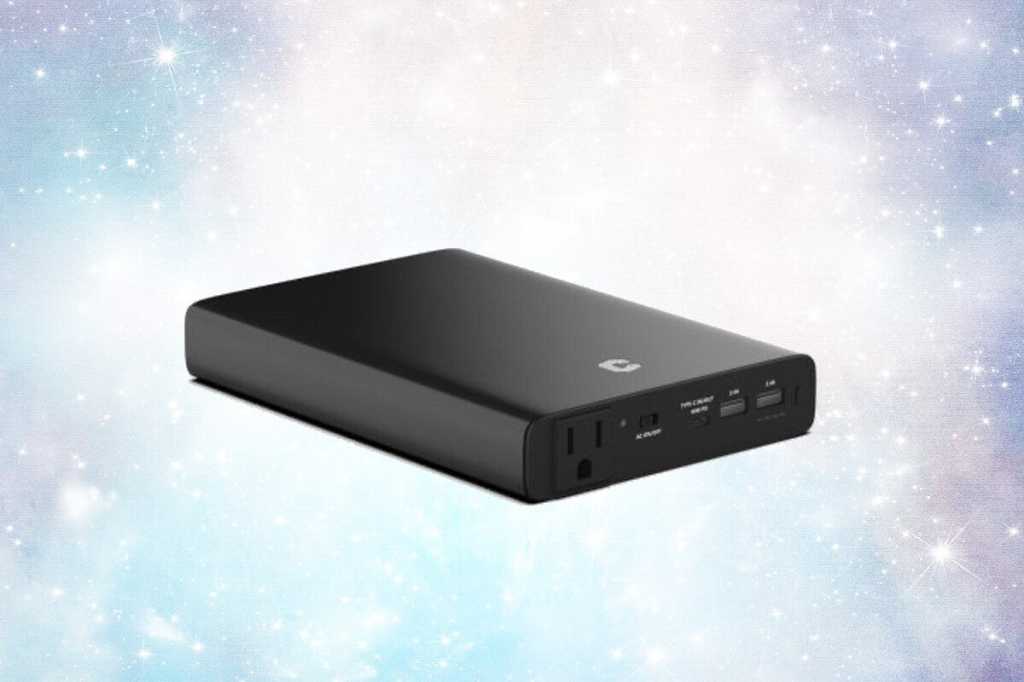 Image: ChargeTech
At a Glance

The ChargeTech Portable Power Outlet AM is a mix between a portable battery pack, albeit a big one, and one of the more robust and capable power stations. It includes several USB ports and a standard wall outlet capable of providing up to 100W of power.

It’s more expensive than a typical battery pack, priced at $199 most of the time, but can be found on sale for as low as $149. The “AM” version that I received is sheathed in an antimicrobial film that ChargeTech says will prevent viruses and bacteria from growing on the outside of the pack. (The microbe-friendly version of the Portable Power Outlet is slightly cheaper, with a regular price of $159, but on sale for $139.)

With a total capacity of 96.48Wh, or 27,000mAh, the pack has enough capacity to charge your phone several times or add a few hours of extra use to your laptop. There are a total of four ports on the front of the pack. From the left, there’s a standard 110V outlet accompanied by an on/off switch; there’s a USB-C port that’s used for charging devices or charging the pack; and there are two 2.4a USB ports. There’s also a button you can press to acitivate four indicator lights that represent how much charge the pack has.

One minor complaint I have with the design is that the outlet’s on/off label is backward. When I move the switch to the left, which is the side where “On” is, the outlet is actually off. And when the switch is moved to the right, where “Off” is located, the outlet is turned on. The label is only there to let you know what the switch does—turn the outlet on or off—but the positioning of it is confusing. Thankfully, there’s a small indicator light that turns green when the outlet is on, and red as the battery gets low.

To use one of the USB outlets, you simply plug something in. The pack will recognize it and start charging on its own. You can even charge the pack and another device at the same time.

As we do with all of our battery pack tests, we used the AVHzY USB Power Meter to verify the output of all three ports on the Portable Power Outlet. Both USB-A ports triggered the Apple 2.4A charging standard, and that’s it. We suspect ChargeTech didn’t include support for other standards, like QC 2.0 or QC 3.0, because there’s an outlet you can use with your smartphone’s standard wall adapter to get fast charging. We also verified that the USB-C supports Power Delivery at up to 20V/3A, or 60W.

Charging the Portable Power Outlet is done via the USB-C port, which can accept up to 60W. Included in the box is a wall adapter and USB-C cable, but the adapter maxes out at 30W. While it’s a nice bonus to have an adapter that will charge the device, it would have been nice to have a 60W adapter to ensure it charges at full speed.

It took a total of one hour and 48 minutes to fully charge the device at the full 60W speed. You can assume it’ll take roughly twice that long when using the included 30W adapter. Either way, it’s nice that the pack charges so fast. I’ve tested packs with a third of this capacity that have taken as long or longer to charge. Support for 60W is no joke.

I fully depleted the 96.48Wh capacity pack using the same adapter to record how much power was used before the pack turned off. The end result was 81.49Wh of output, giving the Portal Power Outlet an 84.15 percent efficiency rating. That’s the highest out of similar battery packs I’ve tested, like the Sherpa100AC, which tested at 78.78%.

To test the outlet, I connected a desk lamp to the fully charged battery and used a camera to monitor how long the light stayed on. This is a new lamp, so I don’t have numbers to compare it to, but the battery pack lasted seven hours and 42 minutes before the light turned off. That’s more than enough to light up a room during a power outage while also charging your phone.