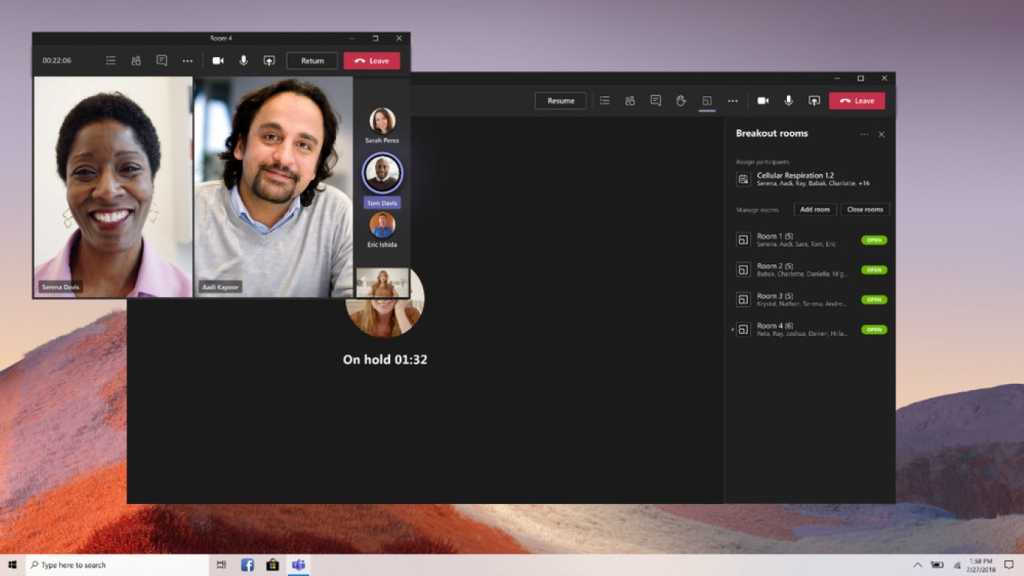 One of the most critical features of online collaboration has finally hit Microsoft Teams: breakout rooms, along with some holiday-themed Together Mode scenes for your virtual holiday parties.

The general availability of breakout rooms delivers on a promise Microsoft made this June, when the company laid out its Team roadmap for the fall. Rival services, like Zoom, have offered breakout rooms for months.

Meeting organizers (or teachers) can now create (and then delete) up to 50 breakout rooms, and either automatically or manually assign students to them. Organizers can also re-assign rooms in the middle of the meeting, and allow participants to move among breakout rooms—or not.  Within each Teams meeting, participants can use the Whiteboard app or share their screen if the right permissions are allowed.

There’s one small caveat, for now: A meeting organizer will need to be on a desktop PC, not mobile, to enable the new breakout rooms feature. (To do so, you’ll need to go to Teams > Settings > General and check Turn on new meeting experience, Microsoft said in a blog post.)

Microsoft has positioned Teams as both a tool for online collaboration for workplaces and as a method to teach students via distance learning, which has sometimes meant an odd fusion of practical and fun features. In this case, Microsoft has added a new series of “winter wonderland” holiday-themed virtual backgrounds for its Together Mode, which the company announced in July.

Together Mode rearranges the traditional grid of video windows into something approaching a real-world scene: an auditorium, for example, or a coffee shop. One of the new arrangements is… a snow fort?  Fans of Microsoft’s Halo game can even gather for their next important meeting in the United Nations Space Command, Microsoft said.

To turn on Together Mode, you’ll need at least five people in the meeting. Then, select Together mode from the Teams drop-down menu, and click the small pencil in the left-hand corner of the screen to choose a scene.