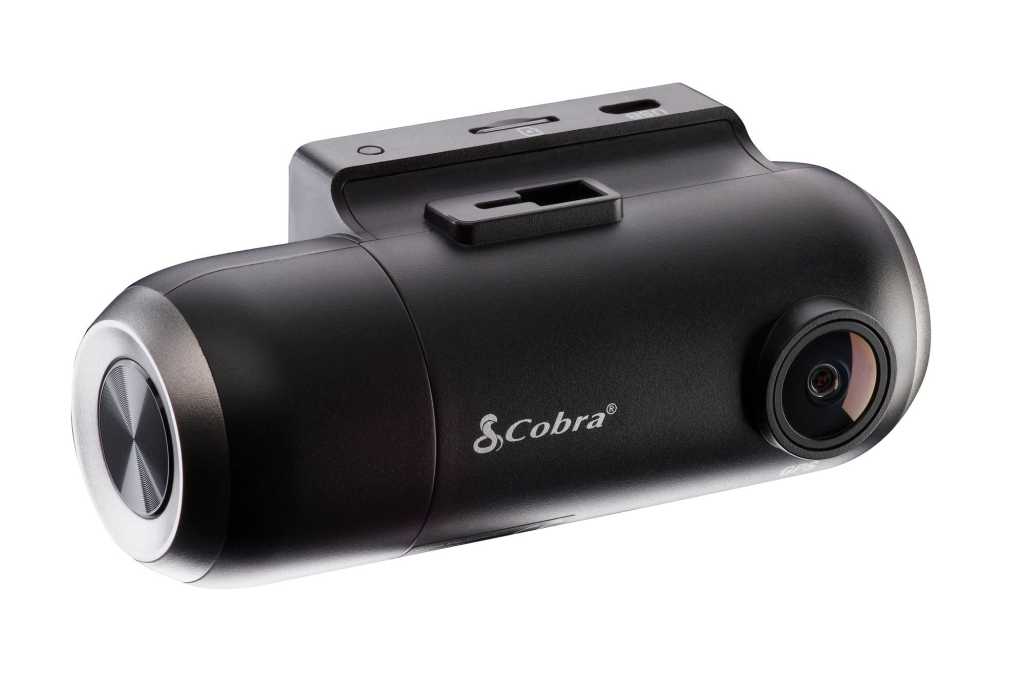 Image: Cobra
At a Glance

The Cobra SC 201 front/interior dash cam is easy to set up and use, it captures fantastic video, offers GPS cloud uploads (with A8), and it even throws in a 16GB SD card. But if you’re rocking an older Android phone, approach with caution.

Dash cams are all about capturing the action, and few do it better than the front/interior Cobra SC 201 Smart Dash Cam (currently $179.95 on Amazon). The exterior night video, especially, is unsurpassed in its ability to show details in dark surroundings and it offers a laundry list of features including GPS and cloud uploads. The company even includes a 16GB SD card. It’s well worth the money for what you get—just don’t try to use the cloud functionality with an older phone OS.

Dash cams generally come in two basic shapes: rectangular, and cylindrical. The SC 201 opts for the latter, which allows the most space for an interior camera. Both the front and interior cameras capture at 1080p. Most interior cameras are 720p, so this is an upgrade.

While 1080p might seem a bit boring in a world that offers 1440p and 2160p, it’s more than adequate for legal and even viewing purposes, plus it saves you a ton of memory card space and wear-and-tear. Put another way, it’s a lot cheaper in the long run.

The front camera has a good 140-degree field of view. Cobra declined to provide a number for the interior camera, merely claiming that it’s wide enough to capture the entire cabin. That proved accurate in testing. Four infrared lights surround the interior lens to make sure the action is captured regardless of how the cabin is lit.

The SC 201 sports a two-inch color display with four buttons on the underside of the camera, whose current function is revealed by icons on the bottom of the display. We found the buttons easy to press, and navigating the menus and settings quite easy. The screen will even flip to match the orientation of the camera.

One very nice features of the SC 201 is that it sets the time automatically using the GPS info, and tracks speed right out of the box. Few of the dash cams we’ve tested offer that level of sophistication. You can also turn the GPS/time and driver ID video watermarks on and off.

Name any other desirable dash cam feature, and you’ll likely find it on the SC 201: lane departure warnings, speed alerts, collision warnings, parking surveillance mode, et cetera. You can adjust just about everything as well.

You should also take comfort in Cobra’s established position as a dash cam vendor. That includes a one-year warranty—increasingly rare in a field rife with 90-day limits.

Alas, there were software issues with the older Honor 8 phone initially used in testing, which is running the older Android 7. The mapping and alert software, iRadar, crashed repeatedly when linking with the SC 201, and the Cobra Drive Smarter app used for viewing, uploading, and changing settings wouldn’t link at all. iOS 13.1 or newer is required as well.

Cobra cannot technically be faulted for supporting only Android 8 and later when Google itself has kicked anything older to the curb. But it could certainly do a better job of letting users know about the requirement—I found no requirement notices on the website or the box. Testing was finished on a Google Pixel 4X, where everything was hunky-dory until a firmware update killed the connection again. Cobra might want to have a sit-down with its software team.

The SC 201’s video is generally top-tier. There’s a bit of fisheye effect (an occupational hazard of wide fields of view), but it’s nicely color-saturated and detailed, and it handles rough roads decently without any appreciable image tearing or other flaws. 4K dash cams may get all the attention, but in real life we recommend 1080p dash cams to extend the lifespan of memory cards.

The GPS hadn’t kicked in quite yet on the capture above (most dash cams with GPS need up to five minutes to do so after powering on the car), so a second is included to show that it actually works. Note that the camera handles afternoon glare even when your vehicle is headed almost directly toward the sun.

There’s a startling amount of detail revealed in the exterior night capture shown below. This is two hours after sundown, and the the scene is nowhere near as bright as it seems to be in the capture. Despite the high amount of detail, the SC 201 manages to tone down headlight flare successfully.

Interior captures are also first-rate, capturing plenty of detail despite the contrast between the bright outside light and the shaded interior.

Thanks to the four infrared lights surrounding the interior camera, night captures in the cabin also show impressive detail. The cabin was extremely dark at the time this was taken.

You should have no issues with the SC 201’s captures. They are universally clear and detailed, albeit not quite as detailed as those from some of the better 4K units. But you won’t go broke buying SD cards, either.

The only possible fly in the capture ointment is Cobra’s use of a super capacitor instead of a battery. Super capacitors have their advantages: a lot more charge cycles and better resistance to cold. However, this particular unit provides only enough run time to save files. That’s nice, but if your 12-volt is destroyed in an accident, you won’t capture any action after that. A rare situation, but not unheard-of.

Great—if your phone is compatible

The SC 201 is very good at the basics and comes with a long warranty from a vendor with a top-notch reputation. If you are running Android 8 or later (or iOS), put it on your short list of front/interior cameras.