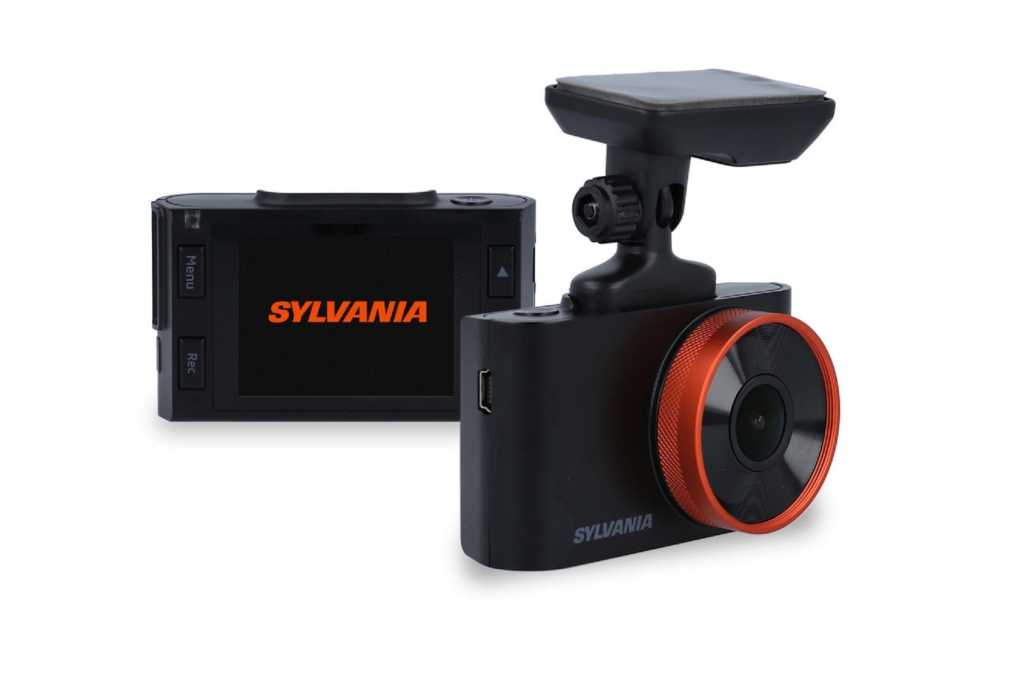 The Sylvania Roadsight Pro takes care of the basics (including GPS) competently. The optional rear camera is removable for city parking, and the magnetic mount for the front camera is a gem.

Sylvania is relatively new to the dash cam game, but the $140 Roadsight Pro ($140 on Amazon) is a pretty good place to start. Then again, I was predisposed upon installation to like it—it’s one of the very few systems to feature an optional, removable rear camera ($50 on AmazonRemove non-product link). More on that later. Most people will be more interested in the stylish looks and very good captures.

The Roadsight Pro is a small rectangle (measuring 3 x 1.3 x 1.7 inches), with an attractive (to me) orange lens body that couples magnetically with its mount. There’s a large two-inch color display on the back. Four buttons surround the display for navigating the menus, which are well thought-out and organized. Power routes through a mini-USB port on the right (viewed from the back). The card slot sits on the left, and the power button on the top. All in all, it’s a very clean design.

The 130-degree field-of-view (FOV) front camera is 1296p capable, but it comes preset to 1080p—the sweet spot for good detail and reasonable storage requirements. The optional rear camera is 1080p with a 140-degree FOV, and as I said before, it’s removable. Because I drive a convertible in a city (10 seconds for a slash-and-steal), I appreciate that feature a lot. If you plan to take them in and out a lot, make sure you seat the cameras properly upon replacement so that they function properly.

The Roadsight Pro has a second power/mini-USB port on the semi-permanent adhesive mount, and you must use it if you’re employing the optional rear camera, as I did. The 3.5mm connection for the rear camera is also found there. Locating that port on the mount made for neater cable routing than when the port is on the camera. The cable for the rear camera is also of reasonable thickness and easy to route. Such is not always the case.

The Roadsight Pro features integrated GPS, and of course, there’s a phone app. You can offload video by removing the SD card and using a reader on other computing devices as well. As trendy as phone apps may be, that extra reader option is handy if for some reason the camera dies.

Extras include a G-sensor parking mode (awake on shock) and ADAS (Advanced Driver, Assistance System) in the form of lane departure and front collision audio alerts. The Roadsight Pro has a battery on board which can power the camera for up to 30 minutes, but you’ll need a constant power source to enable long-term parking mode. I suggest a powered mirror/dash cam adapter or OBD-II-style power adapter as the easiest to install.

The Roadsight Pro’s captures are very good. I noticed that on a bright, sunny day, white reflective areas had a tendency to blow out a bit (lose detail and be overly bright) when the HDR was engaged. You can turn off HDR and gain more detail, with the loss, of course, of the vivid color. Detail is very good.

The setup has a few minor quirks. The front camera made an odd static-like noise for a few seconds when first starting up, and during some operations such as card formatting. Also, the rear camera had a tendency to show faint rolling bars during the video.

Beyond that, image stabilization was good on rough roads. We saw little graininess during video playback compared to many dash cams.

The above capture is actually the rear camera facing forward. I unfortunately, placed the rear mount where one of the heater wires interfered with the image, as you can see in the next image.

The heater wires are on full display in the rear night capture shown below. The camera in this instance was mounted on the rear deck rather than directly attached to the window, as it normally would be. I had to remove the mount because of poor original placement, and the sticky stuff wasn’t so sticky anymore.

The Sylvania’s captures are competent—far superior to the best cameras of only a few years ago, and more than adequate for legal use. Front and rear 1080p means you’ll get the detail you need from either direction.

The Sylvania Roadsight Pro is a very good dash cam—solid in every respect. It ticks all the basic feature boxes, and it’s especially handy for those who don’t want to leave thief-bait in their vehicle. The removable rear camera is every bit as good, and $190 for the duo is a good deal.