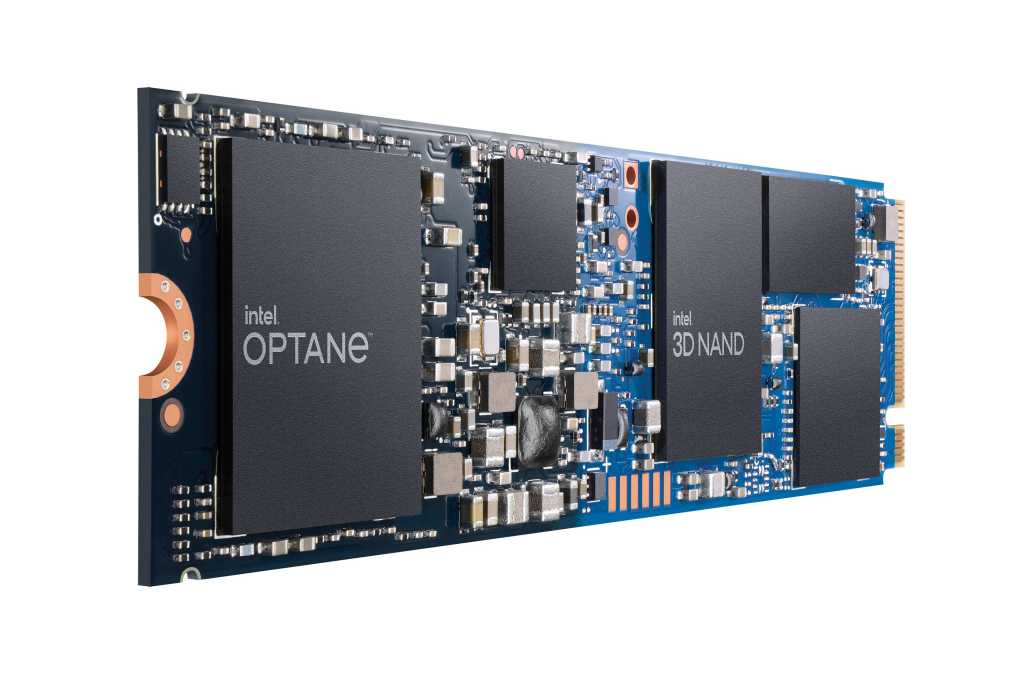 Intel may be selling its NAND division to storage rival SK Hynix, but the company will nonetheless introduce a newer, faster M.2 670P SSD, along with an updated Optane Memory drive.

Intel is introducing a 670P SSD drive that’s a sequel to its popular, low-priced 660P SSD. Like its predecessor, the 670P will be based on commodity QLC NAND using a new 144 layer design.

The new 670P will feature a next-gen controller and support for Pyrite 2.0 encryption, and is rated for 150TBW for every 512GB of capacity. Intel said performance will improve thanks to better dynamic SLC cache, as well.

QLC drives store four bits of data per cell to cram as much data as possible into NAND memory. This increases capacity on the NAND, but tends to lead to sizeable performance hits. To compensate for this, drive makers configure the NAND’s unused capacity as SLC (single-level cell) as cache to improve performance.

Like most drives, the cache is dynamic and increases and decreases depending on the capacity. With the 670P, Intel said it improved this cache size to be about 11 percent larger over the previous 660P and 660P models. An empty 2TB 670P drive, for example, would have 280GB set aside as cache. About 24GB will be static cache that will remain constant no matter the drive’s capacity, and 256GB will be be set aside for dynamic cache.

In the end, consumers should see higher performance from what has been a relatively low-cost class of SSDs. Intel said it’s selling three capacities in Q1 next year: 2TB, 1TB and 512GB. No prices were announced, but these drives will have to compete on an SSD playing field where there’s an oversupply of NAND.

Intel’s other consumer SSD news is a new iteration to its Optane Memory H10 drive. Like its predecessor, the Optane Memory H20 will be built using up to 1TB of QLC NAND and 32GB of Intel’s Optane memory. Optane offers magnitudes lower latency compared to traditional NAND, but can’t match its density or price.

By using Optane memory as superfast tiered storage, Optane Memory drives can make huge dents in such mundane tasks as opening and launching applications and games. With the Optane Memory H20, Intel said it has upgraded the 3D XPoint Media, and has moved to the same newer 144 layer QLC NAND.

Intel’s Optane Memory H20 will require an 11th gen “U” series CPU and 500-series chipset to use. Those requirements pretty much telegraph that the new Optane Memory drive will go primarily into laptops.

The new drive won’t arrive until the second quarter of 2021. Intel actually didn’t disclose pricing nor performance of both M.2 drives.

The 670P, of course, will use NAND produced at Intel’s Fab 68 in China that the company is in the process of selling to SK Hynix. The Optane Memory H20 will use NAND from Fab 68, and also memory produced in the joint Micron/Intel partnership. Despite the imminent sale, Intel will likely continue to sell the drives.

In areas that won’t see service in consumer PCs, Intel also showed off its what it claims is not only the world’s fastest Optane drive, but also the fastest center drive: the P5800X.

The drive will support PCie 4.0 and is rated to hit 7.2GBps sequential read speeds and 6.2GB sequential write speeds. Random 4K IOPS read and write are rated at 1.5 million and up to 1.8 million IOPS on mixed 70/30 random IOPs.

Comparing it to NAND-based drives would be unfair so Intel said it compared it to the previous Optane P4800X where it says the newer P5800X offers 3x mixed random reads and 3x the sequential bandwidth. It’s the huge IOPS advantage that Optane has had over traditional NAND which continues to pay off, Intel said.

Intel said three 400GB P5800X Optane drives were able to effectively able to prevent buffer the network without saturation. Using its own 3.2TB D7-5600 SSDs would require seven of the drives.

Correction: A previous version of this story incorrectly stated terabytes written for the 670P drive. PCWorld regrets the error.