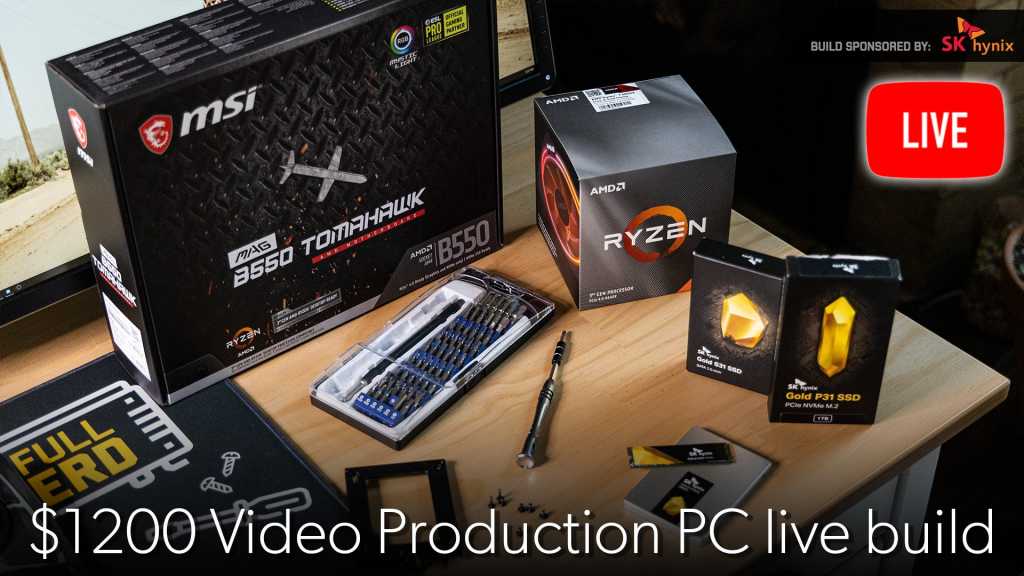 While it’s hard to find the latest and greatest PC hardware right now, there are still great options for mid-range PC builds—especially if you focus on video production in Adobe Premiere Pro, something I care about as the Lead Video Producer here at PCWorld.

I’ve personally built many Intel-based systems over the years, but this time I wanted to build a PC based on an AMD Ryzen CPU—my first try at relying on Team Red for a production machine. I have a separate gaming rig, so I wasn’t too concerned about gaming performance. But luckily the GPU I put in this machine can still hold its own at 1080p.

Watch me build this PC live on PCWorld’s YouTube channel:

Here is the full parts list for this system:

At the heart of the system is an 8-core Ryzen 7 3800X. Would I have loved to plop the monster 16-core 5950X into this build? Hell yeah! Premiere Pro also scales well with more cores (to a point). But even if I could afford that chip on my budget, it’s impossible to find right now. Thus you find me with the modest 8-core chip that was actually attainable (and a lot more affordable). I did choose a higher-end B550 board that could handle an upgrade down the road when stocks replenish.

High-end PC gamers out there may scoff at the inclusion of a GTX 1660 Super, but once again stock is limited in newer RTX cards, and paying for a 20-series Nvidia GPU doesn’t make sense. AMD cards were out of the question as well, because Premiere Pro and OBS play better with Nvidia GPUs. Whatever Nvidia releases for the low end in 2021 will most likely overpower this 1660 Super, but if you can’t wait it’s still a great part. Here at PCWorld we mostly deal in 1080p deliverables and don’t rely on many graphical effects that would warrant a jump in processing power.

The last crucial part of any PC I build is a digital-to-audio converter, or DAC, for high-quality audio playback. My go-to pick for a DAC that works great in both professional and gaming uses is the Creative Sound Blaster X3, a USB-C based outboard DAC that also features the fantastic Super X-Fi technology. As an audio engineer by trade sound is important to me, so I’ve never relied on motherboard audio. I’m so serious about it that when I build PCs I don’t even hook up the front panel audio connection, because it’s never going to be used.

At the time of this build I had priced out just over $1,200 for this system, but for many reasons the prices have continued to fluctuate. I’ll be updating this article in the coming months to highlight the performance on this system and give some recommendations on newer parts if something releases.