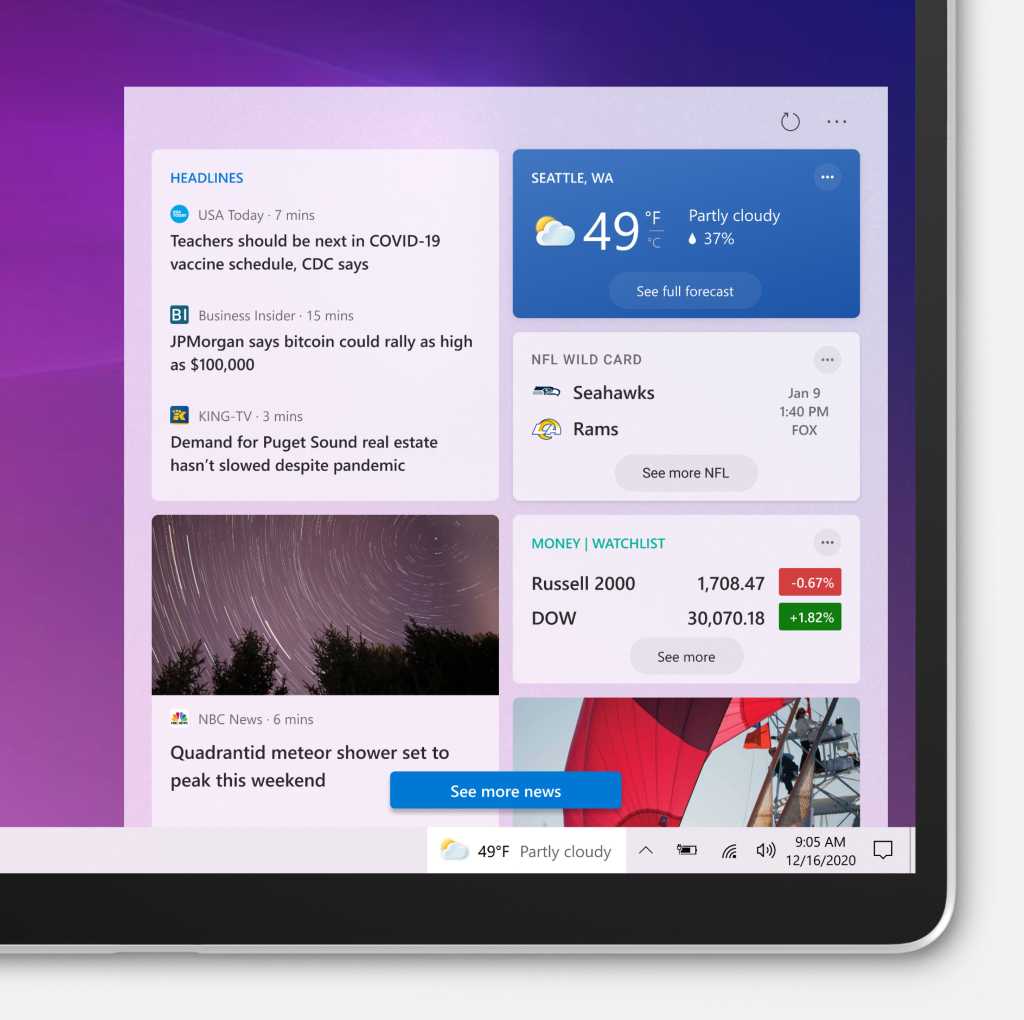 Microsoft’s latest Windows 10 Insider build adds a significant number of features to Windows 10, including weather and news widgets in the taskbar, new storage settings, and some additional command-line tweaks.

They’re all part of Windows 10 Insider Build 21286, released in the Windows 10 Dev Channel. Technically, the features in this build are sample code, and there’s no guarantee that these features will ever come to pass. The “news and interests” taskbar addition looks polished enough, however, that it could potentially be part of a reported UI redesign due to arrive in Windows, known as “Sun Valley.” Microsoft will make the new build available to all Insiders who subscribe to the Dev Channel.

Microsoft already offers two apps within Windows that provide up-to-date information on news and weather—the News and Weather apps, naturally. Microsoft hasn’t confirmed that these apps will be going away, but the company now says that the two will be combined into an “integrated feed of dynamic content” that will be available from the Windows 10 taskbar. Based on a screenshot released by Microsoft, it appears that the taskbar will display the current weather, in a blurb that mirrors the taskbar’s time display.

“Instead of switching between apps or your PC and phone to stay up to date with the news and interests you care about – seamlessly peek into your feed directly from the taskbar anytime you want throughout your day,” Microsoft said in a blog post announcing the new features.

If this taskbar news widget sounds familiar, it should: Last April, Microsoft debuted the Microsoft News Bar, a widget that lives in your taskbar (or along one side of your display) and provided a stream of headlines. News Bar is still listed as a beta app, so it’s possible that Microsoft is replacing it with this new taskbar widget. In any event, there are several ways to use Microsoft’s MSN news service to receive free news, tailored to your interests, from sources and publications you specify. Microsoft’s new widget just adds another.

It’s possible that we’re receiving one of our first looks at “Sun Valley,” the proposed Windows 10 UI redesign that has surfaced in the past few days. For one, a job listing (since edited) originally promised applicants that they would be hired to “deliver a sweeping visual rejuvenation of Windows experiences to signal to our customers that Windows is BACK.” Windows Central originally reported on the proposed Sun Valley redesign, which could include changes to the Start Menu and Taskbar. Windows Latest has suspected that we’ll see some early looks at the Sun Valley UI in the current Windows feature release, known informally as Windows 21H1, though a more formal rollout of Sun Valley is expected in the 21H2 release this fall. The new taskbar widget could be a preview.

You may be familiar with Storage Sense, a Windows 10 Setting that allows you to see which apps are gobbling up space on your hard drive or SSD. Storage Spaces is an offshoot of that, allowing you to create “pools” of storage. Pools aren’t associated with a specific physical drive, and can be used to create virtual drives that can span more than one disk. They’re especially handy in creating a pool of storage that keeps a redundant copy of your data on a separate disk, to prevent losing data in a disk crash. It’s very much like backing up your data to a cloud or another disk, but it’s performed locally and automatically, without needing you to babysit the process.

Previously, this was all managed by the Windows Control Panel, and is now being handled by the Settings menu. Microsoft has, over time, continued to migrate functions from the legacy Control Panel into Settings.

Tweaks and other changes

Microsoft has also made a few small tweaks to other aspects of Windows:

You can now perform commands automatically upon launching a Windows Subsystem for Linux distribution. You can accomplish this, Microsoft says, by editing the /etc/wsl.conf file in your distribution and adding an option titled “command” under a section titled “boot.”

Windows File Recovery, a text-based Windows app, has been tweaked to include a pair of simplified recovery modes. It’s necessary only if your disk has suffered file corruption, or if files have been accidentally deleted.

Microsoft has also fixed several bugs that shipped in previous versions of the Dev Channel code. A full list is available in the company’s blog post.