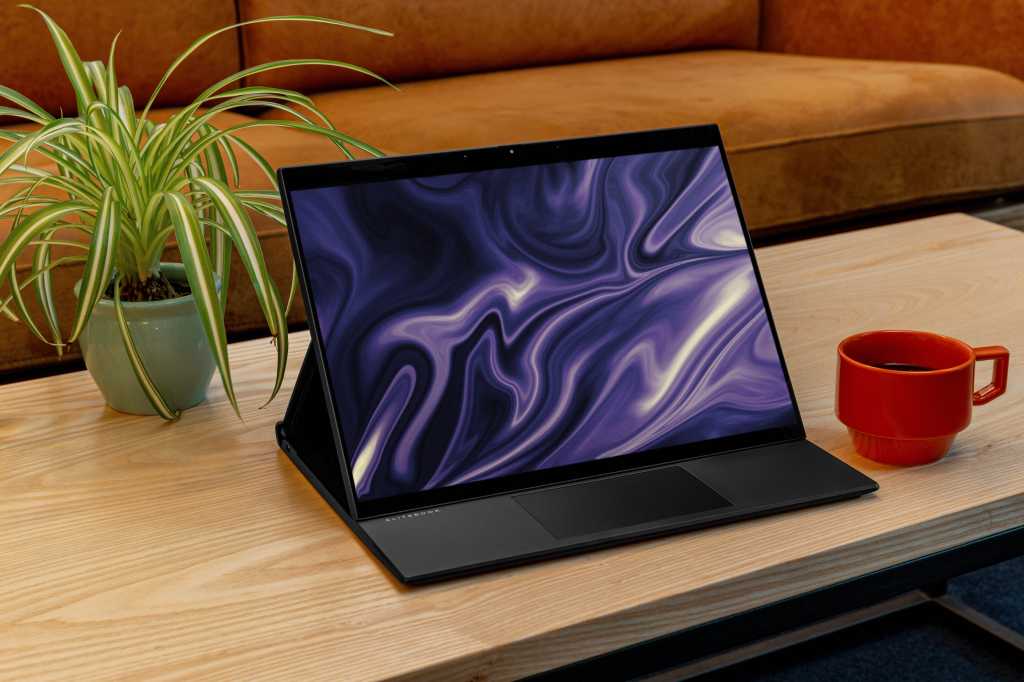 HP has adapted 2018’s consumer-oriented Spectre Folio into a business-class device, the new Elite Folio, which features the same leather-wrapped 2-in-1 design, but has swapped Intel’s Core chip for a Qualcomm Snapdragon—and swiped the pen design from the Microsoft Surface Pro X.

HP has thus transitioned the 13.5-inch Elite Folio laptop from a statement PC to one designed more for practicality. Though the Snapdragon 8cx lineup has suffered somewhat in terms of performance, there’s no question that it can offer massive battery life—and though HP didn’t specify the exact size of the battery, executives claimed that it can offer up to 24.5 hours of local video playback, in a laptop weighing just 2.85 pounds.

The pen design marks the second major improvement. Tablet makers have struggled with pen design for years, from including a pen loop—as the Spectre Folio did—to the pen holsters Samsung prefers. Microsoft’s Surface Pro X (and the Dell Inspiron 7000 2-in-1) introduced a third option: placing a flat, rechargeable pen into a narrow cubby that could be hidden under the display.

The Elite Folio adopts that design, and allows you to instantly launch an app (such as the Windows Whiteboard app, presumably) when the pen is removed from its cubby. HP hasn’t said how long the Elite Folio’s AES pen will last, though since it recharges every time you put it back into its cubby, that duration may be academic.

Though the Elite Folio isn’t actually a tablet, it manages to transition between a traditional clamshell form factor, pulling forward into what HP refers to as media mode. The latter leaves the touchpad exposed, allowing you to still interact with the touchpad or the 10-poingt 13.5-inch touchscreen, protected with Gorilla Glass 5. You can see how it all works, in our interaction with the previous Spectre Folio, below. (Our Spectre Folio review adds more insight.)

You’ll find a few other interesting touches within the Elite Folio, too: of note is the optional HP Privacy Screen, which uses reflective technology to essentially black out the screen when viewed at an oblique angle and protect prying eyes from seeing what you’re working on. The Elite Folio’s keyboard is spill-resistant, too. The Elite Folio has not two but four Bang & Olufsen-tuned speakers, which should promise a solid audio experience; and there’s 5G support, too, compliments of the integrated Qualcomm Snapdragon x55 modem.

Otherwise, the specs are practical: HP doesn’t offer anything more than a basic 1080p resolution, 16GB of LPDDR4X memory, and up to 512GB of M.2. NVME SSD storage.

Oh, and does the Elite Folio still maintain that luxurious leather look? Well, sort of. Instead of leather, HP chose to use “vegan leather” instead. That’s code for 100 percent poly vinyl.

Here’s what we know of the HP Elite Folio’s specs. Note that the processor isn’t the only thing that’s changed within the basic Folio design; connectivity options have improved, too, from 802.11ac to 802.11ax, and from Bluetooth 4.2 to Bluetooth LE 5.0. The webcam, too is also Windows Hello certified, with a mechanical privacy shutter.

What we don’t know is what the HP Elite Folio will cost. We’re told HP will provide that information around February, when it will ship the Elite Folio in North America.