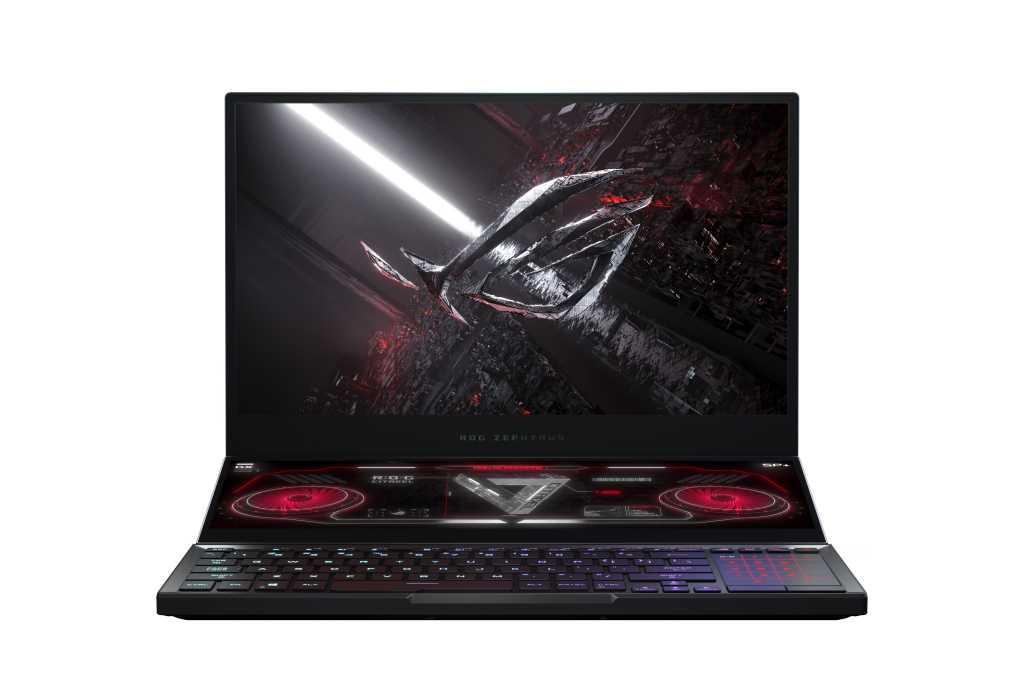 Well, you can’t say you can’t get a high-end GPU in a Ryzen gaming laptop anymore. That former truth was shattered on Tuesday when Asus announced a new Zephyrus Duo 15 SE featuring an AMD Ryzen 5900HX and a GeForce RTX 3080 inside.

The primary panel is a 15.6-inch screen that can be had with either a high-frame rate 300Hz 1080p screen or a a 120Hz 4K UHD IPS panel. The secondary 14.1-inch panel comes in a 3840×1100 resolution or 1920×550. Both are IPS and touch-enabled. The Zephyrus Duo 15 SE’s secondary panel tilts up like the previous iteration, which aids in cooling by creating a direct air flow through the chassis and components. For this version, Asus said it has improved cooling performance even more with a new “radically” redesigned fan blade that varies in thickness from the base to the tip. The blades actually actually are shaped to reduce turbulence and fan noise and results in a 13 percent improved air flow.

Like other ROG laptops, Asus again relies on Thermal Grizzly’s liquid metal compound paste but due to the design of the Ryzen 5000, even more precautions had to be taken to prevent the highly efficient and mercurial-like liquid metal from flowing onto the surface-mounted chips near the CPU die.

All told, the cooling performance of the Zephyrus Duo 15 SE adds up to about a 165 watt thermal budget. That means the GeForce RTX 3080 in the laptop should run up to 1,645MHz with 115 watts dedicated to it—and even higher clock speeds when Nvidia’s Dynamic Boost is activated.

Asus said the Ryzen 9 5900HX can use up 50 watts of the thermal budget and boost up to 90 watts when the GPU isn’t active.

All told, the ROG Zephyrus Duo 15 SE is a high-end laptop home that AMD’s Ryzen Mobile brand has been looking for since its introduction. This obviously means it won’t be cheap either. Asus said the ROG Zephyrus 15 SE will be immediately available for pre-order in North America starting at $2,900.

Pricing is unfortunately not available, but look for the SCAR notebooks ship sometime in the next two months.

Liquid metal and a big battery

While you may not get an RTX 3080 option, Asus will give all four ROG Strix laptops the same liquid metal treatment as its high-end Zephyrus Duo. In fact, all ROG Ryzen-based laptops will be treated with a liquid-metal process which should improve cooling due to liquid-metal’s more efficient heat conductivity.

All four Strix gaming notebooks also receive large 90 watt hour batteries, which helps if you do actually need to do light-duty work when unplugged. Like most gaming laptops though, you should almost treat gaming on battery as more of a backup UPS system rather than the actual battery life. Powerful notebooks like these are made to be plugged in as much as possible.

Asus only released pricing for the ROG Strix G17, which will available immediately for pre-order starting at $1,800.