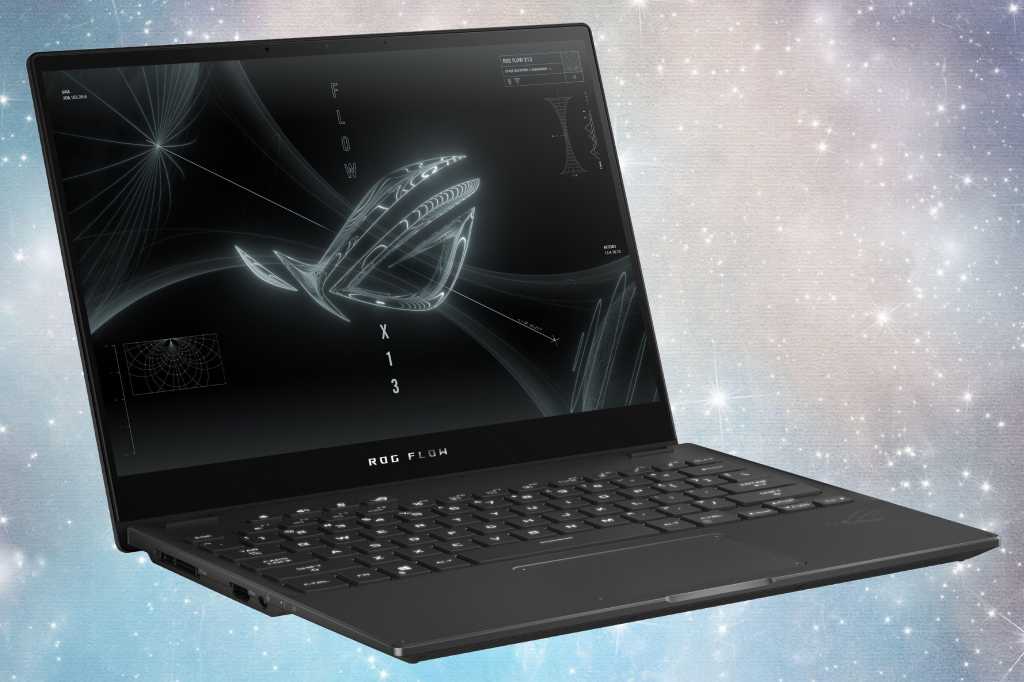 In one of the boldest claims to come out of CES, Asus claims its convertible ROG Flow X13 can be as fast, if not faster, than much larger gaming laptops.

Let’s say that one more time: Asus is claiming a 2.8-pound, 13-inch thin and light convertible laptop can outperform desktop replacement gaming laptops that weigh more than twice as much. While you might dismiss it as hyperbole, when you hear about the trick Asus pulls to do it, you just might be impressed.

Asus catapults the ROG Flow X13 up to and past larger gaming laptops with the new ROG XG Mobile external graphics dock.

Besides the x8 PCIe connection, Asus also plumbs in an additional USB-C 10Gbps to drive the USB ports, Gigabit ethernet, and SD card available on the dock. The XG Mobile itself is built using a custom PCB and Nvidia’s new GeForce RTX 3080 mobile GPU with 16GB of RAM, powered by an internal 280-watt brick that drives both the ROG Flow X13 and the XG Mobile when powered up.

The pairing brings a huge performance advantage in thermals. When running with the ROG XG Mobile rather than the internal GPU, the Flow X13’s Ryzen 9 5980HS processor gets an increased thermal budget, which allows it to run at higher clock speeds for longer periods of time. The XG Mobile also features a custom vapor chamber cooler that keeps all of the heat outside of the laptop and should allow the mobile GeForce RTX 3080 to run at 1,810MHz with a power budget of 150 watts.

At 2.2 pounds and just 29mm thick, Asus actually expects some people to bring the ROG XG Mobile on the road with them. The company even designed a custom carrying case that fits both the ROG Flow X13 and the XG Mobile dock. Most conventional eGPU cabinets over the years have typically been the size of large shoeboxes and built around the concept of accepting standard full-sized desktop graphics cards–something you’d keep at home, not take on the road.

The upside to the Asus ROG XG Mobile is you’ll likely get the same, if not more performance than a typical 5-pound gaming laptop would give you. The downside is you’ll need to run it off wall power, of course, and you can’t simply swap the mobile GPU out with a new one down the road.

The first ROG Flow X13 laptops will feature Ryzen 5000 chips. If you want AMD’s highest-end HS chip, you’ll have to wait until later this year, when a special “Supernova Edition” of the notebook will ship with a Ryzen 9 5980HS chip that can boost up to 4.8GHz on lightly threaded tasks. All the other offered Ryzen CPUs will support Nvidia’s Dynamic Boost—a feature that we’ve seen so far only on Intel-based laptops—but the Supernova Edition will not. Like other ROG laptops, the Flow X13 will also make judicious use of more efficient liquid metal thermal paste. Asus said the laptop features cooling traditionally not seen on a laptop this small and thin.

Pricing for the Asus ROG Flow X13 and ROG XG Mobile wasn’t announced, but both will ship in the next two months.