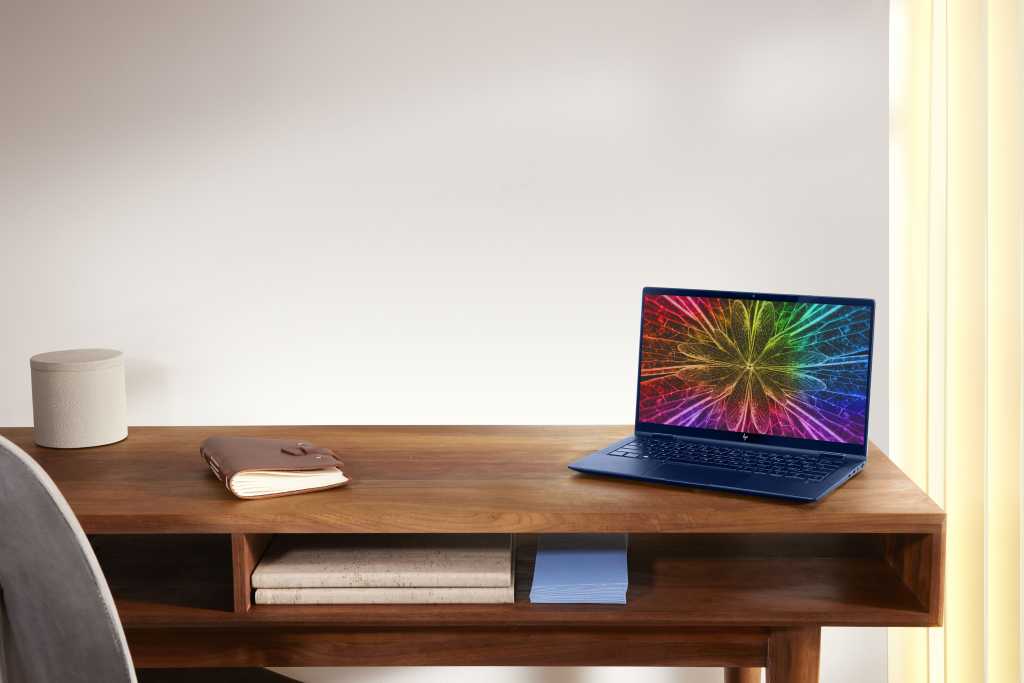 Announced just before CES 2021 and due to ship in February, HP has not issued pricing for either new model. (The first-gen model we tested costs about $2,100.) However, we can compare the original laptop’s specs to what’s new this time around.

HP has upgraded the Intel Core CPUs from 8th-gen Whiskey Lake to 11th-gen Tiger Lake U-series Core i3, Core i5, or Core i7 mobile CPUs. You can also choose business-minded vPro versions of the Core i5 and Core i7, which bring additional performance, security, and stability features.

The Elite Dragonfly G2 has the same display options as before: a base FHD (1920×1080), UHD (3840×2160), or an FHD SureView Reflect touch display with integrated privacy screen and a 1,000-nit maximum brightness. Note that the SureView display’s high nit count exists in part to counteract a slight loss in brightness because of the SureView privacy feature and the touch capability. The videoconferencing-focused Elite Dragonfly Max offers just the latter display.

These are low-power ‘U’ chips for mobile PCs, so there are no discrete graphics.

All models offer a choice of regular or encrypted SSDs up to 2TB capacity, with either M.2 SATA3 or PCIe NVMe x4 interfaces.

In addition to Wi-Fi 6, 4G or 5G options are available for both models.

One USB SuperSpeed 5Gbps, two Thunderbolt 3, one HDMI 1.4b, one Nano SIM.

The G2’s webcam is your basic 720p (1.2MP) with infrared (IR), but the G2 gets a dedicated camera switch on the keyboard instead of the manual shutter of its predecessor. It also has two user-facing mics and one world-facing mic.

On the videoconferencing-optimized Max, HP ups the webcam to 5MP for superior image quality. It retains the manual switch like the original Elite Dragonfly. It also gets a fourth mic (world-facing) for a better audio experience.

In addition to all this hardware, HP builds in a raft of audio enhancement technologies including HP Audio Boost for noise reduction, HP Sound Calibration to optimize the signal to your hearing, and HP Dynamic Audio to adjust the sound quality for speech, music, or movies.

A whole lot of AI

The audio features mentioned above are only some of the AI-driven improvements in the second generation. The Elite Dragonfly G2 and Elite Dragonfly Max can detect whether they’re operating on your lap, and will lower the device temperature to avoid user discomfort (with a natural hit to performance). They can also detect whether they’ve been put into a laptop bag, and will reduce battery usage while in the bag and accelerate wake-up time when removed from the bag. HP Tamper Lock walls off the BIOS if it detects physical intrusion on the laptop.

The HP Elite Dragonfly laptops should manage to make IT departments happy with their security and management features, and make users happy with their design enhancements and conveniences. Don’t expect them to be cheap, but they should be pretty cool.