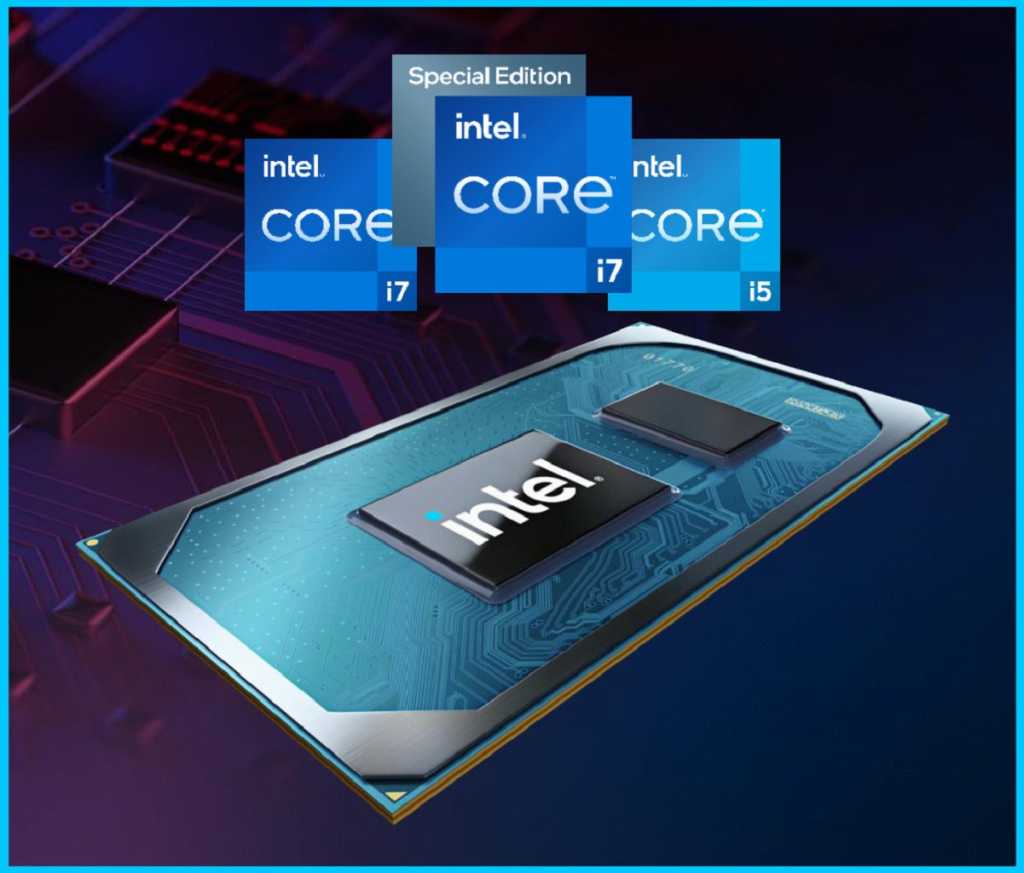 Intel is carving out a new ultraportable gaming segment with a specific variant of its 11th-gen Tiger Lake Core chips, known as the H35—complemented by a new “Special Edition” brand and even a desktop-like, 8-core H-series chip that will debut later this quarter, promising massive bandwidth.

Intel also said that it would bring Tiger Lake to Chromebooks, complete with Thunderbolt capabilities. Intel rounded out its notebook PC announcements for CES 2021 by adding some more options to its existing 10th-gen processor lineup.

Traditionally, Intel’s notebook offerings have broken down into Y-series chips for the thinnest of notebooks, and tablets; U-series processors for mainstream notebooks, and the H-series processors for thicker, heavier gaming machines. In general, gaming laptops have followed the budget/midrange/premium breakdown, using price as a guide. With the H35, however, Intel is trying to segment gaming notebooks by their physical characteristics.

According to Frederik Hamberger, the general manager of premium and gaming notebook segments at Intel, even as the most powerful laptops have become thinner, the demand for thin-and-light ultraportable PCs has accelerated. Customers like students want both: a notebook they can carry around with them during the day, “and then, during a break, or during the evenings, they want to be able to get enthusiast-level gameplay,” he said. That was the genesis of Intel’s 4-core, 8-thread H35 series, manufactured on Intel’s 10nm process.

The category is somewhat arbitrary. Intel defines “ultraportable gaming” as a laptop with a 14-inch to 15-inch display, and less than 18mm thick. More importantly is what the H35 (an “H”-series part operating at 35W) can offer: The target is 1080p gaming at 70 frames per second or higher, and at “high” graphics settings.

In Intel’s definition, ultraportable gaming notebooks are synonymous with the 14- to 15-inch screen size. The bigger 15-inch notebooks can split the difference between ultraportables and what Intel calls a “thin enthusiast” class of notebooks, with up to 17-inch displays at 1080p/240Hz or 4K/60Hz.

Prices for the H35 gaming ultraportables will range from about $999 to over $2,000. Intel said it had commitments for about forty H35 designs from its top manufacturing partners during the first half of 2021, with Acer, Asus, MSI and Vaio leading the way.

Intel was somewhat vague about the specifications of the new 4-core/8-thread, 10nm H35 processors in advance of the launch. We do know, however, that they’ll finally feature PCI Express Gen 4 (PCIe 4.0) , complete with four lanes off of the CPU to connect discrete graphics—whatngraphics, we don’t know, though Intel pointedly did not mention its own Xe graphics. Not surprisingly, the chip will support fast components: up to DDR4-3200 and LPDDR4x-4266, Thunderbolt 4 connections, plus Intel’s Killer WiFi 6 and 6E.

There’s one more thing: Resizable BAR (Base Access Register), a technology that you might otherwise know as AMD’s Smart Access Memory. AMD introduced this first inside the RX 6800 XT. It uses the PCI Express specification to give the Ryzen CPU access to the ultrafast graphics memory for an overall, slight performance uplift—our 6800XT review has the details.

Because Resizeable BAR is a spec that both Nvidia and Intel have access to, both companies have been working on implementing it. Hamberger said you’ll see the Resizeable BAR technology available in both 10th-gen and 11th-gen systems—though, presumably, only if you pair an Nvidia GPU alongside Intel’s CPU.

Intel released some performance information. An H35 should feature a 15-percent gen-over-gen single-threaded performance improvements versus a comparable 10th-gen Core i7, and a 9-percent uplift versus an 11th-gen Core at 15W. (Intel’s Tiger Lake gives a lot of leeway to PC makers in specifying an operating range in watts, which will scale performance—confusingly, perhaps, for some.)

Intel also believes that the H35 could offer up to a 40-percent multithreaded CPU improvement over a 15W 11th-gen Tiger Lake, and more than double the graphics performance of a 10th-gen H-series part. “That means that it’s roughly running like what a six core processor does in multi-threaded performance today,” Hamberger said.

Intel also said that that H35 notebooks would deliver “smooth 4K” and over 70 fps in most popular games, naming Destiny 2: Beyond Light, Jedi: Fallen Order, Valorant, and Troy: A Total War Saga, among others. Intel said detailed performance information would be made available after Nvidia’s CES presentation on Tuesday, when it’s expected to unveil new mobile GPUs.

Intel did mix a few wild cards into the comparison deck. The company didn’t quite specify whether its comparisons were being made between the “generic” H35 parts, or two new additions that will debut.

Intel has previously added designations to highlight “premium” models: X-series chips, the Core i9 brand, and the “K” series of unlocked processors. Now there’s another: the Core i7 H35 “Special Edition,” which boasts “the fastest single-threaded laptop performance,” according to Intel—up to 5GHz. We don’t know the name, the price of the chip, or even its full specs, though it, too, is a 4-core, 8-thread part.

The Core i7-11375H, Intel claims, is up to 30 percent faster than a 45W AMD Ryzen 4900H—though it estimated that performance while using an Intel compiler and the single-threaded SpecRate 2017_int_base benchmark to do it. Regardless, Intel believes that the 11375H will be roughly as fast as a 45W Comet Lake processor, using the same benchmark.

Is the I7-11375H SE not good enough? Well, Intel also teased yet another H-series part: an unnamed 11th-gen “8-core processor” that will begin shipping later this quarter. According to Hamberger, this chip wll be for “halo” systems, or the best of the best. (We’ve known about this chip since last September, when Intel quietly announced it within a blog post.)

The 10nm chip will have eight cores and 16 threads, more than the other Tiger Lake options. But it will also feature massive bandwidth—a full 20 lanes of PCIe 4.0 to the GPU—enough for a discrete GPU as well as a powerful PCIe SSD. “For that upcoming next-generation graphic card from Nvidia, with their new GeForce—we’re going to have full bandwidth for that,” Hamberger said.

It, too, appears to run at speeds up to 5GHz, and include some of the features associated with the H35 systems, including WiFi 6E. As to the price—or even the power it will consume—we’ll have to wait a few weeks to find out.

Intel also filled out its lineup by announcing its first Tiger Lake-based Chromebooks, including Evo models—a notable omission from the original announcement of the Evo brand.

According to Josh Newman, the general manager of mobile innovation segments for Intel, Chromebook demand exploded during the pandemic, soaring 122 percent year-over-year during the third quarter of 2020 to 9.4 million units. Now Intel’s adapting Tiger Lake to that market. The new Chromebooks will be the first to include Thunderbolt capabilities, Newman said.

Intel claims that the Tiger Lake processors will drive performance up 1.19X in benchmarks like WebXPRT, 2.7X in 3DMark Slingshot, 1.23x in Lightroom photo creation, and 1.77X in medial multitasking using 4K YouTube videos in Chrome.

“We believe that this helps us give people choice in the OS… that works best for them, but you have to do that without compromising the performance the features and the experience, which is what we verify with the Intel Evo platform,” Newman said.

For those Chromebook manufacturers who prefer a more traditional 6W or 10W part, Intel is also formally introducing a new generation of 11th-gen Pentium Silver and Celeron processors, which use the Tremont cores found in the Lakefield hybrid processor. According to Intel’s Newman, these were previously code-named Jasper Lake. They’ll debut first in mobile PCs shipping this quarter, and then in mini PCs sometime thereafter.

Intel said that it’s beefing up its 10th-gen Comet Lake H-series gaming CPUs, too. About a year ago, Comet Lake-H was about the best Core i7 gaming processor you could buy; now, Intel’s added both the Core i7-10870H and the Core i5-10500H to the lineup, part of a refreshed set of 10th-gen Comet Lake H gaming laptops that will begin rolling out this month.

Otherwise, the Rocket Lake H family remains virtually unchanged. The new chips still offer 8 cores and 16 threads, and top out at 5.3GHz. WiFi 6 (Gig+) and Thunderbolt 3 still offer connectivity, with 16 lanes of PCI Express 3.0 off of the CPU to connect to a GPU and SSD storage.

Intel showed off “Clover Falls,” the AI coprocessor that Intel announced last December. Intel said then that Clover Falls could be used to help a laptop automatically dim its display after detecting that the user was no longer looking at it, or had walked away—when it would drop into sleep mode. That’s a capability which could be used to extend battery life, Newman noted. Unfortunately, however, it currently requires the use of the webcam to work—which means that if a user engaged a privacy shutter or simply taped over the webcam, users wouldn’t receive the full benefit of Clover Falls.

Intel also announced an odd new feature: PCs built upon the 11th-gen Core chips will be the first to support Alexa voice commands for Amazon-certified smart home cameras. Furthermore, the cameras can now be used for remote monitoring as well as videoconferencing, with a “super resolution” feature, “which actually translates to an even better experience than Amazon’s own Echo Show experience when you’re using these cameras with an Intel 11th-gen Core processor laptop,” Newman said.

This story was updated at 2:26 PM with additional details.