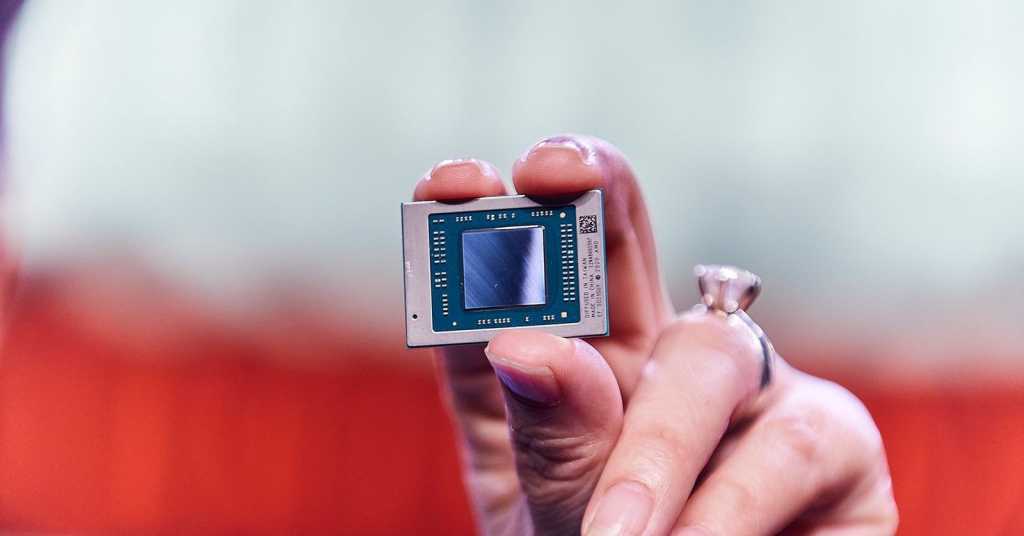 AMD officially launched its Ryzen 5000 Mobile processors at CES 2021 on Tuesday, hoping to continue what it’s accomplished on the desktop: bring its powerful Zen 3 architecture to bear and oust Intel’s Core i9 as the best gaming CPU. The unexpected bonus AMD adds is a renewed focus on battery life, potentially solving a noted weakness in Ryzen-powered laptops.

AMD chief executive Lisa Su ushered in the new lineup of mobile chips as part of her keynote address at CES 2021, now held virtually rather than in Las Vegas. Su didn’t announce any new GPUs, but did say that the AMD RDNA 2 GPU architecture found within the RX6800 and similar chips will arrive in mobile GPUs in the first half of 2021, along with “mainstream” desktop graphics cards. She showed off a reference notebook running Dirt 5 at 1440p resolution and Ultra High settings at more than 50fps.

Processors, though, took center stage. AMD launched thirteen new chips in the AMD Ryzen 5000 Mobile series of processors, adding updated 5900HS and 5980HS flagship processors as well as the 5900HX, which AMD brags will be the “world’s best processor for gamers.” These high-end 7nm processors will top out at 8 cores and 16 threads, with turbo clock speeds maxing out at 4.8 GHz and many of them doubling cache sizes to between 19MB to 20MB for even more overall performance. While most of these new Ryzen processors are designed for 15, 35, and 45 watts, these new HX chips afford laptop makers the option for more than 45-watt designs.

If there’s a kicker, well, it’s that the rumors were (mostly) true: AMD mixed in some processors that use the older Zen 2 architecture inside the Ryzen 5000 series, without specifically distinguishing one from the other. You’ll want to pay close attention to which Ryzen laptop you buy beginning in February, when the new Ryzen Mobile 5000 family goes on sale. AMD didn’t publish the graphics capabilities of the new chips, either.

“Now, [many] good things have been written about the Ryzen 4000 series—various experts have called them game-changing, or rewriting the rules, and we really appreciate that,” said Robert Hallock, director of technical marketing for AMD. “But the 5000 series is even better. It’s really a remarkable product.”

AMD’s new processors include five processors within its U-series for thin-and-light notebooks, as well as eight more H-series chips for gaming notebooks. Both AMD and Intel have prioritized gaming at CES, as much to encourage sales of higher-end chips as well as to tap the groundswell of gaming that’s grown during the pandemic.

Here are AMD’s Ryzen 5000 series mobile processors. All of the new processors are manufactured on AMD’s 7nm manufacturing line, and all include simultaneous multithreading, too.

But while AMD claims that the “HS” lineup is then “ultimate in portable gaming performance,” there’s now something even better: the HX series. Can you actually go better than ultimate?

Apparently you can. The new Ryzen 9 5900HX, and by extension the HX family as a whole, are “the world’s best mobile processors for gamers,” according to AMD. While an HS-series chip like the Ryzen 9 5980HS is a 35W chip, the 5900HX and 5980HX are rated for 45 watts and above—how high, we’re not sure. AMD says HX-series processors are unlocked, too, so enthusiasts can tinker with their clock speeds.

Power: As important as performance, or more so

It may seem odd to focus on power rather than performance, but the gains AMD has made with its new chip may be more significant than just pushing its clock speeds and cache higher. With the Ryzen 5000 Mobile family, AMD has transitioned what it calls Collaborative Power Performance Control, a technique that migrates CPU clock and power control to the CPU’s own firmware, to the mobile space. Originally, the CPPC feature was part of AMD’s “Zen 2” desktop chips, offering minor performance improvements for the Ryzen 3000 series. But, since frequency affects power consumption, CPPC should have a more significant effect in a Ryzen laptop’s power usage.

Consider: Though the comparison is more than a year old, and pitted AMD’s older Ryzen 7 3780U versus the Intel Core i7-1065G7, this head-to-head comparison between otherwise identical Microsoft Surface Laptop 3s was especially compelling. Intel’s Core topped AMD’s Ryzen by roughly 10 percent in performance benchmarks, but absolutely whupped Ryzen by over 40 percent in battery life.

Since then, AMD has recouped those performance deficiencies, and then some. But director of technical marketing Robert Hallock said that CPPC would add two hours to a Ryzen Mobile 5000 notebook’s battery life, for a total of 17.5 hours of general usage and 21 hours of video playback. (That’s based upon a Ryzen 7 5800U notebook with a 53 watt-hour battery, playing a 1080p video and using the MobileMark 2018 benchmark. The screen brightness was not disclosed.)

“It’s easy to add additional performance to an SOC. It’s much harder to deliver great battery life alongside that. But that’s what we’ve managed to do with Zen 3, with seven-nanometer, and with the Ryzen 5000 series,” Hallock said.

For many, though, performance is king. And AMD certainly made the argument that the Ryzen 5000 Mobile can certainly compete with, if not blow away entirely, the best that Intel has to offer. (You can compare AMD’s own results with Intel’s own numbers in the mobile 11th-gen “Tiger Lake” presentation Intel released at CES Monday.)

First, gen-over-gen scaling. Pay close attention to the single-threaded scores posted by the Ryzen Mobile 5300U, 5500U, and 5700U scores, as we’ll talk about those more in the next section.

Kick it up a notch with the Ryzen 9 5980HS and the gains are still impressive.

AMD also touted the ability of the Ryzen 5000 Mobile to compete against its own 4800U as well as the Core i7-1165G7. Here, the metric is PCMark’s productivity apps, though there’s sharp gains in Excel and PCMark 10, two of the more intensive apps within the Microsoft office suite.

In gaming, though, AMD had an opportunity to finish Intel off—and really didn’t. The 3DMark Fire Strike Physics scores are certainly impressive, but AMD didn’t actually provide any benchmark scores for games in metrics provided to reporters.

Early rumors pegged some of the new Ryzen 5000 Mobile processors as using older “Zen 2” cores as opposed to the latest Zen 3. AMD’s “Lucienne” chips were reportedly designed around AMD’s older Zen 2 architecture, and “Cezanne” around the more powerful Zen 3 architecture. AMD’s Ryzen 5000 Mobile series included both, those rumors said, without distinguishing one from another. Those leaks were, in fact, mostly accurate.

Three of the new Ryzen 5000 mobile processors—the Ryzen 7 5000U, the Ryzen 5 5500U, and the Ryzen 3 5300U—use the Zen 2 microarchitecture, according to AMD. Unfortunately, there’s no marks or acronyms to distinguish them from the other processors within the family. As the benchmarks above showed, however, even the “Zen 2” members of the Ryzen Mobile 5000 series are slightly faster than their Ryzen Mobile 4000 predecessors. If you’re interested in avoiding any potential confusion, however, the answer is simple: simply buy one of the new Ryzen 5000 H-series processors.

What’s important for AMD is the number of processors it sells. In this, the company may have already notched a success, building upon its designs wins in the previous two generations. AMD said that 150 separate mobile PCs will be built upon the Ryzen Mobile 5000 family, versus 100 in the prior generation. In the end, those numbers indicate that AMD has established itself as a leading-edge processor supplier in the eyes of its PC customers.

Clarification: We’ve updated the caption listing all of the new Ryzen 5000 Mobile processors to note a change in the published cache sizes that AMD included after publication.