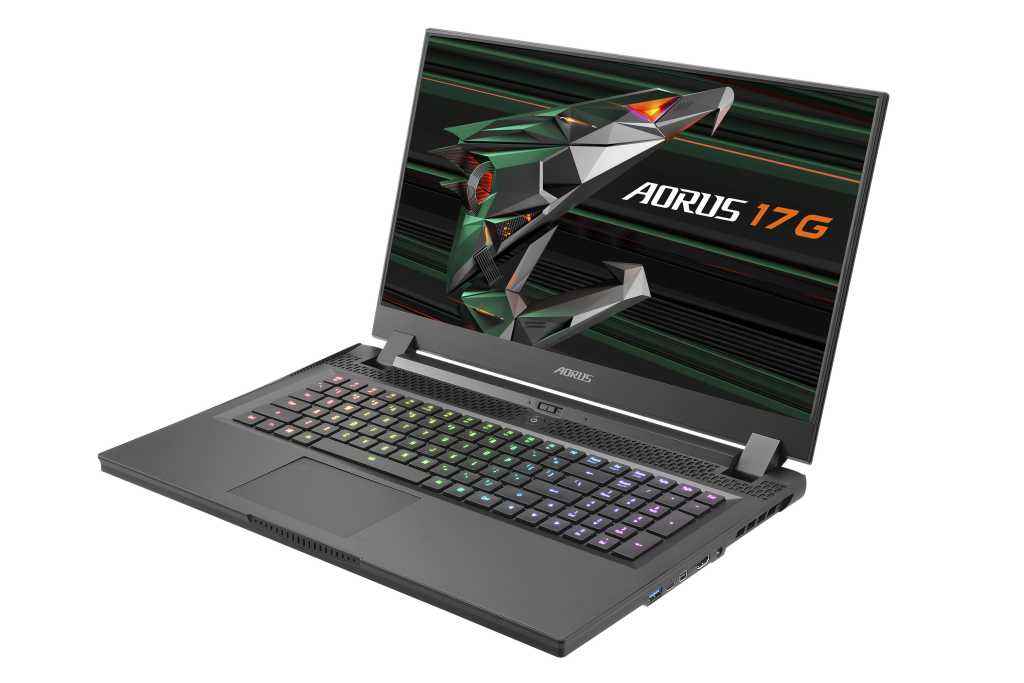 Gigabyte will adopt Nvidia’s new 30-series GPUs across its powerhouse Aero and Aorus laptop lines—and finally offer Ryzen 5000 alongside its Intel-based laptops, too. Announced at CES, pricing and availability weren’t immediately available, but we do know a fair amount about the features.

We’ll start with Gigabyte’s Aorus family, which is aimed at gamers. The largest and likely the most powerful is the Aorus 17G. As its name implies, it’s a 17.3-inch laptop that will feature a mechanical keyboard using Omron switches, and up to a GeForce RTX 3080 Max-Q GPU and 8-core Core i7-10870H CPU.

There are caveats wth the 17G. As a Max-Q variant of the 3080, the graphics memory is cut in half to 8GB. Also, the laptop’s fairly thick 26mm body and 6-pound weight strain the definition of portable. It’ll get the last laugh in performance testing, though: We’d guess it’ll outrun other 17-inch laptops with thinner bodies and lighter weights. There is an option for an RTX 3070 version as well.

Some of the weight in the Aorus 17G comes from the larger 99-Watt-hour battery, which Gigabyte says will give you “all day battery life.” That likely means “all day, as long as you don’t run that CPU or GPU hard.” To be fair, though, Gigabyte uses hybrid Nvidia Optimus graphics on all, so battery life may be decent on light loads.

Storage options include two M.2 slots, both supporting NVMe and one also supporting SATA. The port selection, which looks nearly identical to that of the previous RTX 20-series Aorus 17G, includes three USB-A ports, a miniDisplayPort 1.4, HDMI 2.0, Thuderbolt 3, 2.5Gb ethernet using a Realtek controller, UHS-II SD card reader, and separated headphone and microphone jacks. Because it’s a gaming laptop, the panel option looks limited to 1080p at 300Hz, but it is Pantone factory-certified. There is a low-mount webcam as well.

Interestingly, while the Aorus lineup will top out at Intel’s new 8-core, 5GHz Core i7-10870H, both of the Aero models offer the Core i7-10870H or the top-end 8-core Core i9-10980HK, which can boost up to 5.3GHz. We believe it’s because Gigabyte targets the Aero to creators and part-time gamers who could take advantage of a small boost in CPU performance. GPUs on both will range from GeForce RTX 3060 Max-Q to GeForce RTX 3080 Max-Q

Much like the Aorus line, the Aero line closely resembles its forbears externally, with the same generous serving of ports: three USB-A, one Thunderbolt 3, HDMI, miniDisplayPort, UHS-II SD card reader, 2.5GbE LAN, and analog audio port. Both Aeros continue to use their signature 99-Watt-hour batteries as well.

G and A Series