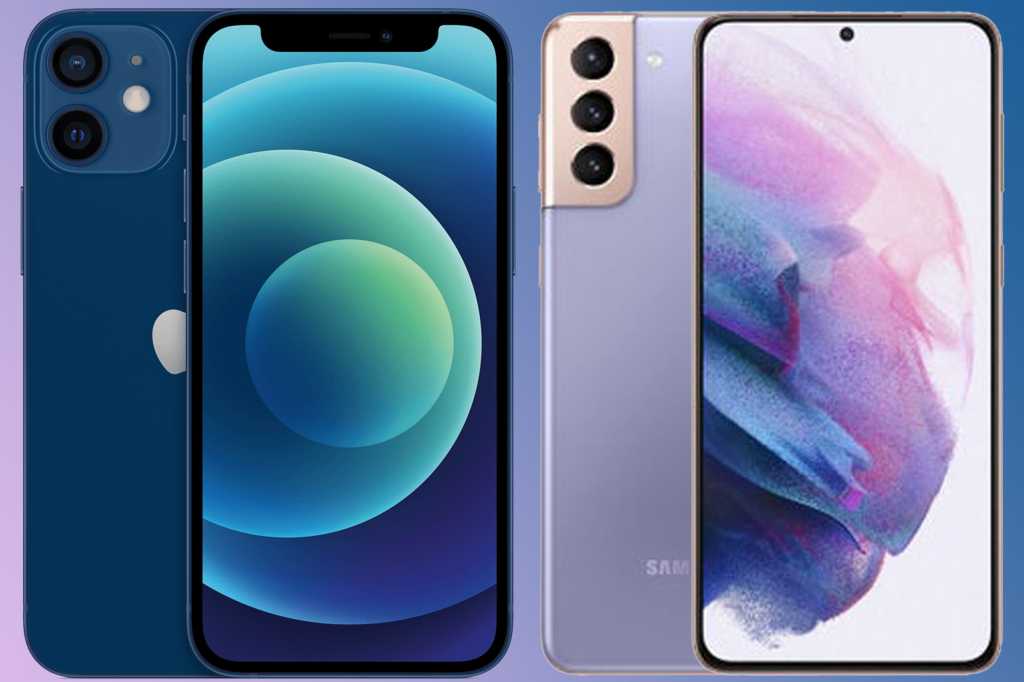 January has barely begun and we already have our first heavyweight smartphone battle of 2021. Samsung has released its lineup of Galaxy S21 phones a little earlier than usual this year, and it’s clear they have Apple’s newest phone in its sights. Samsung hasn’t reinvented the S21 as much as it’s retooled it to take on the iPhone 12, with a lower price point, sharper design, and some new camera tricks. Now that I’ve had a chance to review both handsets, here’s how the two $800 phones stack up.

Samsung’s Galaxy S is always at the forefront of Android smartphone design, and the S21 continues that tradition. Samsung has crafted a truly unique design where the metal sides seamlessly blend into the camera array, as if it were snapped onto the back. The back is made of plastic rather than glass, but it still has a premium feel, even if it’s not quite as luxurious as the S20.

Of course, the iPhone is no slouch in the looks department. Apple introduced a new, flatter design with the iPhone 12 that has a retro charm reminiscent of the iPhone 4, and it feels great to hold. The square camera array is nearly identical to the iPhone 11’s and not nearly as unique as the S21’s.

The two phones are very similar in size. The S21 is slightly bigger and a bit heavier. However, Samsung has done a fantastic job with distributing the weight on the S21, so it doesn’t feel as heavy as it weighs:

Both phones come in a variety of colors that basically boil down to personal preference, but Samsung’s unique design stands out here as well. The camera array is treated as a design element and is made to stand out with a bold metal housing. It’s one of the most unique designs Samsung has ever made, and it makes the iPhone 12 look a little stale. My pick: The Galaxy S21

Now that Apple has gone OLED and Samsung has gone Full HD, the iPhone 12 and Galaxy S21 have very similar displays:

Marketing terms and tenth-of-an-inch aside, the only real difference between the two displays is the refresh rate. Samsung is once again using a 120Hz screen on the S21, and this year it’s adaptive, meaning it will switch dynamically from a high refresh to low, depending on what you’re doing, in order to save battery life.

You’re also choosing between a hole or a notch. The iPhone 12 sticks with the rather large notch at the top of the screen that houses the TrueDepth camera and sensors for Face ID, while Samsung has a small hole in the center for its selfie camera.

The iPhone 12’s display is excellent, and thanks to the speed of system-on-chip, it feels extremely fast. But the S21 takes it a step further with its buttery-smooth scrolling that feels effortless. My pick: Galaxy S21

As usual, both phones feature the very latest in chip tech. The iPhone uses Apple’s own A14 Bionic processor, while the S21 sticks with Qualcomm’s Snapdragon 888. Both phones are extremely fast—more than the average app will ever need—but once again, the iPhone takes the crown.

When it comes to memory, Samsung has dialed back the RAM a bit from the S20’s ridiculous 12GB, but the 8GB inside the S21 should be plenty. Apple has only 4GB in the iPhone 12, but iOS 14’s optimizations make it seem like there’s much more. Both phones were able to store dozens of recent apps screens and handle transitions and app switching without an issue. Samsung also beats Apple with base storage, offering 128GB in the S21 compared to the iPhone 12’s 64GB, though you can upgrade to 128GB for $50.

Battery life is a bit more complicated. On paper, the S21 boasts a 4,000mAh battery versus the iPhone 12’s 2,815mAh one, but real-world results will be much more important. The iPhone 12’s battery life bested that of Android phones with nearly twice as much battery capacity in 2020 and it outperforms the S21 here too. It’s not a total romp though. Both phones did well to last through an entire day, though I tended to get a bit more juice with the iPhone 12.

When it comes to charging, neither phone includes a charger in the box, though both phones offer fast charging with a capable charger, 20W with the iPhone 12 and 25W with the S21. They both offer 10W wireless charging as well, and the iPhone also offers MagSafe magnetic charging via optional accessories.

Elsewhere, both phones have sub-6GHz and mmWave 5G, and Wi-Fi 6 for speedy connectivity, as well as IP68 water resistance. The iPhone 12 also has a U1 ultrawide band chip for precise location mapping, but you’ll need to upgrade to one of the other models (S21+ or S21 Ultra) to get that on the S21. Like last year, the iPhone 12 has 3D facial recognition, while the S21 has an ultrasonic in-display fingerprint sensor, which is improved but still not as secure or speedy as Face ID. My pick: iPhone 12

Somewhat surprisingly, both Samsung and Apple opted to stick with similar camera hardware compared to their respective predecessors. In the S21’s case, the triple-camera system is identical to the S20’s, while Apple only slightly upgraded the wide-angle sensor on the iPhone 12 with a wider aperture (f/1.6 vs f/1.8).

Instead, the improvements are mostly behind the scenes and like Google, Apple has more than proven its ability to process stellar photos. Time after time, the iPhone 12 produced photos with crisper details, better color, and sharper contrast, where the S21 often overexposed shots and missed some elements. It’s definitely subjective and both phones will snap reliably good photos in a snap, but I preferred the iPhone 12 in nearly every instance, from bright to low light.

However, the iPhone 12 doesn’t have anywhere near the power of 30X zoom. In fact, it doesn’t have a zoom lens at all, so you’ll need to get very close to your subject. That’s not something you’re going to need all that often, but when you do, the S21’s telephoto abilities blow away the iPhone 12, which maxes out at 5X. However, unless you’re planning on taking numerous far-away shots, the iPhone 12 is simply the superior shooter. My pick: iPhone 12.

As always, you’re getting the latest OS with each of these phones—One UI 3.1 based on Android 11 with the S21, and iOS 14 with the iPhone 12—but the future isn’t quite as clear. Since the launch of the Galaxy S20, Samsung has promised all new phones will get three generations of Android updates, so the S21 is guaranteed to get Android 14 when it arrives in 2023. Apple technically offers no such guarantee, but iPhones are generally supported for five years of upgrades. For example, the iPhone 6s, which launched with iOS 9 in 2016, got iOS 14 when it landed in September.

You’re also guaranteed to get iOS updates on the day they arrive, something that isn’t so certain with the S21. While monthly security updates land quickly, new versions of Android often take months before they arrive on the latest phones. My pick: iPhone 12

Samsung and Apple have been competitors for as long as they’ve been making phones, but it’s been a while since they’ve had phones that were such close competitors. Both phones are fantastic and either will bring exceptional value compared to nearly every competitor. However, if OS to a specific color isn’t a factor, I’d go with the iPhone 12, despite its somewhat stale design. You won’t be unhappy with the S21, but you’ll be a little happier with the iPhone 12.